The Sony Xperia XZ is the flagship that may be a little late but looks capable of calming the fears of crisis. This successor to the Xperia X (XZ may as well stand for X2, doesn't it?) focuses on a few important points: design, performance, camera, and battery life. 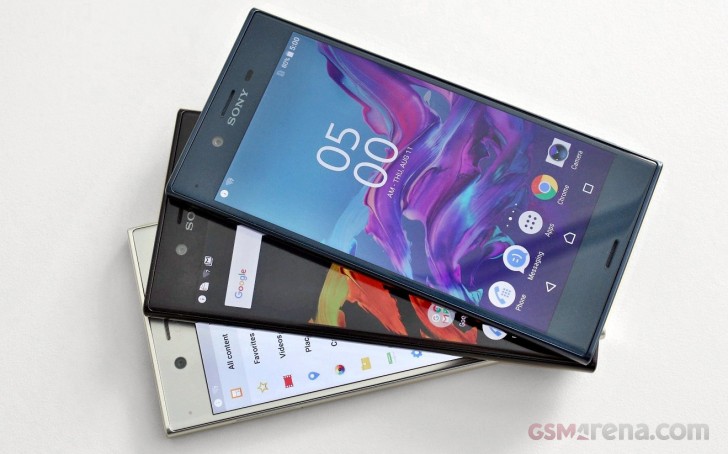 The updated design called looped surface is definitely consistent with what Sony has been doing lately, yet fresh and elegant. Whether it is a combination of metal and glass, or plastic and glass, the rounded edges that seamlessly connect with the rounded screen and rear do look great.

The Xperia XZ is the first to use this new signature design and naturally it had to come with a special signature color, which in the XZ case is Forest Blue. Rumor has it Apple is also ready to make some shade of blue a default paintjob for the iPhone 7, but Sony is the one claiming "first", at least for this year.

The XZ flagship has another charm you can experience the moment you touch the device, the ALKALEIDO material. The official statement on this alloy is quite sugar-coated - high brightness and purity, premium shine, depth. Behind the buzzwords, it's a molded piece of aluminum that's very nice to the touch and rather smudge resistant.

Sony put a bigger 5.2" IPS display on the Xperia XZ, still 1080p resolution. The screen looks great with wide viewing angles, high contrast, and punchy colors, especially when it comes to browsing multimedia. The bezels are not impressively slim though.

Yes, the new design is great and the phone is a pleasure to handle. But there is one thing we would have liked to be better thought out - the back strip at the bottom that covers the antennas. It somehow disturbs the whole seamless design and takes away from its perfection.

The antenna strips on the back

Specs-wise the Xperia XZ is a flagship by the book - there is a Snapdragon 820 chip with 3GB RAM, top-notch connectivity options, stereo speakers, and 32GB storage with expansion up to 200GB via a microSD card. The new USB Type-C is welcome as its adoption rate is growing stronger, while water-proofing is an Xperia staple revived.

One of the highlights of the new Xperia XZ is its main 23MP camera with a f/2.0 lens. It may look the same on specs, but Sony developed a new IMX300 sensor for the XZ and X Compact, which has a new autofocus system.

The camera does not feature optical image stabilization - Sony is still on the fence about that. Instead Sony focused on its SteadyShot Intelligent Active Mode which now uses 5-axis gyroscope measurements (accounting for angle, roll, and shift shakes) to stabilize pictures and videos. This mode was also present in the Xperia X and X Performance but it lacked adjustments for shift shake.

By popular demand, Sony is adding manual shutter speed control and is bringing back the 4K video and it supports 2x lossless zoom.

Sony Xperia XZ does look gorgeous and slimmer than it really is thanks to its curved sides. There's a SIM/SD slot on the left, under a flap, and the three hardware keys on the right - power, volume, camera.

A peek around the sides of Xperia XZ

The power key also doubles as a very comfortable fingerprint scanner, which we are quite fond of.

The back of the silver Xperia XZ is quite unimpressive in terms of looks - the camera, its sensors and a single LED flash are obvious, as is the strip at the bottom hiding the antennas. Those look much better on the Mineral Black and Forest Blue flavors though.

Finally, the XZ is powered by a 2,900mAh battery - a subtle upgrade over the X Performance. It is capable of Quick Charge 3.0 but you'll most probably have to buy a Sony fast charger, which is likely not bundled in. The battery also supports adaptive charging called Battery Care (an extension over Qnovo's charge) for prolonging its lifecycle - it learns when you are charging your battery overnight, stops fast charging around 90% and continue to gently charge your battery up to 100% until the morning. In theory this should double its lifecycle.

The Xperia XZ will launch in early October and is positioned above the Xperia X Performance meaning the best Sony has to offer. This also means you could expect a price tag north of €700.