The Xperia mini pro uses the traditional droid Gallery, which hasn’t really seen much change in Gingerbread. It has good functionality, cool 3D looks and nice transition effects, but unfortunately only shows a downsized version of your images.

There is no dedicated video player app on the Xperia mini pro as in most of the droids out there. Fair enough, maybe a fancy UI for picking a video is not that important, playing videos is what really counts. Well, that’s another disappointment – the video player supports only 3GP and MP4 videos.

To its credit, the Xperia mini pro did play a 720p MP4 video though (it records 720p videos, so it's expected to). And the 3 ” HVGA Reality screen is a pure joy to watch.

You are welcomed to download a capable video player off the Android Market and make your life easier though.

Watching a video on the Xperia mini pro

The music player on the Xperia mini pro is quite a looker. The interface is laid out in four tabs for the available sorting options: all artists, all tracks, playlists and albums.

The music fans will appreciate the equalizer: it’s a rich selection of presets. There is also an xLOUD setting to enhance the device speaker volume.

The Sony Ericsson Xperia mini pro is also equipped with an FM radio, which has a really neat and simple interface. It automatically scans the area for the available stations and places “notches” on the frequency dial for easier scrolling to the next station. Or you can mark some of them as favorite for easier scrolling.

Sony Ericsson droids have rarely disappointed in terms of audio quality and we were glad to find out that the Xperia mini pro isn't be an exception to the rule. The tiny messenger did pretty well in our audio quality test, especially when there was no resistance applied to its line-out.

When you use the mini pro with your home or car stereo its output is about as perfect as it gets. That observation is convincingly confirmed by the numbers in the table below.

Naturally, there's some degradation when headphones are connected, most notably in terms of stereo crosstalk and intermodulation distortion. Still, the mini pro remains quite a lot better than average and, in general, performs better than you could probably expect given its price tag and focus. It's good to know that even for that kind of cash you don't need to choose between solid smartphone experience and good audio output. 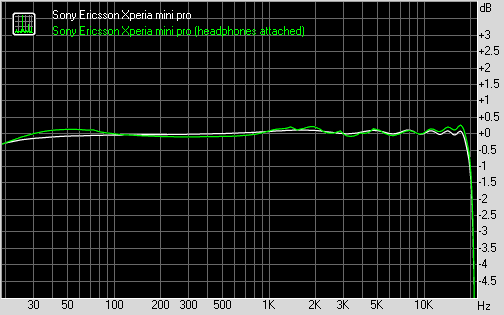