The Sony Ericsson XPERIA X1 also features a built-in GPS receiver - it's the same Qualcomm gpsOne chipset, which we found on the competing HTC models. This of course is hardly a surprise.

The X1 supports the Assisted-GPS technology, commonly known as A-GPS. It means you can download current satellite data over Wi-Fi or the 2G/3G network for a much faster satellite lock.

Unfortunately much like the HTC Touch Pro, the XPERIA X1 doesn't have a GPS navigation application pre-installed, so you have to purchase one separately. Just to get you started, there is Google Maps pre-installed. With a dedicated GPS app installed, it performed admirably as an in-car navigation unit.

When it comes to displaying maps on screen, the WVGA display is undoubtedly a great advantage. It offers much more detail than the iPhone for example at relatively the same level of magnification.

While we are pretty happy with the GPS sensitivity of the Qualcomm gpsOne chipset, the same doesn't go to its energy efficiency. The competing SiRF Star III chipset is much better at that. Coupled with the high-res display, the XPERIA X1 simply cannot offer as much power autonomy with the GPS switched on.

We now come to one of our favorite parts of the review - the Tweaks and Modding chapter. PocketPCs have long been enjoying custom modding, patching and tweaking. Luckily for the XPERIA X1 it quickly earned itself a large number of fans that are constantly on the lookout for a new twist to their gear.

The first and probably most significant change you can make to your XPERIA X1's user interface is borrowing the HTC TouchFLO 3D. Yeah - you can have a fully functional TouchFLO 3D UI on your XPERIA X1 in a matter of minutes. All you have to do is install a cab file - simple as that. You can find more information on the topic right here. 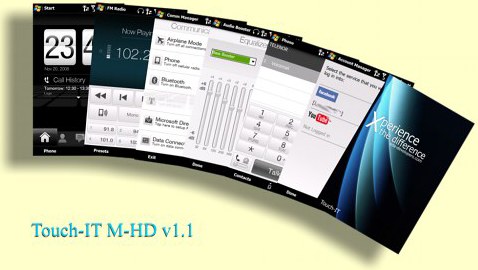 Over at the XDA-Developers forum you can also find a dedicated chapter for the modifications of the TouchFLO 3D that the XPERIA users have done. You can download custom fonts, icons, and themes.

The TouchFLO 3D can even be added as a separate panel on the X-panel interface etc. How cool is that - you can now have both interfaces on a single device and alternate them as easy as switching the panel.

While this next one won't count as a big tweak, but still we think it's a must-have. Changing the small and dull virtual QWERTY keypad for a more thumb-optimized version is high on our priority list.

You can either use the version ported from the HTC Touch HD or any other of the thumb optimized keyboards out there.

There is a wide range of additional tweaks for the XPERIA X1 - from the customizing the LED illuminations through enabling YouTube and adding haptic touch feedback to changing the hardware keyboard layout and creating your own HTML panels. But instead of copying text over, we can just point you to the most popular tweaks gathered all in one place.

Looking back at Sony Ericsson XPERIA X1 we think there's one major question to answer. Now, no need to get defensive - the X1 sure is impressive. It goes even further to outperform its main rival - the HTC Touch Pro - in a number of areas and even offers slightly larger display and higher resolution.

However since the QWERTY keyboard is one of the key selling point and the Touch Pro has such great advantage there the choice between the two is really hard. And with the two month advantage that the HTC had we are quite confident that most users have already sealed a deal.

Still the Sony Ericsson XPERIA X1 is a really good device, the purchase of which you are unlikely to regret. It is unable to solve all the usability issues of the underlying Windows OS but if modding and tweaking is your thing, you can achieve quite good results.

And the thumb-optimized X-Panels are quite a treat adding the essential fun element to the XPERIA user experience. We wouldn't by any means strongly recommend the X1 to non-Windows fans but they might still check it out - steps in the right direction are being taken.