Earlier this month we saw a vivo phone codenamed “Waterdrop” with a unique design that raised quite a few questions. The mystery will be unveiled on January 24 when the company will reveal more, according to a Weibo post on the official vivo profile. 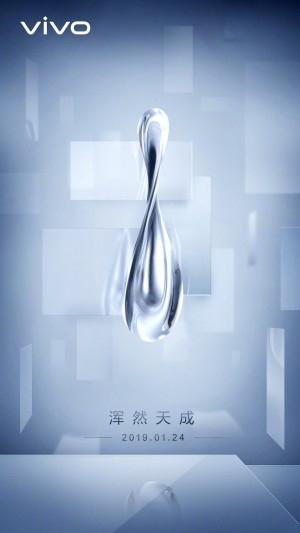 A vivo invite for the waterdrop reveal

This image is as vague as it gets. We don’t know what the actual footprint will be or what specs should we expect. A well-known leakster previously said this new phone will “subvert people’s past perception of smartphones”.

There is a real possibility vivo might be revealing just a concept smartphone, similar to the APEX Phone shown at MWC 2018. Later it got a complete makeover and was launched as vivo NEX, so the company might be following suit with this waterdrop solution as well.

With Vivo "Water-Drop" design and OPPO 10x optical zoom leading the way, 2019 with be another year of triumph for Chinese phone makers. Hopefully Samsung will deliver a quality foldable phone this year. Will not expect anything really new from Apple...

Vivo will be a real mover of smartphone design and technology for 2019, again.

It won't look like twisted anything, the previous story teasted images: https://www.gsmarena.com/vivo_phone_codenamed_the_waterdrop_is_coming_with_a_unique_design_-news-35020.php I'm guessing it'll use the fused glass technique to make it seam...