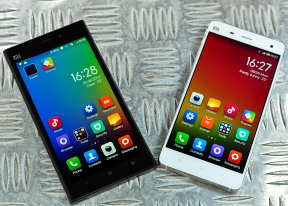 Both the Xiaomi Mi 3 and Mi 4 run Android 4.4 KitKat with absolutely identical MIUI v5 launchers. The MIUI ROMs have been around for quite a while and are fairly popular among the Android community. Xiaomi's customizations run very deep, as far as getting rid of the app drawer and placing all available apps on the homescreen.

On top of that, Google's apps and services are replaced by their Chinese equivalents (more likely if you get a Mi 4, the Mi 3 is already available with a familiar software setup). Either way, the Play Store is no big deal to install, so you'll get your phone in shape in no time.

Xiaomi has already announced the new MIUI v.6. It brings a complete UI overhaul with flat looks, and updated system apps. It should become available on the Xiaomi Mi lineup later this year.

Here come our traditional UI walkthroughs to get you warmed up.

As we said there are no differences in both phones in terms of software packages. The Google Services are not available on the Xiaomi Mi phones that sell in China but those can be installed. Xiaomi has a different policy about preinstalling the Google services for the different markets so future regional versions will probably come with Google services preinstalled. Right now the Mi 4 is only sold in China so we had to install those manually on our review unit.

The lockscreen looks very familiar and we've already seen similar in Huawei's Emotion UI. There is centered circle with shortcuts in the four cardinal directions: a simple unlock to the South, start the camera to the North, messaging is to the East and the dialer/call log is to the West.

Beyond the lockscreen is the Android homescreen with four customizable shortcuts docked at the bottom, but you can dock up to five items. You can have any app there or even folders with multiple items.

The MIUI homescreens • there is no app drawer

There is no app drawer - anything you install pops up on your unlimited number of homescreens. There're no shortcuts and the usual routine of removing icons (dragging them up to a recycle bin at the top of the screen) will uninstall the corresponding app. The thing is fool-proof and you can't accidentally uninstall essential apps like the gallery or email client.

Homescreen widgets are available, too - tap and hold on the homescreen, then choose Widgets. Of course, you can get third party widgets from the Play Store. By the way, Xiaomi's proprietary Search widget does a similar job as iOS's Spotlight system-wide search.

Homescreen effects are available from the customization menu. You can change themes, too. A theme will change your homescreen wallpaper, lockscreen style, system icons, system font and the sound profile.

The notification area has two tabs - the first one holds all notifications, while the second is a 4x4 grid of toggles. You can add, remove and rearrange toggles. The Quick Settings tab is the one that opens by default unless you have unread notifications. Nice touch though we saw some people get confused by this fact.

As far as the smart assistants are concerned - you can either opt for the familiar Google Now (you can install Google Search if it is no available by default) or you can launch Xiaomi's proprietary Voice Assistant. The latter looks a lot like Siri in both user interface and functionality, but unfortunately works only in Chinese and we couldn't test it as our Chinese is a bit... well, rusty.