Well what do you know - another smartphone company is updating its smartphone with the latest Qualcomm chipset. Xiaomi just announced on Weibo the arrival of Black Shark 2 Pro version on July 30. It's not hard to guess the main upgrade that one will bring - the newly unveiled Snapdragon 855 Plus chipset. 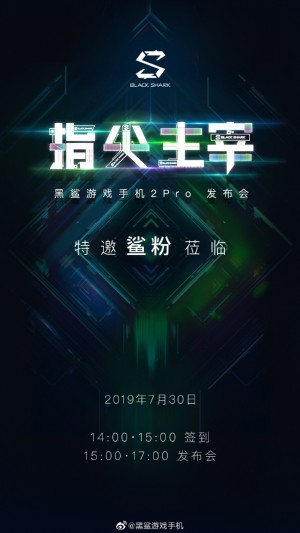 The official poster by Xiaomi

The launch announcement comes just two days after nubia’s confirmation that it will update is Red Magic 3 gaming smartphone with Snapdragon 855 Plus in the future in a response to Asus’ launch of the ROG Phone 2 on July 22.

The difference between Snapdragon 855 Plus is slightly faster GPU - about 15%. The first CPU cluster is also overclocked from 2.84 GHz to 2.96 GHz, which in the grand scheme of numbers is just a 4% increase.

It's unclear if the Black Shark 2 Pro will bring upgrades beyond the chipset - a higher refresh rate screen would really go a long way to making in more competitive in the quickly evolving gaming smartphone market.

I wonder if LG will release a gaming phone (?).

Still SD855 is good enough and Kirin 990 will outbeat this snapdragon like nothing.