In a couple of days Apple is holding an event during which it will finally refresh the extremely long in the tooth MacBook Pro line of laptops. Details about the features of the new models have been leaking for months now, but today we get a confirmation for a few of them from the unlikeliest of sources: Apple itself.

Hidden inside the macOS Sierra 10.12.1 version that started going out yesterday are two images depicting the upcoming MacBook Pro. But wait, that's not all! The oft-rumored OLED strip is clearly shown above the row of number keys. This will replace the function keys, and will show you different things depending on context. Needless to say, it's touch-sensitive. 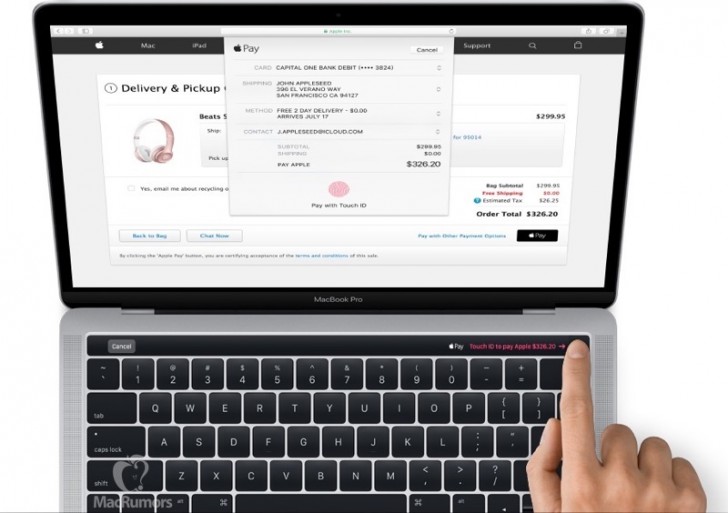 It turns out the strip has another trick up its sleeve, though - the Touch ID fingerprint scanner seems to be part of it, not the power button as previously thought. So, in the example above, if you want to confirm an Apple Pay transaction, you just place your finger at the far right end of the strip, and that's it.

This OLED touch panel may end up being called Magic Toolbar, because Apple really, really likes the word "magic". The overall design of the new MacBook Pro is not a huge departure from past models, which might squash some people's dreams. The 13-inch model seems to be shown in these images, and if so then it means it will get speakers to the sides of the keyboard as you can see. The hinge is redesigned too, so past rumors saying the next MacBook Pro generation will be thinner may pan out indeed.

The keys look flatter than on this laptop's predecessors, as Apple could have opted to use the new butterfly mechanism first tried in the 12-inch MacBook. Aside from two MacBook Pros (13" and 15" versions), a new 13" MacBook Air is expected on Thursday.

Same argument was made a few years back by Nokia and their smartphones. I wonder what happened to them?

why need touch screen when u can control everything with touchpad ?

It is time for apple to do a touch screen macbook Pro and show some proper stuff, Laptops life is coming to an end and Apple is still milking us slowly without giving us the end product that we seek. Not a smart move. then this C-USB cable crap and c...