Asus just announced the Republic of Gamers Phone II, a follow up to last year's ROG Phone. We were invited to attend the launch event and spend some time with the handset and see what's new and improved for ourselves. 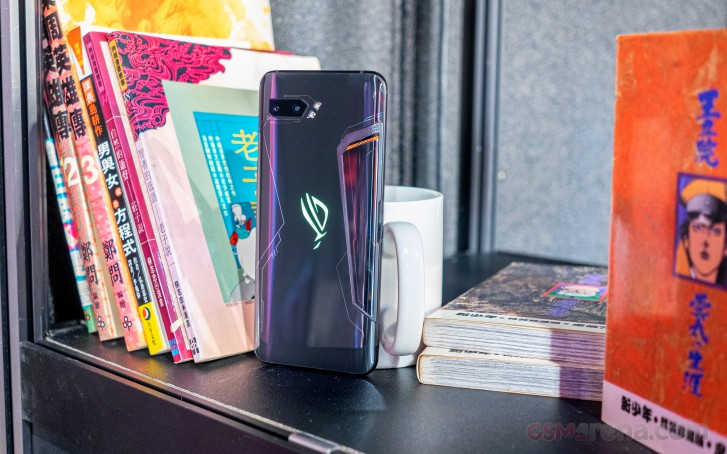 For starters, the second-gen ROG Phone has seen its display grow to 6.59" in diagonal from the original's 6". It's still an AMOLED panel, but a year later there's a fingerprint reader underneath it to replace the irksome off-center back-mounted solution on the original. Of course, like any self-respecting gaming phone, the ROG Phone II's display has a high refresh rate - 120Hz, complete with 240Hz touch readout.

The ROG Phone II is the first handset to utilize Qualcomm's updated Snapdragon 855 Plus, which comes with higher clocks on the high-performance CPU core and the GPU, in effect offering 4% and 15% improvements, respectively, in the chipmaker's own words. You can have the ROG Phone II with up to 512GB of storage and it's UFS3.0 - Asus says that allows it to achieve 15% faster load times in games than the UFS2.1-equipped Galaxy S10+.

Of course, the ROG Phone II comes with support for a ton of accessories - a whole suitcase of those. To a great extent they're familiar from the first generation and include two different desktop docks, an improved mobile dock that adds an extra screen and a snap-on controller. That's in addition to the snap-on external cooling fan that you'll find in each ROG Phone II box. Most of these use the handset's proprietary USB-C-and-then-some connector on the side, but there's a regular USB-C port on the bottom too. The Zenfone 6 lends the ROG Phone II its dual camera setup, the 48MP primary module and the 13MP ultra wide angle have found their way to the gaming phone's back. With no flippy action on the ROG Asus, there's a dedicated selfie cam on the front.

Another upgrade is the battery capacity - the ROG Phone II now comes with a 6,000mAh power pack. That's more than you can have on any other big-name high-end smartphone, gaming-centered or otherwise. The loudspeakers, two of them in a stereo setup, have been tweaked as well to deliver more decibels.

We'll try to go over the changes in more detail on the following pages garnished with our initial impressions. We'll also have a quick look at the contents of that suitcase and compare against the ones we got with the original ROG Phone. Hit the next page button to get going.

Does this phone is waterproof