If you think the ROG Phone II is too large, you're probably not part of its target audience - Asus' research has shown that gamers want the biggest possible screen and they don't care much about weight. Hence, the handset's 6.6" screen diagonal and considerable 240-gram heft. 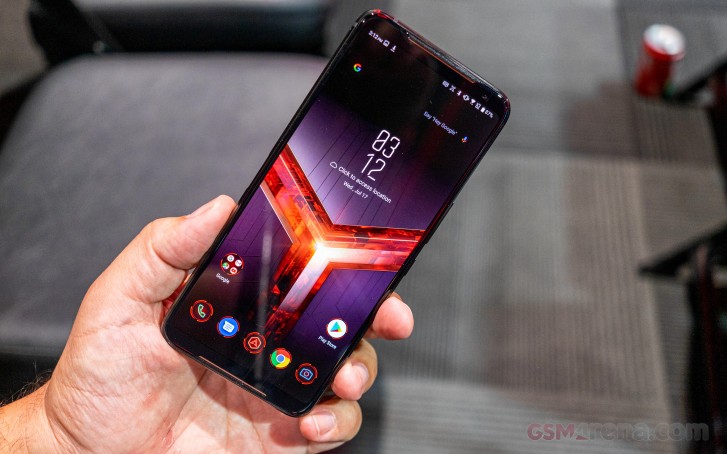 Still, to stay within reason, Asus kept the width at just under 78mm - stretching a thumb across is feasible, but the top of the display is out of reach even for the longest of fingers when you're operating single-handedly. 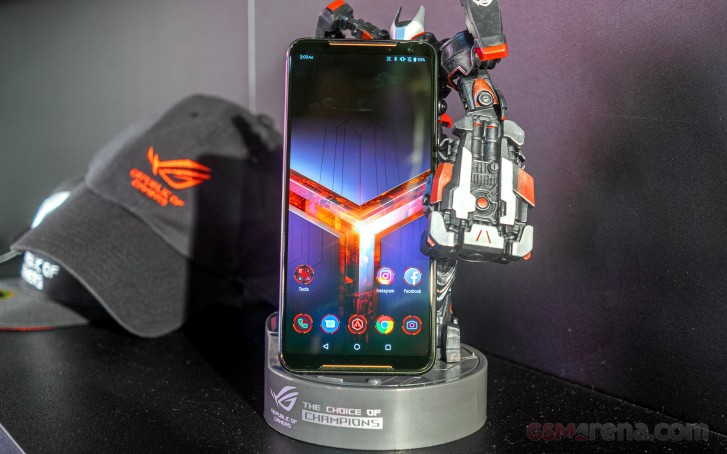 The taller aspect of the screen bears some of the responsibility - it's 19.5:9 now, as opposed to the 18:9 ratio of the first ROG Phone, but there are also the speakers on both of the screen's ends that take up space. Asus says it's fitted larger chambers making the new setup 2.5x times as loud - we can certainly attest that the ROG Phone II sounds loud and clear even in the crowded venue we had the phone in. Of course, for the exact numbers you'll need to have patience until the full review. 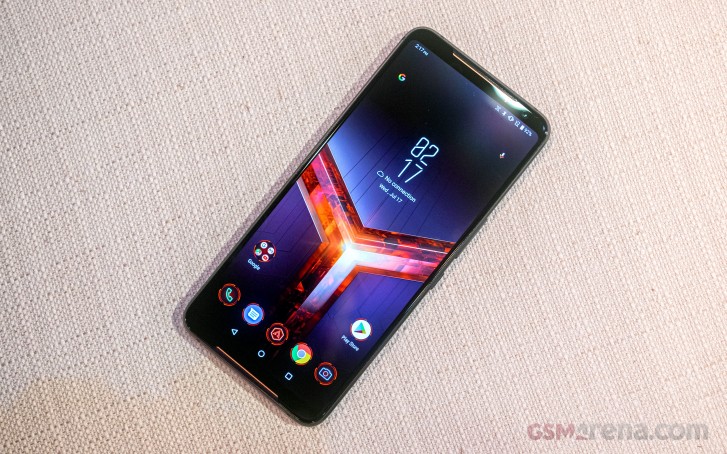 The speakers also support DTS:X Ultra which means they can reproduce multi-channel sound and with the right source, they sound amazing - you can clearly discern how the sound stage changes and moves around during the demo playback.

Now, the ROG Phone II might have grown in size, but the design style has remained mostly unchanged - it's the same 'gamer' aesthetic with a hint of moderation which we saw on the first ROG Phone. It means that 1. the phone is easily recognizable, and 2. it's not too childish. 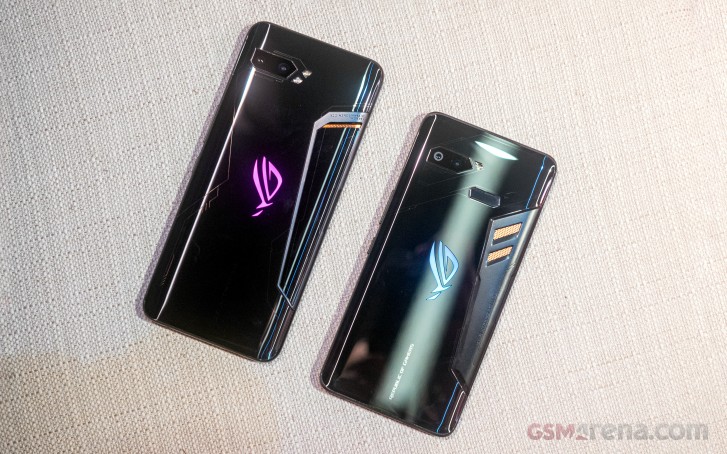 Asus ROG Phone II (left) next to the original

The tactical knife-inspired accent along the right side of the back is sort of a signature touch, and Asus has kept an orange grille-looking element in there, but it's a lot smaller, and just one - generation one had two of those, and bigger ones. 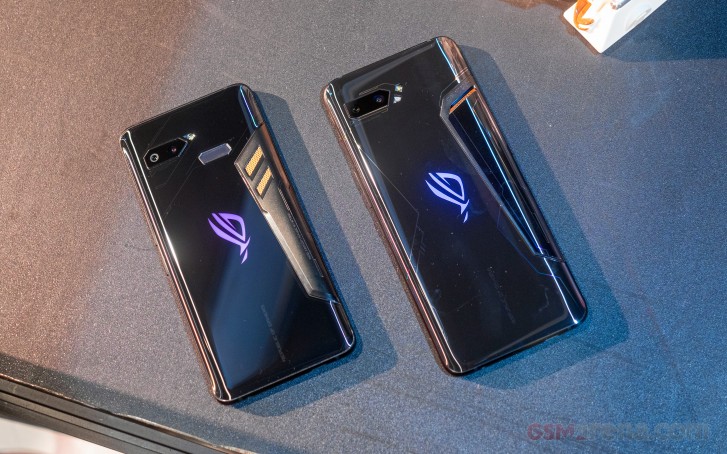 Asus ROG Phone II (right) next to the original

The ROG logo sits front and center and, naturally, has RGB LEDs supporting the brand's Aura protocol lighting it up. In the top left corner, there's the dual camera setup with a sharply outlined window and a dual-LED flash next to it - the original ROG Phone had a single LED. The previous model had a conventional capacitive fingerprint sensor (which we hated for a number of reasons) in these whereabouts, but that's gone now. 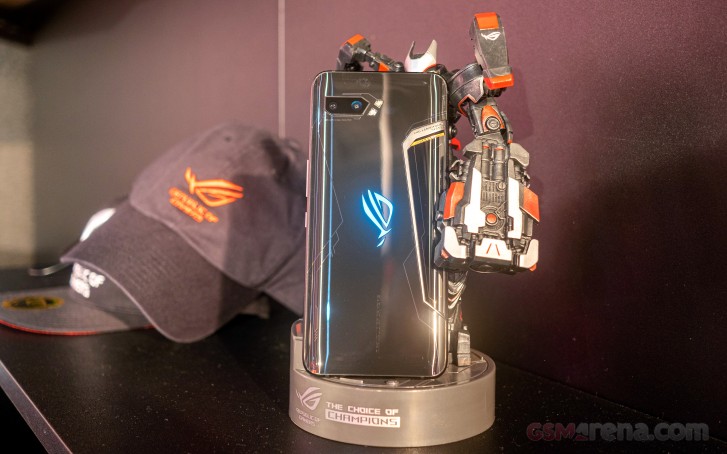 Mind you, we're looking at the hardware version that's headed for the Chinese market, which has a gloss finish on the back. The international variant will have a more conservative matte look, we've been told.

Flipping over to the front we're seeing the nice big AMOLED display, and it's a real beauty. It's the first OLED display with a 120Hz refresh rate on a smartphone, and apparently on any piece of mass-produced hardware of any size. 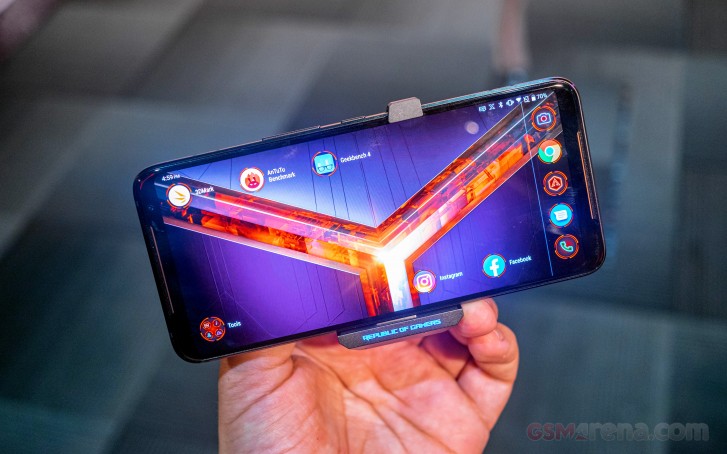 The experience of using it is nothing short of awesome and going back to a regular 60Hz phone is disappointing. There's a setting to bring down the refresh rate to 90Hz - and that looks and feels pretty great itself, until you switch to 120Hz which does indeed make a difference.

There's also a 60Hz mode and there are probably battery life gains to be made if you run the phone in 60Hz or 90Hz, as opposed to the full 120Hz - we did observe that on the OnePlus 7 Pro between its 90Hz and 60Hz modes. Again, it's the detailed review that will tell if that's indeed the case. 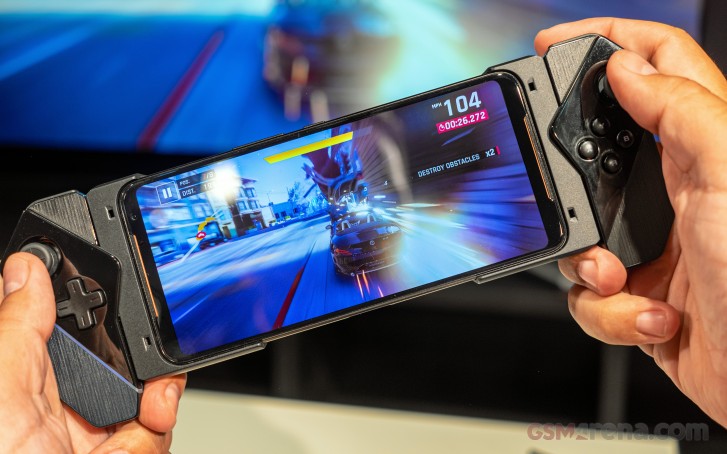 Now, there's the fact that few Android games support 120Hz, but Asus says there will be a perceivable difference in the experience even for regular titles capped at 60fps.

Another area Asus worked on was touch latency. The ROG PHone II has a 240Hz touch sampling rate, but they say this was not enough, so they've given the appropriate priority of the touch data in the kernel and they've optimized the Android framework to make the system react instantaneously to your touches. As a result the ROG II's touch latency is so low that it beats all the competition, which might result in pulling the trigger in PUBG an all-important millisecond faster, as they demoed on stage.

The OLED panel and the year that passed since the previous ROG Phone arrived allowed Asus to fit an under-display fingerprint sensor. In our (admittedly limited) experience it worked quite fast, check it out for yourselves.

The ROG Phone II comes with improved Air Triggers - the touch/press sensitive areas on the right side of the phone - or rather the top as they'll be used in landscape mode with the side-mount connector facing down. The AirTriggers now support swiping and they recognize not only taps but squeezing by the index fingers meaning you can rest your fingers on them and they will activate only when you apply force.

Asus admits the old implementation had a bit of a latency in the force feedback due to the the vibration motor not actuating fast enough. Well, it has brought the latency down to 20ms now. Additionally, the force feedback is now two-step - one for the press, and another for the release - so it imitates a real button.

Oh, and the ROG Phone II has not one but two vibration motors - one on each end of the phone. This allows supported games (like Asphalt 9, for example) to produce a left or right side vibration depending on which side of your car hits an obstacle.