The original ROG Phone had a whole ecosystem of optional add-ons and accessories and this follow-up is no different. Some of them are the same as last year, others have been re-engineered and made better. 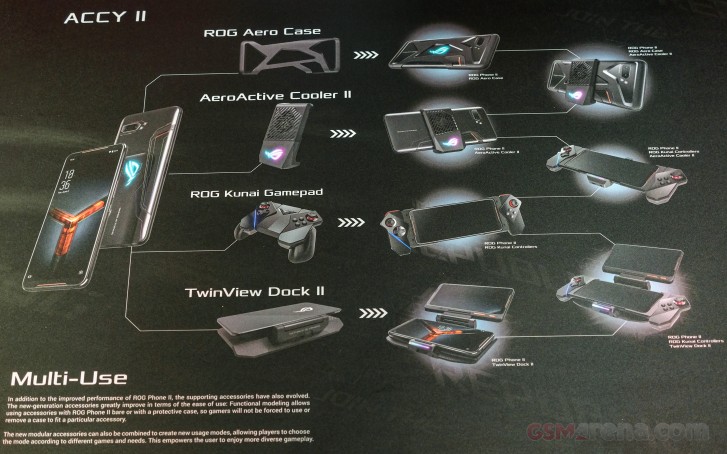 For marketing purposes and for sending out to reviewers, Asus has a dedicated carry-on-sized suitcase, itself pretty cool, to house all the accessories. Inside it we find the Kunai Gamepad, TwinView Dock II, Mobile Desktop Dock, Pro Dock, WiGig Display Dock Plus, plus a couple of case options, in addition to the phone itself. 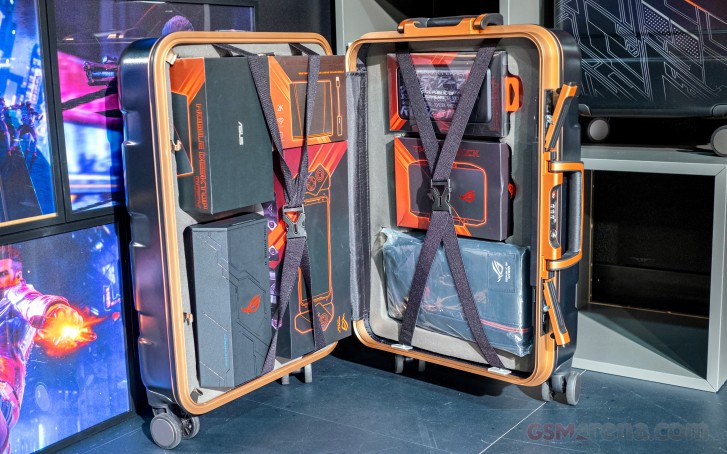 The Kunai Gamepad is the most important of these accessories as it's what turns the phone into sort of a portable gaming console. Asus has taken matters into its own hands as opposed to outsourcing the gamepad's production to GameVice and the end result is an awesome modular controller. 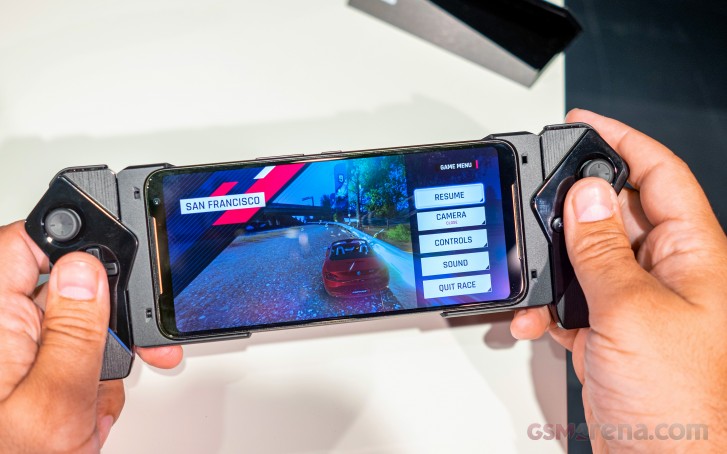 The Kunai Gamepad can be used in one of two ways - it's either a standalone controller or it splits into left and right halves and physically attaches to the phone - Nintendo Switch style. The second option is realized with the help a supplementary shell that snaps on the handset's back, and the controller pieces mount onto that. The Gamepad has a rather conventional layout with a D pad on the left, four buttons on the right, and an analog stick and two shoulder buttons on each piece. 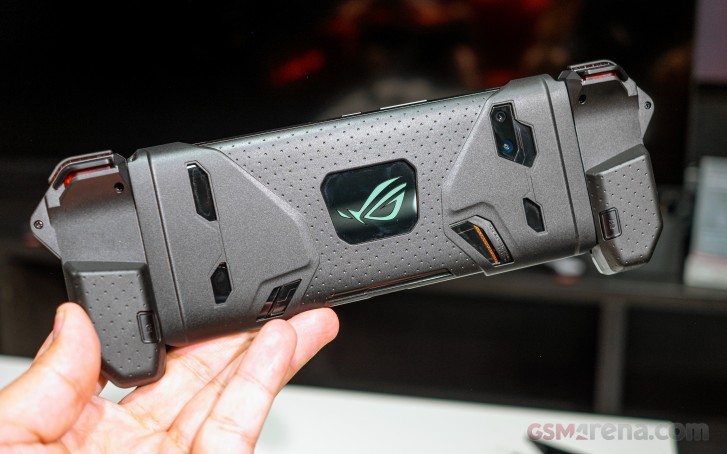 The TwinView Dock has been redesigned and gets a 'II' in the name itself, like the phone. In its essence, it's the same - a holder for the phone with an extra screen sticking out of it. Only now, the phone goes on the bottom while the dock's display is on top.

The Kunai Gamepad can be used with the TwinView Dock II as well - the dock is designed so that it will take the phone with the Gamapad's shell mounted on it. 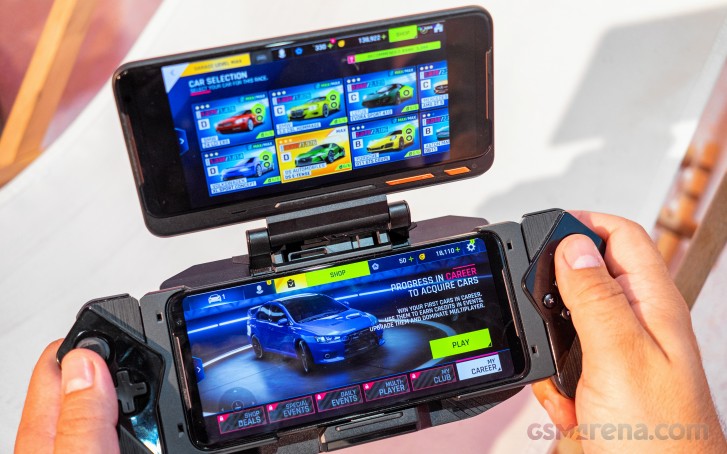 The Mobile Display Dock and the Pro Dock are unchanged from the previous generation and offer different degrees of connectivity for using the ROG Phone II in desktop scenarios or simply for hooking up to external displays. The WiGig Display Dock Plus is also familiar from last year's add-on roster and provides a usable, if not flawless, solution for wirelessly transferring to an external display. 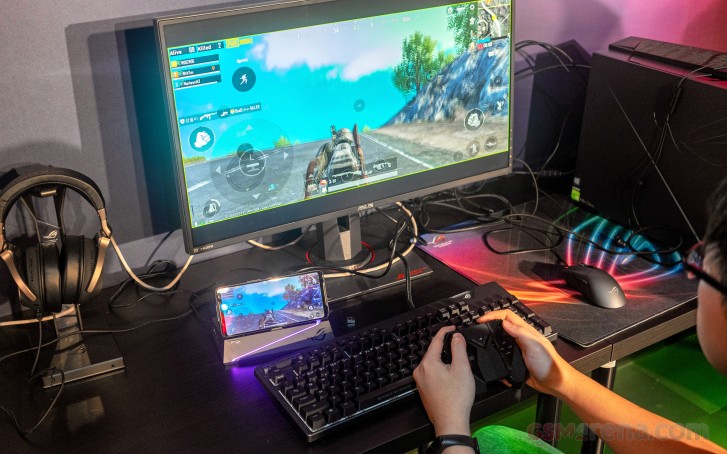 The case choices include the Aero Case which is more of an exoskeleton than an actual case, though it does cover the top and bottom of the phone and offers decent protection. It doesn't get in the way of using the AeroActive Cooler II, which is nice. This might come bundled with the phone in some markets.

The Lighting Armor Case covers the back fully so it offers better protection - plus there's 'armor' in its name after all. It has an NFC chip built in, so the phone recognizes it and switches your wallpaper to one that matches its own dark aesthetic.

The Asus ROG Phone II has us mildly excited and for a number of different reasons. On the one hand, it's a powerful Android gaming machine with a comprehensive accessory package. And on the other, it's a proper high-end smartphone with a full set of all-out specs that you can't find anywhere else. Plus, we just found out that gaming phones make a big difference and this one might just be the best gaming phone yet. 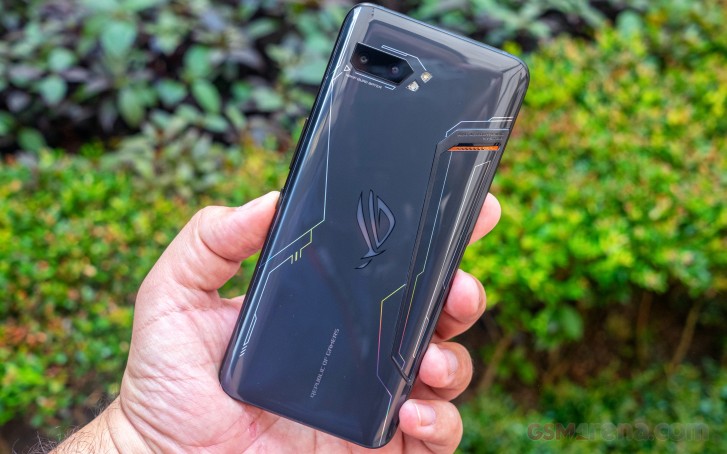 We only got to spend a few short hours with Asus' latest, and the above pages are all based on the early impressions we picked up in this limited time. We'll be sure to look into the ROG Phone II's performance in more detail once we get a proper review unit sometime down the line. Stay tuned.