Not what you’d expect

BlackBerry Curve 9380 comes with a standard set of accessories - a USB cable, a charger head and a set of headphones are provided. You get a complimentary 2GB MicroSD card as well.

The Curve 9380 is made entirely of plastic - the reason why it weighs just 98g. Despite the similarities with the Torch 9860 design, there is no metal on the panels this time around.

Most of the material used on the new Curve is black glossy plastic so there will be lots of fingerprints, smudges and unpleasant marks of whatever touches the phone. The only parts that are not glossy are the already mentioned chrome framing and some rubberized second frame for the side controls and the camera/flash combo.

Most of the front bezel is occupied by the 3.2" HVGA capacitive touchscreen with 188ppi pixel density. It's not among the best we've seen, but the display is actually quite good - vibrant colors and decent contrast, very good viewing angles and the sunlight legibility.

The one thing that we don’t like about the RIM's touchscreens is the lack of haptic feedback.

Under the display, there’s the typical BlackBerry navigation combo of Call keys, Menu and Back buttons. They're all big enough for comfortable use. Unfortunately, all four controls are part of one plastic plate and because of that - the inner two are really tough to press. Placed in the middle is the trackpad, which will get its share of use, especially in the system menus that aren't all that touch friendly.

The trackpad and the four controls

The earpiece and status LED are the things to note above the display, where the BlackBerry logo takes a prominent spot.

Earpiece and a status LED on top

On the left side of the Curve 9380 there's only a MicroUSB port used for charging and file transfers. Its central position is not the most comfortable but it looks neat.

The microUSB port is on the left

The volume keys are on the right side, with a very subtle mute button in between. It doubles as play/pause button in the music player. The convenience key near the bottom is set by default to serve the fixed-focus camera.

The volume control keys, placed either side the pause/mute button, and the camera button on the right

The lock button is placed at the top of the BlackBerry Curve 9380 but similar with some of the front controls, the Lock key is also pretty tough to press with no tactile feedback. The unprotected 3.5mm audio jack is also nearby.

The Lock key and the 3.5mm audio jack at the top

The bottom of the phone has the same glossy plastic finish as the top and only features the microphone pinhole.

The lonely microphone is at the bottom

The 5MP camera lens and the LED flash are at the back surrounded by rubberized plastic. The black glossy battery cover, although looking pretty, gets smudgy very fast and isn’t that nice to touch. A chrome plastic frame runs around the back and the side controls.

The loudspeaker grill is at the bottom.

Underneath the battery cover you'll see the 1250 mAh Li-Ion battery and the hot-swappable microSD card slot. The SIM compartment is under the battery.

Taking a peek under the hood: the microSD card slot and removing the battery

The battery of the Curve 9380 achieved a score of the average rate of 39 hours in our battery test. This means that if you use your device for an hour each of phone calls, web browsing, and video playback every day, you will have to recharge it every 39 hours. You can check out the full scoop on the Curve 9380 performance over at our blog. 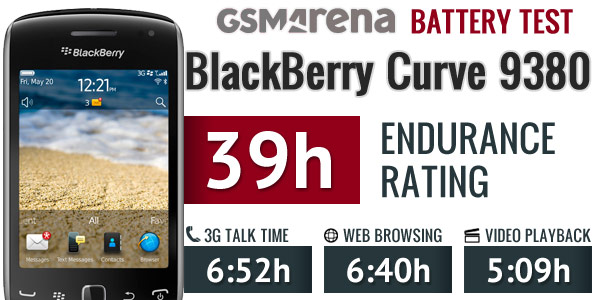 The BlackBerry Curve 9380 is a compact, pocket-friendly and easy to handle. There is nothing new or unique with its design, or the materials it is made of. But like most of the RIM smartphones, the Curve 9380 is excellently built without any wobbling or creaking. We are not impressed by its design, the new Curve is still a looker and if it wasn't for the glossy plastic, it might have been another beauty within the BlackBerry lineup. We guess that's not the point of the mid-rangers though.