Not what you’d expect

The Curve 9380 has a built-in accelerometer to automatically toggle portrait and landscape mode as you browse your picture collection.

New icons for the music player

Surely, RIM has refreshed the Music Player icons, but that’s basically all they did. It’s still pretty conservatively styled, but most of the functionality has been there since BlackBerry OS 5.

We admire the whole OS 7 lineup for its video-playing capabilities and the Curve 9380 is no exception.

The 3.2" screen is perhaps big enough for decent video consumption. The video player's interface might not be too impressive, but the functionality is mostly there.

The Curve 9380 video player promises to support DivX, XviD, H.264/MPEG-4 and WMV videos up to 720p resolution. It did manage to play all of the DivX files we threw at it, WMV, MOV and MP4 files up to 720p were no problem either, but the XviD ones didn’t go that easy. Some of the files were OK, while others where just incompatible. It seems it's either the bitrate or audio codec that were to blame, but whatever it is, we won't count on that XviD support much if we were you.

Here's a quick, but unfortunate advice for you - if you want a smartphone with good audio output stay clear of the BlackBerry Curve 9380.

The RIM smartphone did quite uninspiringly in the first part of our test - when connected to an active external amplifier. So if you are using it with your home stereo or car audio you will get decent noise levels, dynamic range and limited stereo crosstalk, but imperfect frequency response and above average intermodulation distortion.

But as soon as you plug in a pair of headphones in this one, things are really starting to look grim. Distortion levels go through the roof and so does stereo crosstalk. At the end, you are stuck with an output that's quite far of the source signal and that is unacceptable for a modern-day smartphone. 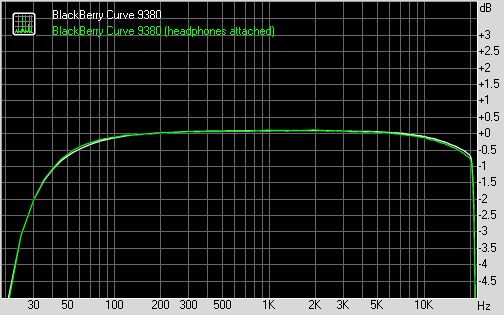