Now let's explore the rest of the BlackBerry Q5 controls. Above the screen, we find the traditional status LED, proximity sensor and the earpiece. The front facing camera on the Q5 is a 2MP unit that can do 720p video.

The right side of the BlackBerry Q5 features the volume controls, with a small pause/mute button squeezed in between. The convenience key, a token of the old days, is gone along with the trackpad and call buttons.

The three key combo on the right

The left side of the handset is where the two slots, for SIM and microSD cards, are located. Those are hidden under a small plastic flap which isn't really perfectly designed as it got stuck a couple of times under the back panel and we had to push hard against the back of the BlackBerry Q5 to release it. The other element of interest on the left is the microUSB port, which is left exposed.

The 3.5mm audio port and the power/lock key are at the top of the BlackBerry Q5, flanking the secondary microphone.

The power key, the secondary microphone and the audio jack sit on top

The bottom houses the loudspeaker grille and the mouthpiece. It's an unusual position for a speaker but one that makes sure you doesn't get muffled when the phone's resting on its back. Not sure about pockets though.

The primary microphone and the loudspeaker

The 5 megapixel camera lens and a LED flash are the main attraction at the back. We like the fact that all the mandatory labels such as the FCC ID are printed on a sticker than you can remove, so it doesn't spoil the looks of the back.

Unfortunately, the back panel of the BlackBerry Q5 is non-removable, meaning you don't get access to the 2,180 mAh battery.

The good news is the BlackBerry Q5 scored a very nice 55-hour endurance rating in our real-life battery test. The small screen and the energy-efficient chipset must be getting the credit for the solid performance. Find the complete breakdown here. 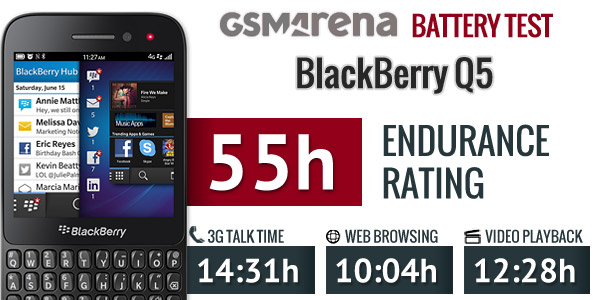 The BlackBerry Q5 uses a 3.1" IPS LCD screen of 720p resolution (720 x 720 pixels). The pixel density clocks in at 328 ppi, which is slightly higher than the Galaxy SIII's screen and about the same as the iPhone 4S/5's Retina display. This means everything on the screen is nicely sharp and you can easily make out very fine text in your documents or web browser. 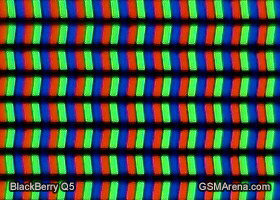 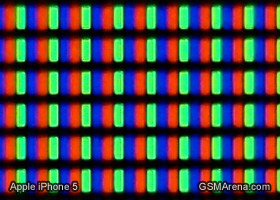 The transition from AMOLED to IPS LCD has cost the BlackBerry Q5 somewhat in terms of contrast, but colors are still pretty great and viewing angles are very decent, too.


Sunlight legibility is average, as testified by the BlackBerry Q5's performance in our dedicated test.