BlackBerry Z30 review: Against the odds

Now let's explore the BlackBerry Z30 controls. Above the screen, we find the earpiece flanked by the traditional status LED and the front facing camera. The latter has a 2MP sensor capable of 720p video recording. The hidden proximity and ambient light sensors are also around.

A peek above the Z30's display

As usual there is nothing below the display, not even a Home key. The Power key being dead center at the top would've involved quite a bit of a stretch of the finger, but luckily you don't need it to turn the screen on. A swipe up from the bottom of the screen will unlock the phone instead - and it will do it straight from sleep - no need to wake up forts and then unlock.

The right side of the BlackBerry Z30 has the volume keys, separated by the voice command button. The volume keys can be configured to double as music controls.

There're two pinholes below the volume keys, which may as well be for the extra couple of microphones the Blackberry Z30 is said to have. They just can't be the main mics to use in calls, though honestly we couldn't spot those anywhere.

The microUSB and microHDMI connectivity ports are on the left. There is no adapter in the retail package, you'll need to buy one if you want to use the TV-out functionality of the Z30. BB 10.2 has introduced USB host support though.

The left side of the BlackBerry Z30 has the connectivity ports

The top side of the Blackberry Z30 features the 3.5mm audio jack and the Power key. As we already said, you don't need the Power button to wake the phone up.

The top has the audio jack and the Power key

The bottom of the BlackBerry Z30 has no controls: you'll only spot a slit to place a fingernail and pull the battery cover open.

There is nothing on the bottom of the Z30

Flipping the device over, you'll spot the 8MP camera lens and single LED flash in the top left corner. The pair of stereo speakers, two grilles each, are placed at the top and bottom of the Z30's back.

A look at the BlackBerry Z30's back

The rear cover of the Z30 is removable, but unfortunately the battery is not user accessible, so DIY replacement is a no go. You can find the microSD and microSIM slots on the right and the memory card is hot-swappable. Popping a SIM card in will prompt a reboot of the device. 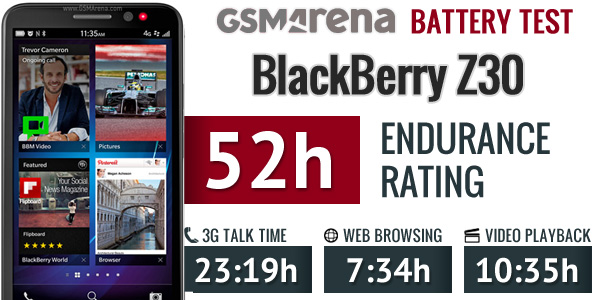 The Z30 boasts a 5.0" Super AMOLED screen of 720p resolution (720 x 1280 pixels). It's only the second AMOLED unit on a Blackberry phone, after the Q10 messenger. The pixel density clocks in at 294 ppi, which is way below what this season's flagships offer - but, admittedly, crisp enough for comfortable reading and viewing.

The 5" Super AMOLED 720p display on the BlackBerry Z30

Colors are punchy, blacks are the usual AMOLED deep and the screen is viewed comfortably at even wide angles.


Sunlight legibility is quite good too, as testified by the BlackBerry Z30's performance in our dedicated test.

The Super AMOLED display on the BlackBerry Z30 relies on a standard RGB matrix with the same pixel arrangement as the one Samsung used for the Galaxy Note II display. The pixels of the Z30 have one tall Blue sub-pixel on the left and smaller Green and Red pixels stacked one on top of the other. It's an odd arrangement, but it has three subpixels per pixel. The reason for the different Blue pixel size is that Blue AMOLEDs typically have a shorter life and making them bigger balances things out. Being bigger, the Blue pixel doesn't need to emit as much light to match the other two, which helps it last longer without affecting color balance.