Huawei's P20 roster is due to be officially unveiled on March 27 in Paris, but it's not like it's been shrouded in secrecy. The latest in a series of leaks we have today is of the P20 Lite version, in a color scheme we like to call 'life-altering blue' (we kinda like blue phones). 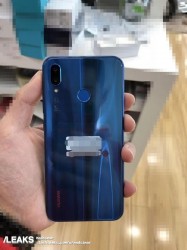 The lone live photo only shows the back of the phone, and it matches the look we're familiar with from previous leaks - first @evleaks showed a Shirley-named prototype, then came TENAA and press renders.

The Huawei P20 Lite is said to sport a notched (gasp) 5.84-inch 1080p+ display, and will be powered by the in-house Kirin 659 chip. Two cameras will be on the back, of course, but the second is just a 2MP one for depth sensing, so no Leica branding. That will run you €370 in Europe, though all of the above remains to be officially confirmed.

This is a slow phone, "cheaper" phone compared with the Honor 8 (95k antutu vs around 62k). Is more of a uglier, more expensive honor 9 lite

this one should be named as honor 8 episode 2

They REALLY need to get a better mid range SoC ASAP.