The Gionee Elife S5.5 comes in a lofty cardboard box packing a bigger than usual set of accessories. Our unit came wrapped in a gold flip case that doubles as a stand. The downside is the flip case gets attached using a strip of double-sided adhesive so it's not something that you would be putting on and off your phone that frequently. Also, the case will make your Gionee Elife S5.5 thicker.

The retail box contains a pretty much mandatory charger and a USB cable. You will also find an in-ear headset, a SIM ejection tool, a microUSB to USB adapter enabling USB OTG and USB Host, and four screen protectors - two for each glass-covered side of the Elife S5.5. The protectors even come with microfiber cloths.

Some research revealed the Gionee Elife S5.5's set of accessories varies across markets. There is a different, even bigger retail box, which omits the flip cover, but contains a transparent rubber bumper and extra charger plugs instead.

The Elife S5.5 stands at 145.1 x 70.2 x 5.5mm and weighs just 129g - incredibly light and thin for a 5" flagship, but seemingly taller for this screen size. The phone is built around a magnesium alloy frame with Gorilla Glass on both the front and rear.

The Gionee Elife S5.5 is one of the best looking phones we've handled in quite a while. The dual-glass design was pioneered by the iconic iPhone 4 and the Xperia Z lineup is another prime example. The Elife S5.5 is by no mean worse at that, even next to such dignitaries.

Sheets of Corning Gorilla Glass 3 cover the entire front and rear of the Gionee Elife S5.5. They are pressure-resistant but can eventually get scratched with prolonged use. That's why Gionee is supplying protectors in the retail box.

The Elife S5.5's frame is molded out of magnesium alloy, light and strong. The strong metallic frame and the thin Super AMOLED panel have helped Gionee claim the world's slimmest smartphone title for their Elife 5.5.

The iPhone 5s laid on the Elife S5.5 • the chamfered edges

The bold angular shape and the flat sides are the perfect match for a body this slim. Good thing the Gionee Elife S5.5 didn't try too hard to mirror the iPhone with its rounded corners. We feared a glass-covered device - and super slim at that - would be nearly impossible to hold securely. Of course, there are phones offering a better grip but the Elife is no worse than an Xperia Z.

The unibody has ruled out a removable battery, but it was probably their only choice aiming for a profile this slim. With a 5.0" screen, the Gionee Elife S5.5 is by no means a small device but the ultra-slim unibody feels refined and solid, yet surprisingly light. All bits fit perfectly together in a nearly seamless design and there are no cheap-looking accents whatsoever.

The Gionee Elife S5.5 feels amazing in the hand, especially considering its size. The white glass-clad back is nice but slippery - the extra slim body helps single-handed use in portrait but, regardless of the ample space above and below the screen, the landscape hold isn't as secure and comfortable. You risk covering the single rear loudspeaker too. Overall though, we think the handling issues are easy to live with in a phone which looks that good.

The Gionee Elife S5.5 has a 5" Super AMOLED screen of 1080p resolution and 441ppi. It uses the same panel as the Galaxy S4 - at least in terms of visual qualities. It's bright, with even backlighting, low reflectivity and great contrast.

Another underlying similarity is the PenTile matrix with a diamond arrangement. The diamond layout will make sure there are no visible artifacts and, with pixel density north of 400ppi, you can't take away points for sharpness either. 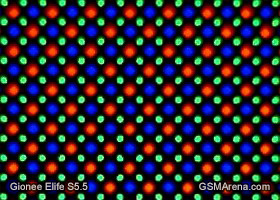 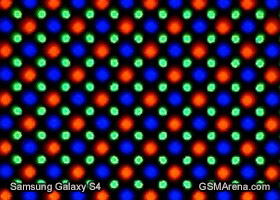 The color rendering is great with punchy colors typical of AMOLED screens. There are no dedicated color saturation modes though as on the Galaxy flagships.


Since it's a Super AMOLED display, the stellar contrast should hardly surprise. The sunlight legibility is great too helped by the non-reflective screen.