This is the most beautiful design to ever come from Honor. We've seen the manufacturer make other phones with hyper-reflective back glass on the Honor 8, 9 and 10, and more recently on the mid-range Honor 8X with a dual-finish backing. 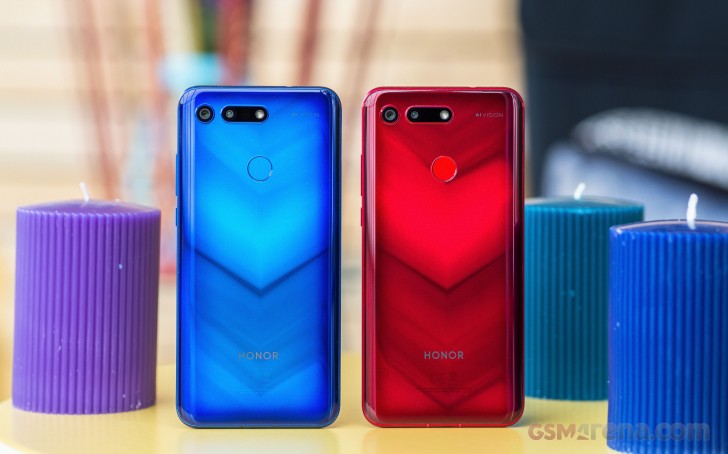 While we really liked the shiny-ness and glam factor of the aforementioned Honor phones, this is the first time Honor has taken the ultra-reflective glass to a completely new direction - two in fact. The reflections are arranged in a chevron pattern across the back of the phone. The V-shape of the reflective pattern is very fitting for Honor's "View" branding. 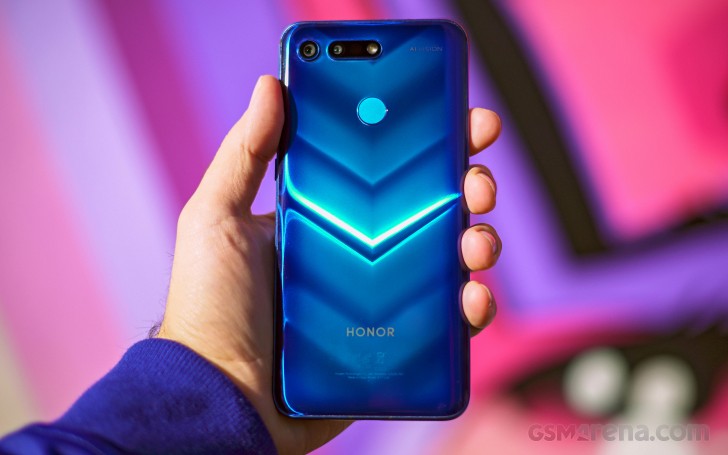 We received the Phantom Blue and Phantom Red Moschino Editions of the phone, which have 8GB of RAM and 256GB of internal storage. Also, the gradient is slightly more prominent and the edges around the back glass stand out more. You also get free Moschino wallpapers with those two. You can see the difference between the regular Blue and Red colors compared to the Moschino Editions. It's pretty subtle, to be honest. 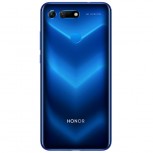 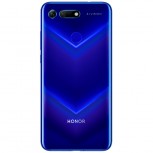 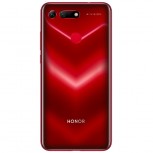 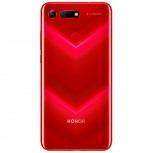 The long edges of the glass curve towards the frame, much like Samsung has been doing on the Samsung Galaxy phones for years now. This approach accentuates the phone's length over its width. This kind of fit-and-finish and design requires very strict tolerances, which we're glad to see has made it to the upper-mid-range category. 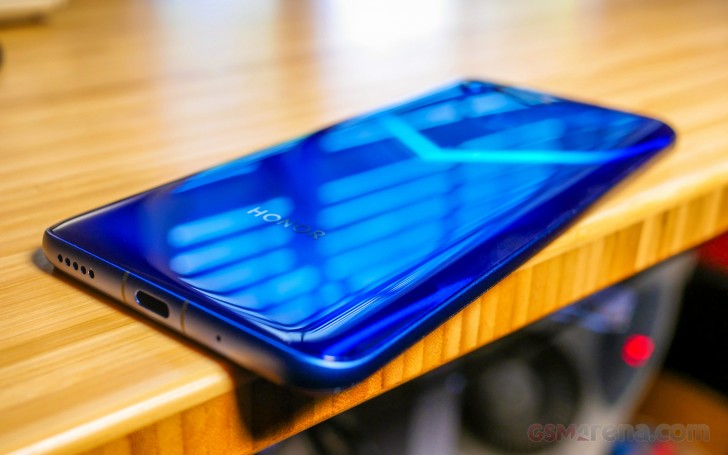 Honor has exchanged its youthful and understated insignia to a bolder version with all capital letters and a bolder appearance. The Honor brand is growing in popularity so we like the direction of this new insignia redesign. This new branding is placed under the surface layer of glass so it won't ever rub off. 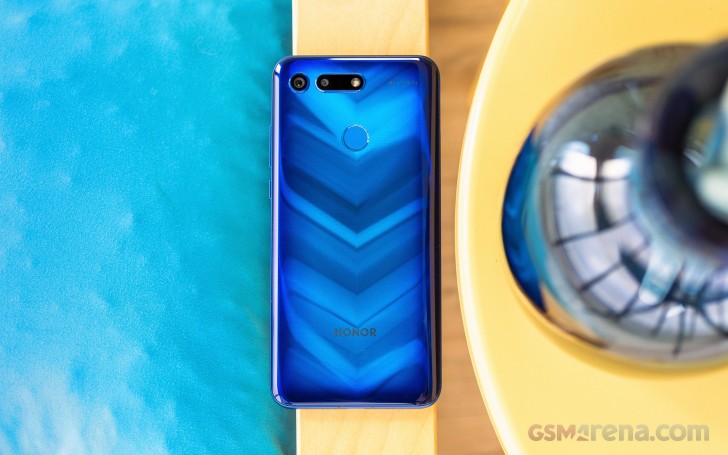 Also on the rear is the phone's dual-camera setup and a rear-mounted fingerprint scanner. The words "AI Vision" adorn the negative space to the right of the camera, and refers to the AI abilities that are possible thanks to the NPU in the Kirin 980 CPU. 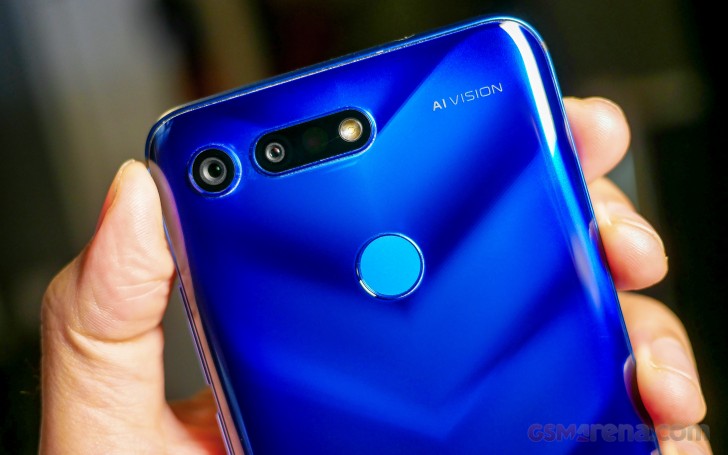 Now that we've Ooh'd and Ahh'd at the shiny back, let's take a look around the rest of the smartphone.

The View 20 is among the very first commercially available smartphones that have placed the front-facing camera directly behind the display, leaving a cutout of the panel for the sensor to see through the glass. We find this approach is much less obtrusive than a proper notch. The in-call speaker is right at the edge of the display's glass and Honor even managed to put the proximity and ambient light sensors in the tiny sliver of a top bezel - very impressive. 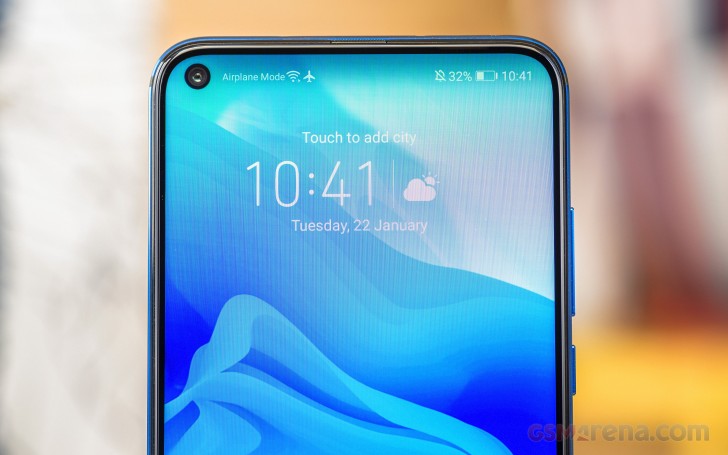 The display is also quite large at 6.4-inches, which puts it in the same category as the OnePlus 6T. From the front, the phone is all-screen. The left side houses the dual nanoSIM tray. There is no expandable SD card slot and the View 20 doesn't support the new Nano Memory format that Huawei introduced with the Mate 20 Pro. On the other side of the phone are three physical buttons: the power key, volume (+) and volume (-). These keys have excellent travel and are sturdy enough to avoid accidental pressing. 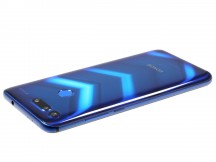 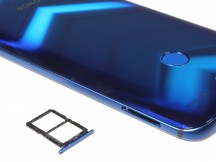 Honor View 20 from the side

At the top of the phone is a 3.5mm headphone jack, and IR blaster, and a noise-cancelling mic. The bottom has a USB-C port, downward-firing loudspeaker, and in-call microphone. 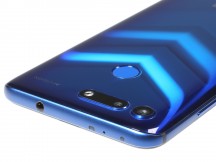 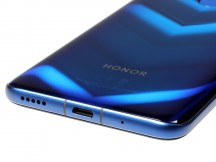 Honor View 20 from the top and bottom

The frame goes all the way around the phone and thins out a little bit along the tall edge of the phone to accommodate the dual curves on the rear glass. The anodized finish on the frame is cool to the touch and the 'phantom blue' paint job pops much more than the View 10's darker shade of blue. 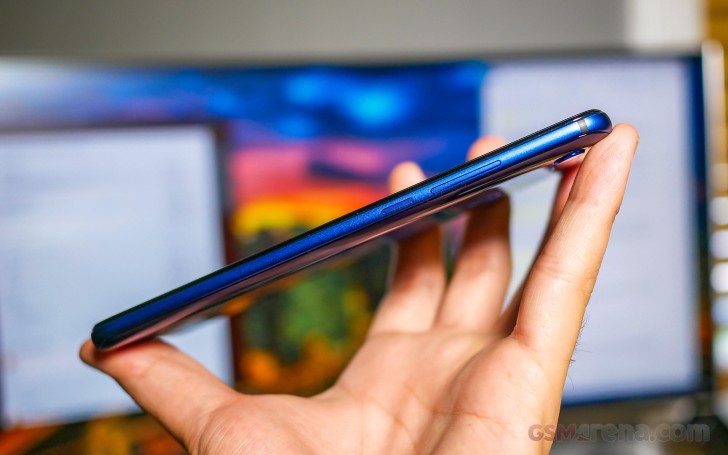 For now, only the standard red color won't make it outside of China so international buyers will have to choose between the Midnight Black, Sapphire Blue and Phantom Red/Blue Moschino Editions.