The image gallery does multi-touch

The HD mini offers a nice thumbnail browser straight in the Photos & Videos tab on the Home screen – and we already saw it in the UI chapter. It’s the best way to quickly preview all the images on the phone, both preloaded and captured by you.

The Photos & Video tab: an image and a video on display

To get to the actual gallery, you need to either hit Albums in the Photos & Videos tab, or launch it from the Programs menu.

The image is opened automatically in landscape mode and there is no option to rotate it to portrait view. Once the image is opened, you can zoom in or out using the pinch gesture or the double tab, or skip back and forth by finger sweeps.

Zooming and panning is blazing fast – the HD mini keeps up with the HD2 (of course, it only needs to refresh fewer screen pixels). But it won’t choke on even full-res 5MP images from the camera.

Just like recent HTC PocketPCs, the HD mini has a good music player that makes excellent use of Album art. The music player is accessible straight on the Sense home screen with a cool Apple-like Cover Flow animation.

The attractive music player runs directly on the home screen

The controls on the homescreen let you scrub through the song, go to the previous/next track and toggle shuffle and repeat modes. The landscape mode from the HD2 is not present though.

If a track does not have album art, the music player has the option to automatically find one using Gracenote. You can have it search for just the current song, the songs in the Now playing list or all songs.

In case you want to filter tracks by other than album, the Library shortcut will take you to the player backend where you can sort music by artist, genre, composer, purchased tracks or simply create custom playlists. The visual interface of the library is fluid and eerily reminiscent of iPhone's very own music player.

Thanks to the 3.5 mm audio jack you can plug your favorite headset in and worry not about the bundled headphones.

The FM radio does the job perfectly

The HTC HD mini built-in FM radio naturally requires the headset to be plugged-in. It has an excellent interface much like the rest of the multimedia players on board and offers memory for some 20 radio stations.

The FM Radio on the HD2

RDS is available too and there is a sleep function, which can turn off the radio automatically after 30, 60 or 90 minutes. So overall, radio is handled pretty well on the HD mini.

The HTC HD mini is among the louder handsets we have tested recently but fortunately that does not come at the price of increased distortions. On the contrary, the audio output of the WinMo handset is very good overall, with no major weaknesses.

The frequency response of the handset keeps within the +-1 dB limit with ease for the whole range and the noise levels are excellent. The same holds true for the dynamic range and the stereo crosstalk of the HD mini.

Check out the HD mini performance for yourselves. 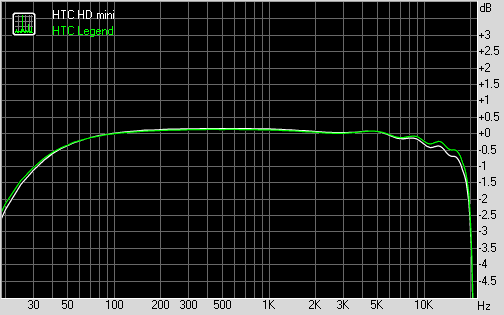 The HD mini comes with the standard - and sadly underperforming - Windows Media Player. It only manages mp4 and 3gp and for DivX/XviD support you will need a third party application.

Watching videos on the HD mini is enjoyable but videos will either have to be cropped or watched in a letterbox format – and of course converted to a format that WMP can handle.

Playing video on the HD mini

HTC have also added their own video player but it only supports the video/audio codecs available to the Windows Media player in the first place. To enjoy a wider range of video options on the HD mini (DivX or XviD for example), you will probably need to purchase a dedicated video player with additional codec support.

We made out traditional Core Player benchmarks with the HTC HD2 along and compared them with the HD mini. It managed to play D1 video without a hitch - all you have to do is keep the bitrate of the videos under 3Mbps and you'll be OK. The HVGA aspect of the screen is not ideal for movies though - 16:9 content will wither have to be cropped or watched in a letterbox format (and movies can be even wider).