HTC One Google Play Edition review: One for Google

The HTC One Google Play Edition ships in the same retail box as its Sense-d relative. The only difference is that the image on the box now shows the smartphone running stock Android.

Alongside the device in the box you will find a charger, a USB cable, a headset, as well as a tool for removing the SIM card. A few leaflets and a couple of HTC stickers are also present.

There are absolutely no surprises in the design department of the HTC One Google Play Edition - it is exactly the same as the internationally available version. With this in mind, we must point out that, five months after going official, the HTC One is probably still the best looking smartphone to break cover this far in 2013.

Build quality is unsurprisingly flawless. This side of a Vertu device, one will be hard pressed to find a better built smartphone out there. HTC has indeed set the bar high for the entire industry with the One's aluminum unibody.

The HTC One has a brilliant 4.7" Super LCD3 screen, not a 5-incher, which is becoming the flagship standard. The One's screen is 12% smaller than the 5" models, but boasts a pixel density of 469ppi, up from 441ppi.

The difference between the 469ppi of the HTC One and the other 1080p screen out there (even the 401ppi LG Optimus G Pro) isn't the kind that can be easily seen. Anyway, we assume HTC were driven by a screen size they considered most usable, rather than trying to top some pointless pixel density charts.

HTC has been putting out some excellent screens recently and the One's display is just another example of this. The contrast is impressive and the viewing angles are extremely wide - there's no shift in colors and only a slight contrast loss at extreme angles.

The screen is laminated too, for a maximum close fit between individual layers, bringing the image as close as possible to the surface of the glass.

The face of the One is split into three - the massive middle section is the Gorilla Glass 2 covered screen, with strips of aluminum on both sides. The latter house the stereo speakers with BoomSound tech.

A strip of glass right below the screen keeps the two capacitive keys, Back and Home. Above the screen is the front-facing camera, plus the ambient light and proximity sensors. The top speaker acts as an earpiece during calls.

The microUSB port and the mouthpiece are at the bottom. There's a noise cancelling mic at the back of the phone. Besides its usual noise cancellation duties, the second mic keeps track of how loud the ambient noise is and the phone will boost the sound from the mouthpiece to make sure the other side hears you loud and clear.

A look at the bottom of the handset

The top of the phone features the 3.5mm audio jack and the Power/Lock key. Unfortunately, the IR port is not functional in the HTC One Google Play Edition - stock Android is yet to support it.

The top of the HTC One

The back of the smartphone is a big slab of aluminum that's split into three parts by fine plastic lines - to match the division of the front into screen and speakers. The camera and its LED flash are located at the top of the One's back. A noise-cancelling microphone is keeping them company.

The view on the back of the HTC One

Packing the same 2300mAh battery as its regular sibling, the HTC One Google Play Edition made us curious to find out about the effect of stock Android to its battery performance. With an endurance rating of 55h, the Nexus-experience HTC One actually surpassed the achievement of its "civilian" sibling. 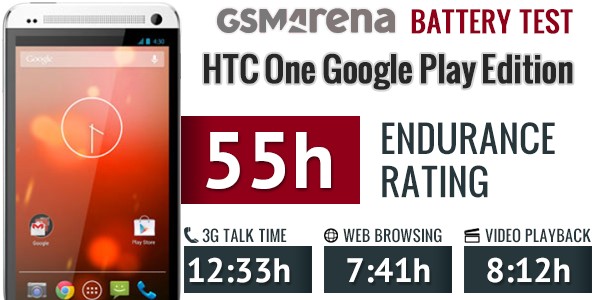 The Google Play Edition HTC One posted slightly lower results in telephony, web browsing, and video playback than its Sense, but more than made up for them in the standby department. The stock Android version had a clear advantage over the Sense-d one when the device was not into play.

Quite expectedly, handling the cold metal body of the HTC One is a pleasure. We would however, urge you to pick up a protective cover of some sort for the device - the aluminum is not going to handle serious drops well.

Handling the HTC One feels amazing

Following next, is a closer look at the centerpiece of the HTC One Google Play Edition - its untouched Android OS.