The HTC U Ultra is among the bigger HTC phones out there as the company has had little participation in the 5.5+ inch field recently. The Ultra screen stands at 5.7" big, plus an additional row for the secondary screen. 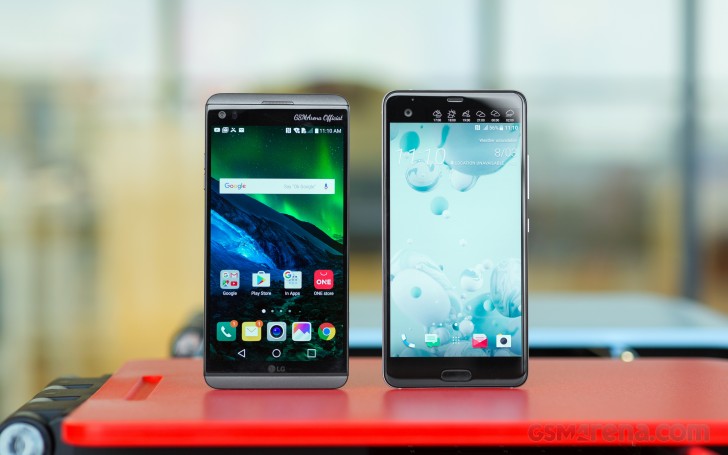 The phone is about the size of the LG V20, which has a very similar screen setup. However, LG has managed to fit a slightly bigger removable battery in the V20, while the HTC U Ultra comes with a 3,000mAh sealed battery.

Now that all-metal phones are fairly commonplace, HTC has shifted to a glass back with a "liquid surface." The effect is similar to a soap bubble - mostly transparent, but as the surface curves away a rainbow of colors appears.

Our HTC U Ultra unit is Ice White and before we go on we should note that it's very difficult to photograph - to the naked eye the phone appears white most of the time (and it's green in the photos). Only when the light hits it at a certain angle can you see the green and pink hues that hide within the glass.

It's a subtle but cool effect. The other three color options similarly combine several hues. The prismatic nature of the glass also makes fingerprints harder to spot. 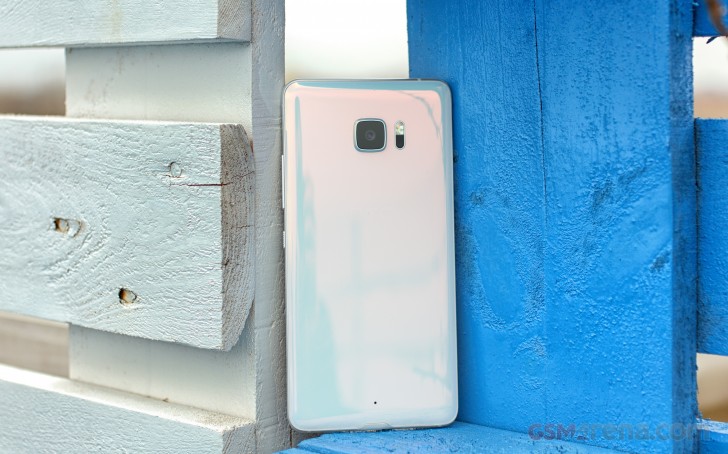 Here you can see the phone's retail packaging. Like most other HTC packaging, this one is laid-out in a flat-style box. Upon lifting the package's lid, we are greeted by the phone itself. Putting the top flap and U Ultra aside, the box included the standard documentation, a cleaning cloth, clear plastic case, SIM tool, Quick Charger + USB-A to USB-C cable + HTC's USB-C earbuds with extra tips.

The plastic case wouldn't really protect the phone from really rough drops. Rather, this is more like a case you can use until you purchase another one. Otherwise (depending on how clumsy you are), it does a decent job of protecting the backside from micro-scratching and fingerprints while the corners are also protected from scuffing. 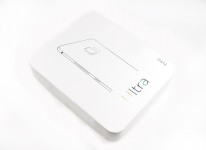 The outer shell of the phone consists of two panes of glass fixed to a metal frame. On the 64GB version, the front is Gorilla Glass 5, while the back glass is of unknown origin but similarly scratch resistant. There is a special 128GB version which will swap the front GG5 for more durable Sapphire instead. This model will launch at a later date and will be even more expensive.

The back has a subtle curve, not enough to affect ergonomics but the change in angle is enough to bring out the colors in the glass.

The light show on the back shouldn't distract you from the two stars in this production - the 12MP camera on the back and the secondary screen on the front. They are what makes the U Ultra special and worth the extra cash over the HTC 10 evo.

And so we'll give them special attention later, for now let's focus on the rest of the phone. 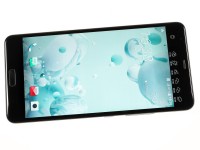 The secondary screen, the better camera and "liquid surface" put the U Ultra ahead of the 10 evo

The HTC U Ultra is among the larger phones out there - no other way it could be, given its 5.7" main screen and secondary screen above that. And while it is not part of the current "mini-bezel" trend, the bezels are fairly slim.

The bottom bezel features capacitive buttons with Home doubling as a fingerprint reader. It is fast and accurate, but we think it is a tad too thin, which means you have to be more precise about putting your finger on it.

The top bezel has to house the secondary screen, of course, and there is also the 16MP selfie camera that has snuggled up next to it. The notification LED is right next to it. Above that screen are the sensors and the earpiece, which doubles as the second loudspeaker on the phone. 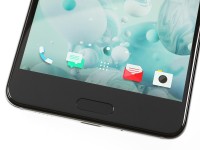 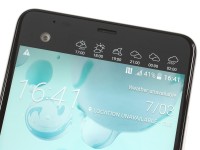 We'll cover it in more detail later, but the U Ultra has one loudspeaker on the front (the earpiece) and one on the bottom. How they work depends on what mode they are in - they can provide pleasing stereo sound for music or crank up the surround sound for movies.

The USB-C port is also here and it is the only wired audio output - there's no headphone jack here. This enabled HTC to make USonic, a feature that uses additional hardware in its headphones to scan your ears and tune the audio based on that. You could use other USB-C headphones (or get an adapter for regular wired headsets), but you will lose that feature. 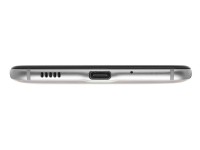 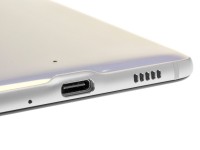 Another point of interest here is one of four microphones. The HTC U Ultra uses this set of mics to record "360° audio", which provides an immersive experience (it shows that HTC is a fan of VR). Alternatively, you can record High-Res audio (but not both).

360° audio is a feature of the camera, the sound recorder seems to lack such an option (but it can record High-Res FLAC). 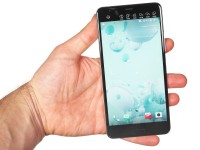 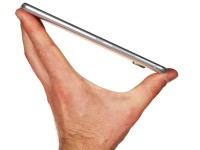 The camera itself comes from the HTC 10. It features a large 12MP sensor with large pixels - 1/2.3" and 1.55µm respectively. A bright f/1.8 aperture and optical image stabilization (OIS) further improve the phone's performance in low light. There's a dual-tone LED flash to help out as well. To ensure fast and accurate focus, the camera comes loaded with Laser and Phase detection autofocus.

The camera does protrude from the back, but even the 64GB model has a Sapphire lens cover to protect it from scratches. 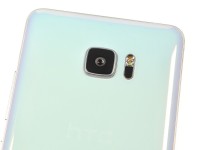 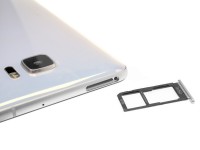 Topside we find yet another mic (the other two are on the front and on the back) and the card slot. This is a dual card tray as the U Ultra is available only in dual-SIM flavor. We think that's a smart move by HTC - it's a hybrid slot so most people will use it as a single-SIM device, while those who need dual-SIM will not have to seek out a separate version. 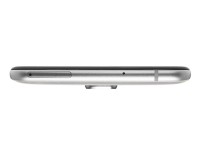 There's the downside that you can put in either a second SIM card or a microSD card but not both. Still, with 64GB storage as base (48GB of which is available to the user) and with a 128GB option on the way, we don't think it's much of an issue.

The final items of interest on the exterior are the buttons on the right side - the Volume rocker and the Power button. Both are fairly large and have a satisfying click, we especially appreciate the texture on the power button that makes it easy to find by touch. 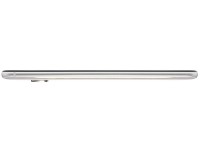 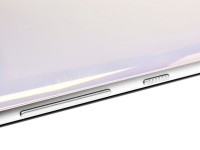 As we said before, the HTC U Ultra is larger than your average Android. Not an issue for phablet fans but it is something to consider if you're looking at your HTC 10 and wondering if you should upgrade. It really has been a while since HTC went beyond 5.5". 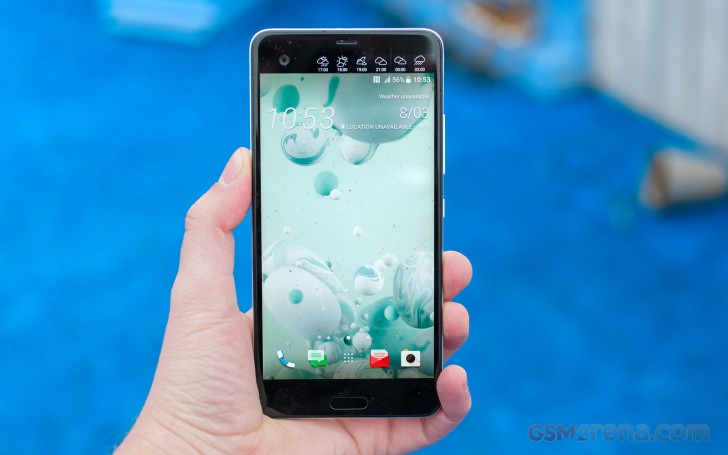 Still, the subtle curve of the back is enough to give you a good hold on this 170g phone. Still, glass can be quite slippery (even clammy palms can make a huge difference). Not that metal is any grippier, basically all modern high-enders go for looks rather than grip.

At least the shifting colors of the glass back conceal fingerprints and make for an interesting talking point - few phones ever put on a such light show and exclusivity goes hand in hand with a premium feeling.

The smudge-resistant properties of the back are only valid for the white version as far as we can tell, the other colors are quite bad in this respect.