The earpiece is located above the display. It is joined by the ambient light and proximity sensors, as well as the front-facing 5MP snapper. There is absolutely nothing under the display.

The power/lock key and the volume rocker are located on the right side of the device. There is nothing on the left side.

A look at the sides of the phone

A 3.5mm audio jack and a microphone pinhole can be found on the top. The mouthpiece and the microUSB port sit on the bottom.

The top and bottom of the Ascend Mate2 4G

The back of the Huawei Ascend Mate2 4G is home to the 13MP Sony BSI camera, its single LED flash, a small latch to remove the thin cover, as well as the 1W speaker. A subtle Huawei logo keeps them company.

The back of the handset

Removing the thin back cover of the device reveals the micro-SIM card slot and the microSD card slot. Both can be hot-swapped. The handset's battery is sealed and not removable.

A peak under the back cover

We had high expectations toward the battery performance of the Huawei Ascend Mate2 4G and the handset delivered. The 3,900mAh battery unit of the device propelled it to the impressive endurance rating of 106 hours. This means that the Huawei Ascend Mate2 4G will make it through well over four days of usage if you go for an hour each of telephony, web browsing, and video playback daily. 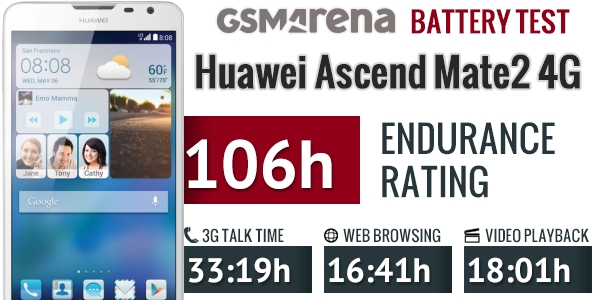 The above endurance rating makes Huawei's phablet the longest lasting Android device we've tested to date. It barely lost to the Nokia Lumia 1520 in the battle for the overall crown, though it handily beat the Microsoft royalty in all disciplines, but the standby power consumption.

You can also use the phablet's battery to jumpstart and charge dead phones via a dedicated cable. The feature is quite neat and useful, not to mention it would give you a constant supply of tease rights against your friends with less enduring devices.

You can find out all about the battery performance of the Huawei Ascend Mate2 4G in our dedicated post.

Huawei Ascend Mate2 4G comes with quad-band 2G/GPRS/EDGE, penta-band 3G with HSDPA and HSUPA (up to 42Mbps downlink and 5.7Mbps uplink), as well as penta-band Category 4 LTE support (50 Mbps uploads and 150 Mbps downloads). You can use the device virtually anywhere in the world. It also works on both AT&T and T-Mobile in the United States, as well as on the smaller virtual carriers which use their networks.

Local connectivity is covered by dual-band Wi-Fi a/b/g/n with DLNA, so you can easily play media (photos, videos, music) from DLNA-enabled storage devices or push content from your phone to a DLNA TV or music player.

Bluetooth 4.0 is also on board with A2DP, EDR, and LE. The microUSB 2.0 port supports USB host so you can attach USB flash drives or connect mice/keyboards.

GPS and GLONASS support is present. There's FM radio on board too.

The only major connectivity feature which is oddly missing is NFC.