Huawei Ascend Mate2 4G comes with a highly-capable image gallery. As there is no dedicated video player, it's also used to play videos. It defaults to the standard Album view, where you see all of your media divided by albums. Video files are signified by a special icon.

There's a capable image editor on board

The Huawei Ascend Mate2 4G doesn't have much of a video player - you just open videos from the gallery and that's that. On the up side, it handled most videos we threw at it - all the way up to 1080p, DivX, XviD, MKV and even WMV.

Subtitles are supported, you just need to name the subtitle file the same as the video.

The 6.1 HD display is perfect for watching movies on the go. In case you need more functionality, you can also download a third-party movie player.

The device comes with an app called Music that is an updated version of the stock music player. It has a well-laid out, easy to navigate interface

The Now playing interface features more eye-candy including album art. You can swipe to skip tracks or tap on one of the floating album covers to bring out a list of all songs in that album.

Curiously, the music player does not feature an equalizer. It only has a DTS on/off button.

Huawei Ascend Mate2 4G has a built-in FM receiver. It can play through the headset or the loudspeaker, but you'll need to have the headset plugged in as it serves as an antenna. We were disappointed not to find RDS - radio stations need to be named by hand.

Audio output is great, for the most part

The Huawei Ascend Mate2 4G audio output is quite impressive when used with an active external amplifier. The phablet aced the first part of our test, posting perfect scores top to bottom with very high volume levels to boot.

The volume is every bit as high even when you plug in a pair of headphones, but the output degrades a bit. Quite a lot of harmonic distortion creeps in, while the stereo crosstalk raises significantly. It's a very decent performance overall, but not quite as great as in the first test. 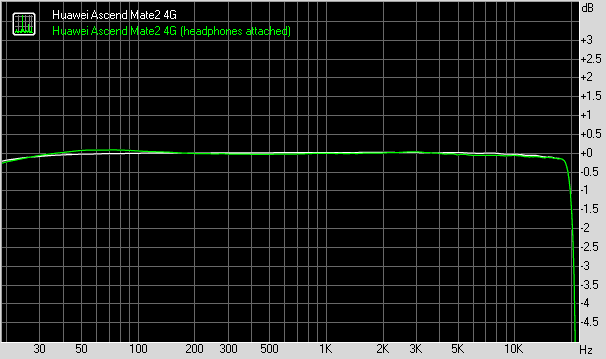