Both the LG Optimus LG for AT&T and Sprint feature a 4.7" True HD-IPS+ LCD screen of 768 x 1280 resolution and 470 nits of brightness. They employ the so-called borderless design, which is another way of saying there only the bare minimum of bezel. There's just enough to let you comfortably hold the phone without worrying that your palm of fingers will touch the screen.

The display of the LG Optimus G

LG uses a screen technology called Zerogap touch - it basically means the all the screen layers are laminated together to prevent glare and the in-cell touch layer is actually inside the LCD. The top layer is Gorilla glass for protection.

We put the LG Optimus G through our usual display tests and here's how it scored. You can find more about the testing procedures here.


Sadly, the LG Optimus G screen is quite reflective, which leads to a rather mediocre performance in strong sunlight.

We snapped a shot of the display under a microscope and here's what the RGB matrix of the Optimus G looks like. 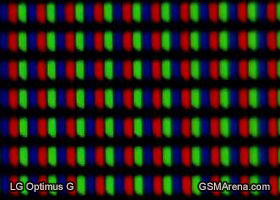 The viewing angles are good thanks to the IPS+ tech, but not without some color shift and contrast loss.

The LG Optimus G is about the same size as the other Android flagships but does well to set itself apart with its bold and assertive styling. It may not have as good handling as the Galaxy S III, but it comes close in feeling comfortable in the hand. The build quality is rock solid.

The magnificent screen up front and the excellent handling for a device this size, make the Optimus G a pleasure to use. It may come a few points short of a perfect score for looks, but it still feels like a proper flagship - now let's see if it behaves like one.

Both versions of the device are easy to handle