The retail box covers just the basics, but that's what everyone else is doing these days. You get an A/C adapter, a microUSB cable for charging and data connections, and a single-piece headset in matching white color. Our test unit didn't have any NFC tags, which are otherwise supplied with most LG smartphones of late, but this could be a region-specific feature.

The Optimus L9 has the same screen diagonal and the same angular styling as the Optimus G and the Optimus 4X HD. The three handsets are near identical in size, the L9 being just a tad thicker - but nothing to make an unpleasant difference. At 131.9 x 68.2 x 9.1 mm, the L9 is still nicely pocketable and it's also the lightest of the three at 125 g.

By some weird coincidence, we had the white version of all three phones for review and that helped us spot an important difference. The LG Optimus L9 and the 4X HD have white screen bezel that matches the handset's paintjob, while the Optimus G's bezel is always black, whatever color version you choose.

For one, the tacky leather-like texture at the rear is gone and the L9 uses a simpler, more sensible pattern. We tend to prefer hardware Home keys and the L9 obliges, as opposed to the 4X HD, which goes for capacitive only.

The Optimus L9 is made entirely of plastic and the global version (as opposed to the T-Mobile-exclusive model) we have here is available only in white. The double silver frame running all along the sides of the handsets is borrowed straight from the Optimus 4X HD. All ports and controls are squeezed in the tight space between the frames, which has the same textured pattern as the battery cover. The phone offers quite a secure grip actually.

The front is almost completely occupied by the 4.7-inch qHD display. Above it we find the earpiece, the proximity sensor and the small VGA camera for video chats.

Just below the screen are the capacitive Back and Menu keys surrounding the hardware Home button. The backlighting of the touch keys is configurable in the settings and you can have it always on/off or choose between several auto-turn-off intervals.

The left side of the Optimus L9 has the volume rocker, though there is more to it than meets the eye. It actually packs three keys - volume up, volume down and a small middle key for instantaneous access to the Quick Memo app, which we'll talk about later on in the review.

The left side of the Optimus L9

The left side has the single Power/Lock key.

The Power/Lock key combo on the right

The Optimus L9's top is where the 3.5mm audio jack and the secondary microphone are. The second mic is used for both noise cancellation during calls and for stereo audio during video recording.

The top has the 3.5mm audio jack and the secondary mic

The microUSB port and the primary microphone are at the bottom.

The connectivity port and the primary mic at the bottom

The back features the 5 MP camera lens along with a single LED flash and a loudspeaker grille at the bottom.

Although the phone will warn against, it can be tricked to change SIM cards without restart. If you turn airplane mode on and swap the SIM, you'll be good to go as soon as airplane mode is turned back off.

The microSD card is not hot-swappable

The NFC antenna is on the battery cover itself.

We were preparing to be impressed by the LG Optimus L9's battery life. It is powered by the same 2150 mAh unit as the 4X HD and has fewer pixels to worry about, and only two processor cores. The L9 did get a respectable rating of 42h, which however isn't all that much compared to the 40h score of the 4X HD. Obviously, the power-saving core of the Tegra 3 chipset is making up for much of the difference in power consumption. 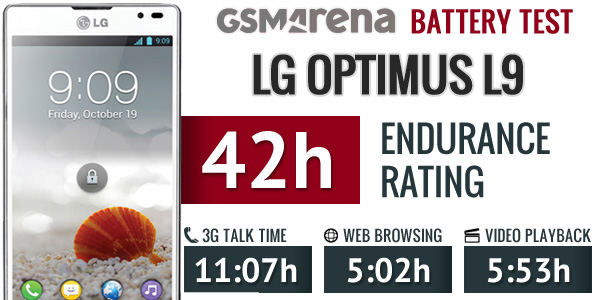