The Meizu m1 metal comes in a rather compact paper box, which covers the basics - you get a USB cable, a 2A charger plug and a SIM ejection tool. While there are no headphones bundled in this version, we find the contents enough for a budget smartphone.

Meizu m1 metal, as the name suggests, is made of metal but it's not the same kind of alloy used on the MX5 and Pro 5. The m1 metal uses a traditional aluminum alloy, which has been die-casted with the so-called crystal metal - it's an alloy with traces of rare earth elements such as titanium and cobalt. 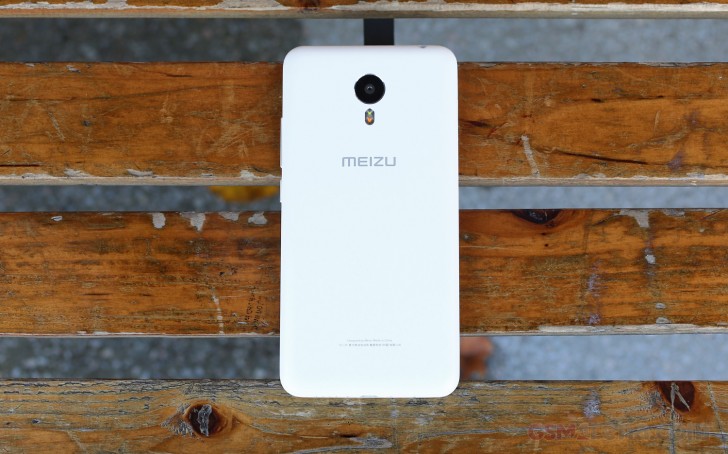 On paper this sounds great but in reality it isn't what you'd expect. The entire rear feels and looks more like a big piece of matte plastic with a glimmery paintjob with a pearl-like finish rather than anything close to metal. You can easily spot the polished chamfered edges around the front glass, which suggest a metal piece but that's it.

The good news, while it may not feel like metal, it does look like it and it's enough to give any piece of plastic a run for its money, which was the whole point of this exercise.

The pearl-like finish on the back shell shines in a slightly different hue under different light, which is a real looks booster.

We don't know if this material was cheap or not, but no matter it doesn't feel much like metal, it does fulfill its purpose of a premium build and high-end looks.

The lack of antenna strips around the back, as it was the case with previous metal Meizus (MX5, Pro 5), suggests the alloy doesn't obstruct the Wi-Fi/cellular signal. We tried to determine if it was weaker than, say Pro 5, but we found both phones to hold the same level of signal.

There is also the latest version of the mTouch combo key (2.1), a signature feature of the few recent Meizu models - it's a regular push key combined with a touch key and a fingerprint scanner.

Handling the Meizu m1 metal is a pleasurable task - the shell materials provide for an excellent grip, the chamfered edges too. One-handed operations are a tough job, but there are lots of software optimizations to make this possible. And while a 5.5" isn't exactly a pocket-friendly size, the m1 metal's thin profile and rounded edges makes it very easy to slip in any pocket.

Now that we are done with the interesting stuff from our tour, it's time for the trivia. The front of the m1 metal has the earpiece, the 5MP selfie snapper and a couple of sensors above the display and the mTouch key below. We really like Meizu's implementation of the Home key and its all-in-one functionality, though it does take some getting used to.

The front of m1 metal

The left side is where the ejectable SIM/microSD tray is, while the right has the volume rocker and the power/lock key.

The sides of the m1 metal

The top of the m1 metal houses the audio jack and the second mic, while the bottom is pretty crowded with the microUSB port, the primary mic, the loudspeaker grille and some screws.

A peek over the top and bottom

Finally, the 13MP camera is lying flat on the back, accompanied by the dual-tone LED flash.