The Gallery in Android 4.3 Jelly Bean retains its ICS looks and functionality. The Default view of the gallery is Albums, the first of which is always the Camera album, which has a camera overlay icon too. Rather than the familiar stacks, the app uses a grid of photos, two on a line.

A handy option is the Make available offline feature - it lets you easily select multiple online albums and download them for offline viewing. The Gallery app supports online albums like Picasa (but not Facebook).

Getting inside an album displays all the photos in a rectangular grid, which is horizontally scrollable.

The settings menu lets you do simple edits to a photo (rotate, crop) or go into a more capable editor with a lot more options. The editor can be accessed from a small icon from the bottom left hand-side corner and offers light adjustments (so you can bring out the shadows or the highlights), effects, color styles, red eye correction, straightening a photo, sharpening and face glow (which detects faces automatically). Most of these options have a slider that lets you fine-tune the strength of the effect.

The video player has retained its stock Android interface. Motorola however, have added much better codec support than the one found in Nexus devices. The video player is now perfectly usable out of the box - it plays a host of formats which include H.263, H.264, MPEG4, VC-1, VP8 in up to 1080p resolution.

The only files the Moto G refused to play were MOV videos and a single DivX file (for unknown reasons).

You can also wirelessly share videos with a Wi-Fi enabled TV. You can either use the good ol' DLNA technology for sharing multimedia content or use the Miracast protocol for direct mirroring of the smarthone's interface on the big screen.

Google's own music player called Play Music features the spanking Listen Now feature which tries to determine what you like and the sequence of your track-changing so that it can start offering you music you might like to play next.

Google Play Music also gives you the option to stream on your smartphone your whole music collection that you may have on your computer. There's also the nifty option of downloading the content onto the device if you want to have there for connection-less times.

The FM Radio is a pretty straightforward affair. Once you plug in a pair of headphones (to act as an antenna), the app will scan the stations available in your region. You can also the region manually if the app doesn't configure it.

The Motorola Moto G did quite well in our audio test, posting scores that would make even a flagship proud and garnishing them with well above average volume.

When connected to an active external amplifier the smartphone showed great dynamic range, signal-to-noise ratio and stereo crosstalk. Its frequency response could be better in the lowest and highest frequencies but was close to perfect for the rest of the range. There were no traces of distortion, either.

The great news is, besides some extra stereo crosstalk, there's virtually no degradation when you plug in a pair of headphones. And with the volume levels pretty high in both tests, the Moto G earned an excellent mark here. 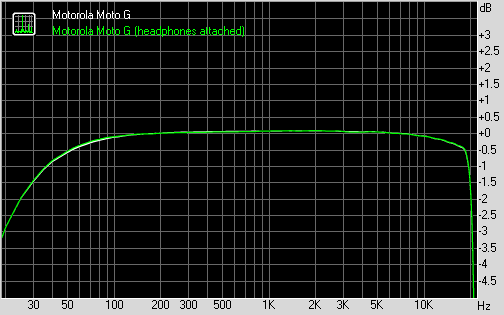