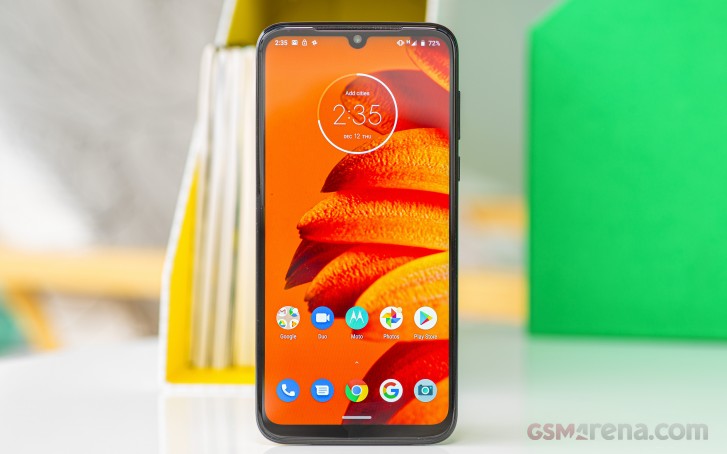 In terms of brightness it does okay, though LCDs should be able to go brighter than the 581nits we got out of the Moto G8 Plus in adaptive brightness mode. If you're operating the slider on your own, you'll get 477nits. The numbers are nearly identical to the ones we measured on the G7 Plus. Contrast is reasonably good as well, around the 1500:1 mark, though the blacks do exhibit a noticeable glow in the dark if you're viewing the display off-axis. And if you have a mostly white content showing, you'll see that the display is dimmer around the extreme edges along its entire perimeter.

Color reproduction is consistently off on the Moto G8 Plus, regardless of which of the three color modes you choose. Be it Natural, Boosted, or Saturated, you can expect a strong blue shift of the white and grays, to the tune of a DeltaE of 12. That is not so bad - it's not a color accurate screen but it's not a deal-breaker.

A key step up from the previous generation is the Moto G8 Plus' battery capacity - 4,000mAh vs. the G7 Plus' 3,000mAh. Add the more efficient chipset into the mix (11nm vs. 14nm) and we were expecting a meaningful improvement in battery life.

Indeed, that's what we got. The Moto G8 Plus posted very respectable numbers in both of our screen-on tests with 16 and a half hours of Wi-Fi web browsing and 14 and a half hours of looping videos offline. The close to 27 hours of voice calls are decent too, though not strictly impressive.

In the end, the Moto G8 Plus posted an Endurance rating of 87 hours. Compare that to the 59h rating of the Moto G7 Plus and the old phone's 11 hours on the web, less than 10 hours of video and 19 hours of talk time. 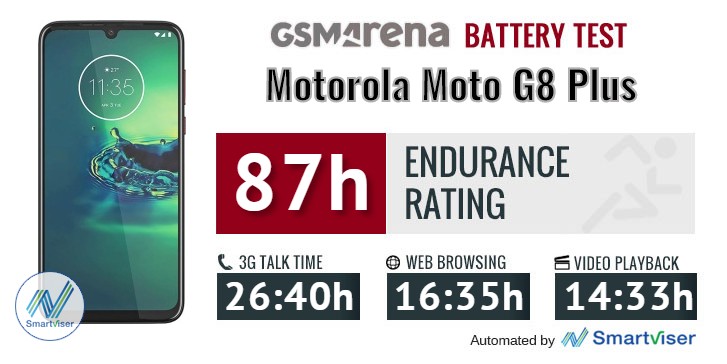 Our battery tests were automated thanks to SmartViser, using its viSer App. The endurance rating above denotes how long a single battery charge will last you if you use the Moto G8 Plus for an hour each of telephony, web browsing, and video playback daily. We've established this usage pattern so that our battery results are comparable across devices in the most common day-to-day tasks. The battery testing procedure is described in detail in case you're interested in the nitty-gritty. You can check out our complete battery test table, where you can see how all of the smartphones we've tested will compare under your own typical use.

Using the supplied adapter, the Moto G8 Plus takes over two hours for a full charge (2:06h), and you'll be looking at 36% half an hour into the process. It's not the fastest charging around is what we're saying.

The Motorola Moto G8 Plus has a stereo speaker configuration. It's a common solution in which the earpiece doubles as a second speaker, but there's a twist in that it handles its respective channel on its own. Typically, earpieces only carry the mid/high frequencies of one channel, while the 'primary' loudspeaker handles the other channel's mids and highs and all of the lows. Well, there's a strict left-right separation on this Moto. 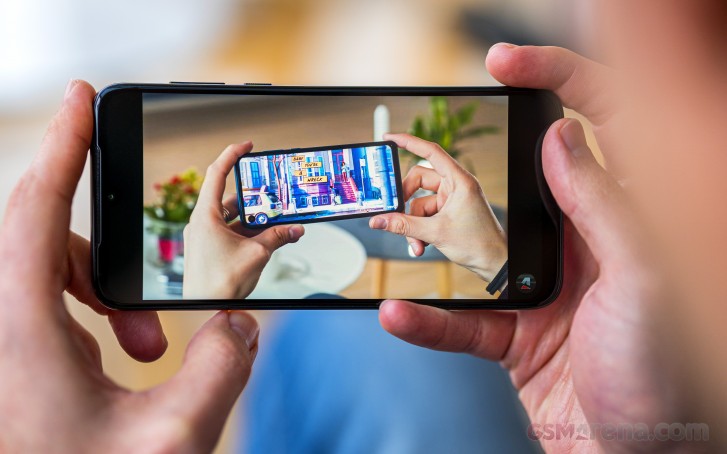 It's quite a loud setup too, easily placing in the Excellent category in our three-track test. It's particularly good with voices too, cranking out decibels while remaining nicely clean. It's not as impressive in the low register, so don't go expecting much bass, even as smartphones go.

When we connected an active external amplifier to the Moto G8 Plus’ 3.5mm audio jack, it delivered impressive audio output. It reproduced the track with perfect accuracy while maintaining very high volume levels.

Even more impressively, the output was almost unchanged when we plugged in our standard testing headphones. Even the stereo separation was barely affected - something very few phones can match. Loudness remained among the highest around, too, adding up to a stellar performance here. Great job, Moto!