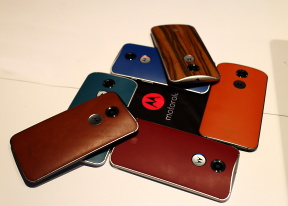 The new Moto X maintains the high customization factor of the original but it's a much more premium device, enough to challenge the likes of the HTC One (M8), Sony Xperia Z3 and the Samsung Galaxy Note 4. Like the Note 4 it has an aluminum frame but you can get the Motorola with actual leather on the back.

The metal frame is exposed on the sides and becomes even more prominent on the top. The overall shape is the same as the original - curved back that is 9.9mm at its thickest, with the characteristic curve at the top of the back and the trademark concave Motorola logo, which isn't a button by the way.

The metal sides of the Moto X

While almost the same shape, the new Moto X has a screen that's a half an inch bigger and sharper to boot thanks to the jump to 1080p resolution. This bump in screen size makes the new model nearly 12mm taller and 7mm wider than the original, it's also bigger than the 5.2" LG G2 from last year. At least it's shorter than a Sony Xperia Z3 (but almost 3mm thicker).

The sloped sides of the phone do conceal some of its bulk but people who wanted a compact flagship device will be disappointed.

The silhouette may be the same but the face of the Moto X has changed to a large Moto E. Here the two horizontal bars are front-facing stereo speakers, putting it in direct competition with the HTC One (M8) and Sony Xperia Z3. Some will find the horizontal bars less than attractive though.

The face of the new Motorola flagship has three IR sensors (you can easily spot the two on the bottom of the white version). Those enable hand gestures, you can wave over the phone to activate its active display feature (hello, Galaxy S4 and Quick Glance). Another way to wake up the phone is saying "OK Google Now" or any other phrase you like.

As for the screen, the Moto X has a 5.2" 1080p Super AMOLED. This pushes the pixel density from 312ppi to 424ppi. While not everyone might notice an improvement, 720p would not have worked on such a big screen (not for a premium device that is). The screen is guarded by Gorilla Glass 3, same as before.

Going around the back again, the phone upgrades to a 13MP camera with 2160p video capture. It has a rare ring flash - a translucent plastic around the camera lens with an LED on the left and right. We're not sure two LEDs make a ring flash though, the Acer Liquid S2 had four. A ring flash is meant to provide softer shadows for better-looking photos in the dark, we'll have to test that to see how well Motorola got it to work.

A 13MP camera with ring flash

For the back you have a big choice of colors, plenty of different woods and several leather options. You can also pick the colors of certain elements on the phone.

Motorola abandoned the custom chipset approach and went with a standard Snapdragon 801 (8974AC) chipset. Nothing is lost, the S801 has the hardware for active listening that Motorola had to specifically work into the Moto X chipset last year.

And it's as snappy as you can expect for a powerful chipset running almost pure Android. "Almost" pure as Motorola has enabled its active display and active listening magic into the software. There's 2GB of RAM, same as last year.

On the connectivity side we can confirm there's LTE connectivity - there was surprisingly little info on that to the point where it seemed like Motorola decided to omit it for some reason.

You get the usual dual-band Wi-Fi a/b/g/n/ac, Bluetooth 4.0 LE and NFC, same as last year. The phone uses a Nano-SIM card so you can pop the one from your old Moto X out and put it into the new one. The card toes on top, near the 3.5mm jack.

If you're looking for a microSD card slot you won't find one. The base storage is 16GB and you can upgrade to 32GB (there's no 64GB option this time around). To be honest we were hoping for more storage or a microSD slot.

A microUSB 2.0 port is at the bottom.

Another disappointment is that the battery is sealed and has only 2,300mAh. The LG G2 has 3,000mAh and the Sony Xperia Z3 Compact (which is smaller in every direction than the Moto X) has 2,600mAh. We'll reserve judgment until we run our battery tests but the reality is that a bigger battery is always better, even if the phone is very power efficient.

For voice calls the Moto X has four microphones (four!), which are used to combat background noise.