The earpiece and one of the front-facing stereo speakers reside above the display, tucked under a small grille. The front-facing camera, the ambient light, and the proximity sensor are also in the area.

A look above the display

The mouthpiece and the other stereo speaker can be found below the screen. There is nothing else there.

The view below the screen

There is nothing but two tiny antenna strips on the left side of the smartphone. The power/lock key and the volume rocker are positioned on the right.

The 3.5mm audio jack and the slot for the nano-SIM sit on top of the Nexus 6. The microUSB port is on the bottom.

The top and bottom of the handset

On the back of the device, you will find the 13MP camera and its dual-LED flash. The flash setup is the same as the one found in the Moto X (2014).

The back of the Nexus 6

Motorola's signature circular dimple and a large Nexus logo are also found on the back. Two tiny microphone pinholes also reside there.

Nexus 6 is quoted as being capable of offering up to 24 hours of mixed usage, up to 10 hours of video playback, and the same amount of web browsing over an LTE network.

We put the Nexus 6 through our battery test routine and it achieved a combined endurance rating of 70h. This means that you will easily make it through two full days of usage if you opt for an hour each of telephony, web browsing, and video playback. 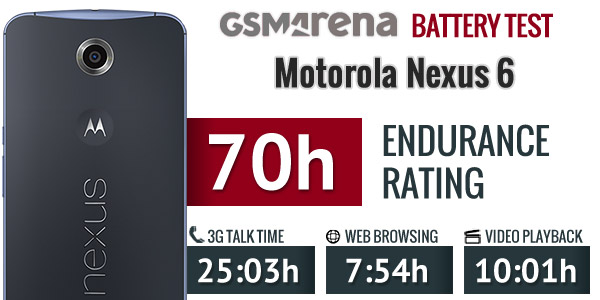 Our proprietary score also includes a standby battery draw test, which is not featured in our battery test scorecard but is calculated in the total endurance rating. Our battery testing procedure is described in detail in case you want to learn more about it.

There's more to the Nexus 6 battery performance than the mere battery life numbers. It also comes bundled with the superb Motorola Turbo Charger.

Thanks to Qualcomm Quick Charge 2.0 tech, only in 15 minutes worth of charging, the charger can deliver enough juice for up to 8 hours of mixed usage. The trickery works only when the battery is significantly drained - the charging process slows down as you top it up.

We tested the Motorola Turbo Charger with the Nexus 6. We plugged the device with 9% battery left and checked back in 15 minutes to find it with 30% of juice - an increase of 21%. Depending on your usage pattern, you will probably be able to make it through several extra hours of use on that backup power.

To top things off, Nexus supports Qi wireless charging. It is considerably slower than the Turbo Charger, but much less intrusive.

Motorola Nexus 6 is available in two models that are region specific - XT1103 for the Americas, and XT1100 for the global model. In either case, the phablet covers all bases when it comes to cellular data standards - quad-band GSM/HSDPA, tri-band CDMA (only the Americas model), WCDMA (bands slightly differ in the two models), and LTE connectivity (once again with slightly differing bands).

On the local connectivity front, the device offers Bluetooth 4.1 alongside Wi-Fi with a/b/g/n/ac standard compatibility. MicroUSB 2.0 port with USB host is also at hand. Positioning is covered by A-GPS and GLONASS support.

The device allows you to share all sorts of media via NFC by simply touching the device and other compatible devices back-to-back.