Motorola RAZR i review: Intel inside

The Motorola RAZR i comes in an average sized box, which holds the usual set of accessories - a wall-mount plug, which has a USB slot on its side, a microUSB cable, a set of headphones as well as a tool for removing the SIM card.

Motorola RAZR i retail package and its contents

There's no microSD card supplied or any other nice surprises in the box, but considering that even high-end phones of late fail to offer such extras, we aren't vastly disappointed.

One of the Motorola RAZR i's key selling points is its extremely compact body. Standing at 122.5 x 60.9 x 8.3 mm this is one of the most compact smartphones around and certainly the most compact to pack a screen of this size. Moto likes to call the display edge-to-edge and while that's not entirely true and there is some bezel left, the RAZR i still does a great job of utilizing the available space.

The weight of 126 g nails the balance between hand feel and comfort of use. Single-handed use is a breeze - and that's easier said than done on a 4.3" screen. There's a reassuring heft to the RAZR i, the kind of solid feel we've been missing since the Nokia E-series, and yet, it's not a burden to carry around and easily slips into pockets.

The Motorola RAZR i looks identical to its DROID RAZR M cousin, which we reviewed a few weeks ago. We're quite fond of that industrial look with visible bolts on the sides, the aluminum frame and the Kevlar back making a nice mix.

There's no denying that the choice of materials is pretty impressive for a midranger, too. Motorola has made Kevlar the RAZR family's signature element, but metal is also getting increasingly hard to come by lately.

The only grudge we have with the Motorola RAZR i exterior is the visible gap at the sides where the two halves of the body meet. That's just about the only aspect of the phone's build that looks cheap, especially when the gap fills with dust.

Above the display you will find the usual bunch of sensors, the earpiece and front-facing camera, as well as a tiny status LED.

It's pretty crowded above the display

There's nothing but the mouthpiece below the screen.

The mouthpiece is at the bottom of the front panel

The microUSB port, microSIM, and microSD card slots are located on the phone's left side. The card slots share a thin plastic lid.

On the right side, you will find the power/lock key, as well as the volume rocker and the camera key. The bad news is the shutter key has no half press. On the upside, it will power up the camera even when the device is locked - and it's a near instant launch too.

We find it rather strange though that the three buttons on this side are all made of different materials and have different colors. It gives this particular profile of the smartphone a cheapish look and we would have really preferred if Moto avoided it.

The three keys on the right

The unprotected 3.5mm audio jack is located at the top of the Motorola RAZR i.

There're no functional elements whatsoever on the Motorola RAZR i tapered bottom.

The bottom of the smartphone is bereft of controls

The 8MP camera, the LED flash, and the loudspeaker are located at the top of the RAZR i's splash resistant back. The Intel inside logo is also here to indicate the unusual chipset that's powering this smartphone.

The Motorola RAZR i is powered by an ample 2000mAh battery, which combined with the energy efficient display of fairly modest resolution, was expected to do pretty well in our battery test. The Intel chipset is a mystery to us, but having seen the Motorola DROID RAZR M do well here, we would be shocked if the RAZR i failed to match its sibling's battery backup.

The Motorola RAZR i managed to achieve the almost unbelievable endurance rating of 64h. This means that if you were to use the smartphone for an hour of talking, an hour of web browsing and an hour of video playback per day, you'd need to charge it once every 64 hours. 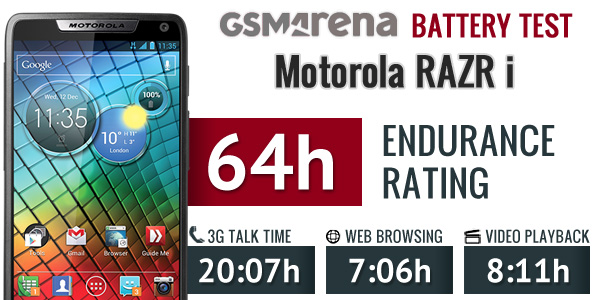 The reason for the extremely impressive performance seems to be the Intel-designed modem that the RAZR i employs. While the smartphone is hardly the longest lasting when it comes to video playback and web browsing, it blasted the competition when it came to talk time and stand-by.

This means that if you are the power-user kind that uses their smartphone more for non-telephony-related activities than actual talking activities you are likely to need to charge way more often than its test result suggests.