XpressMusic player is not spectacular

The XpressMusic branding raises the bar high for the Nokia 5320 music player. Good it is but by no means exceptional: just on par with other recent Symbian devices. It has a huge number of supported audio formats, including MP3, AAC, eAAC+ and WMA but little things to top the business-minded Nokia E71 for example.

However, the dedicated music keys on the side and the new active standby layout, where the music player is one click away, are things that enhance the sonic experience. Quite naturally, the player can also be minimized to play in background. In this case a tab appears on the stand-by screen indicating the currently running track.

Sorting your songs by artist, album, genre and composer is automatic and searching tracks by gradual typing of the desired name is also available. Tracks are transferred to Nokia 5320 via Bluetooth, USB or by simple download. You can also use a card reader for that purpose and transfer them directly to your memory card.

Upon completing a USB transfer, or inserting a card, the phone automatically prompts scanning for new music tracks and, if allowed to do so, adds the new ones to the music library. The player comes with five equalizer presets and, should they seem insufficient, you can edit them or create new ones in a matter of seconds.

Nokia 5320 XpressMusic also features an innovative feature called Say and Play. By using the phone's built-in speaker independent voice recognition, it allows you to play any stored track by simply saying its title or artist. A longer press on the My Own key activates this feature and it works much like voice dialing.

The Nokia Say and Play feature currently supports English and the pre-installed UI languages. However it should be able to pick up titles in any languages if they are pronounced in English manner or with UI language pronunciation.

However due to some unknown and probably unit-specific) problem we couldn't get it running on our sample unit, although it was a final retail handset.

Finally, Nokia 5320 also comes complete with A2DP support. This means you can enjoy your music on a stereo Bluetooth headset.

Audio quality is good, but not great

We certainly hoped audio quality will at last give XpressMusic more edge. The results turned out good but by far not the best in business. Still, the 5320 does stand out among most other Nokia handsets.

Our audio quality test showed that 5320 struggles to keep distortion levels under control. The stereo crosstalk is also far from the best we've seen but the rest of the readings seem just fine. Dynamic range and noise levels were by far the most impressive among them, with Nokia 5320 getting some of the best numbers there. So, with the 3.5mm standard audio jack and the memory card slot, Nokia 5320 seems ready to serve music to go. 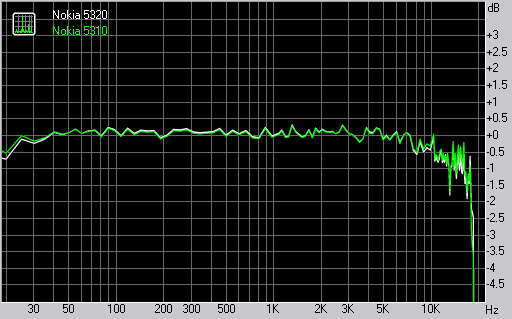 Nokia 5320 features Real player for playing your video clips. The video player can be displayed in both normal and fullscreen modes. When in full screen, the softkey functions are hidden so that they don't spoil the viewing experience and only pop up when a key is pressed.

With the smallish screen in mind however, you shouldn't be too demanding.

FM radio with RDS on board

The FM radio on Nokia 5320 has a nice simple interface and can automatically scan and save the available stations in your area. Unlike most other Nokia handsets out there, RDS support is included and the Visual radio is also on-board. If internet connection is available, the Visual radio application can download all the local stations and save them to the handset with their names.