As seen on TV

The S40 gallery is way behind what virtually all other platforms have to offer. The Nokia 5330 freshens it up a bit, but a new look and improved functionality are due if it is compete with rival platforms.

In fact the Nokia 5330 Mobile TV Edition offers only a single view mode, displaying a grid of 12 pictures on the screen. At least zooming in on a single picture is pretty comfortable now with the zoom in and out shortcuts placed on the middle and right soft keys. It’s also faster and smoother than we are used to seeing from most of its predecessors.

Mobile TV is not for all

What gave the Nokia 5330 Mobile TV Edition its name was the DVB-H support the phone comes with. However, before you even start thinking of getting yourself one of these, you’d better check if DVB-H standard (H stands for Handheld) has already landed in your country (or town).

Unfortunately, Nokia seems to have got the Nokia 5330 Mobile TV specs wrong on some of its websites, which list the phone as compatible with the DVB-T standard (T stands for Terrestrial).

The Mobile TV app interface is pretty simple. Once opened, it starts searching for channels. Keep in mind that you can watch Mobile TV only if the enclosed headset is connected to the phone since it serves as an antenna.

The music player of the 5330 looks decently and has a good set of features. It has great all-round functionality, including album art, and a fair number of formats are supported.

The music player is controlled either with the dedicated touch music keys on the screen’s left or with the D-pad. Besides all the typical functions, the music player of Nokia 5330 Mobile TV Edition also sorts songs by artist, album and genre. The player works with AAC, AAC+, eAAC+, MP3, WMA, AMR-NB. Naturally A2DP profile is supported, allowing the use of stereo Bluetooth earphones.

As usual, the artist and title of the currently playing song are shown on the homescreen. They appear in the Radio and music area on the homescreen so they need to be active for the info to be displayed. You can play/pause or change the current track using the dedicated touch sensitive music keys.

An alternative to the preloaded content on 5330 is the FM radio. It matches the music player interface and covers all basic functions.

Even if the Nokia 5330 Mobile TV Edition comes with a decently sized screen (for the phone’s class) what hinders it from becoming a real PMP is the limited functionality of its video player.

While many of the 5330 competitors feature support for DivX/XviD video files out of the box, the 5330 will only be able to play 3GP and MP4 videos.

Videos can be played in fullscreen mode, fast-forwarded or rewound and that’s that.

To say that the audio quality of the Nokia 5330 Mobile TV edition is similar to the on of Nokia 6700 slide would be the understatement of the year. The audio output of the two matches so well that we are absolutely convinced that there's identical audio hardware inside both.

That means that while only average in terms of loudness, the Nokia 5330 Mobile TV edition audio quality is as clear as we have seen mobile phones get. Not that this comes as a great surprise as all Nokia handsets that we have tested recently were pretty impressive. Even the low-key 2710 did an excellent job with our test sounds.

And given the presence of a 3.5mm audio jack, we can safely say that it's about time that you retire your dedicated music player. Here are the results so you can see for yourselves. 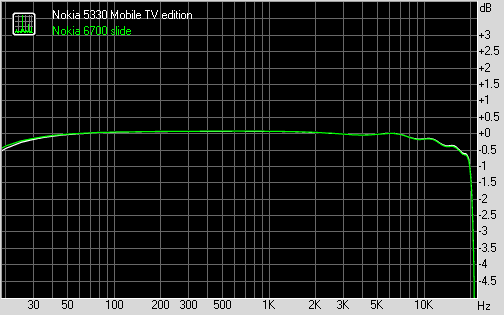