The Nokia 6 comes in a flat box with the phone printed over an image of two folks holding hands - 'Connecting people', get it? Inside there's enough to get you started - a 5V/2A charger, a microUSB cable, and a headset.

Weighing in at 169g, the phone is a bit the heavy side for a 5.5-incher. Most other devices in this segment are a few grams lighter, but you're unlikely to notice, even if you have them for immediate comparison.

If the new Nokia got one thing right on the first try, it's build quality. The Nokia 6 is one of the most solid-feeling phones we've tested lately. And even if we're not ones to test durability, we do go on YouTube, and this phone is doing splendidly in bend tests. It looks like the legendary Nokia toughness lives on.

Phone abuse aside, the 6 looks like it means business. It's not good-looking, strictly speaking, but it's appealing in a cold, utilitarian way. An engineer might love it, but a teenage girl would look the other way.

Now, that same engineer would grumble about matte finish's penchant for keeping smudges visible. However, he'd quickly see that the Nokia 6's aluminum rear is miles better at staying clean than its glass counterparts, and whatever marks remain on it after contact are easily wiped away. A metal-backed phone requires some sort of an antenna placement solution so that the device can serve its primary purpose, which isn't all about looks. Here it's done the like the iPhone 7: placed top and bottom, the plastic antenna inlays are very discreet, particularly on our black unit.

Unfortunately the camera isn't quite as unobtrusive. The Lumias of old typically opted for a circular design with a smallish lens and a flash on the side (1520, 930), on occasion placing the flash inside a larger black glass element (830). The Nokia 6 uses the second approach, but the glass is flattened on the sides. We feel it looks too Moto and not enough like Nokia.

It's raised a bit too - about half a millimeter. If you're one of those that puts their phone on a table, tries to get it to wobble, and then complains when it does - well, you'll have issues with the 6. If you're a sane person, you'll appreciate the fact that the device rests on the flash end of the bump, and not on the actual lens.

Flip over to the front and you're greeted with some more black - the 6 is staying true to the serious look. A Nokia logo in the top right is a throwback to the old days, and the last true Nokia flagship. You shall not be forgotten, Lumia 930. 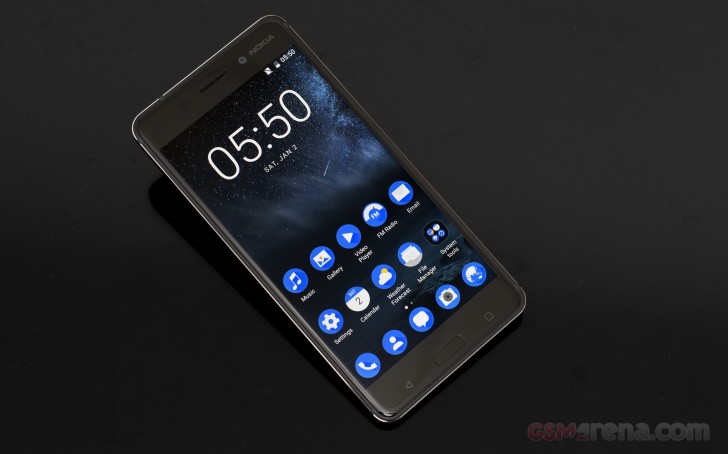 There's more than just nostalgia here, but functional bits as well. Immediately next to the logo is the front-facing camera, while the earpiece is in the center - where earpieces tend to be. This one is no ordinary earpiece, however - it also doubles as a second loudspeaker, for the left channel. To the left of it is the proximity/ambient light sensor assembly and a tiny notification LED below them.

We'll skip over the screen for now (it does have its own section on the next page), and move over to the bottom bezel. Much like the top one, it's not overly thin - both are quite sizeable, actually. Why then has the Nokia decided that the fingerprint reader must be so thin and placed so low?

It's not a huge deal, but it looks a little off - we tend to like our home buttons centered in both the horizontal and vertical axis. It's not a mechanical button, there's no travel, but it serves as Home, and for the purpose of navigation it's joined by backlit 'Back' and 'Recent tasks' capacitive keys on either side.

The sides of the phone have the same matte black finish as the back, but the chamfers of the frame are shiny polished aluminum. Apparently, the design team thought that it would be a nice accent, but we can't help but wonder 'what if all black?'

Both the power button and the volume rocker are on the right, and we can add the small power button in the nit-picking list. It's okay, it just could have been a little more substantial. All the buttons click very nicely, though - it's a much more positive feedback than the LG G6's volume controls can muster, for example.

On the opposite side is the card slot - it accepts two nano SIMs or a nano SIM and a microSD card, but not all three at the same time. If so you wish, you can go for one nano SIM, and no microSD, of course.

On the bottom of the phone there's a microUSB port for charging, wired file transfer and attaching peripherals. A USB-C port would have been nice, but Nokia went with the old one - does that count as another Lumia 930 throwback? The primary mic and loudspeaker complete the picture.

Up top there's not much to talk about, unless we start talking about the usefulness of the 3.5mm jack. We won't. There is one.

In your hand, the Nokia 6 feels reassuringly solid. The flat sides are super easy to grab and offer secure grip, but the back is somewhat slippery.