The Nokia 8 Sirocco is finally getting a stable release of the Android 9 Pie update. It brings the new gesture navigation, slices and app actions. Also, it adds Adaptive Battery and adaptive screen brightness level to improve battery life.

All of these are standard features of Pie, of course. They lean on machine learning to predict what you will do next and which apps you will use to speed up operation and improve efficiency. Digital wellbeing features are also included.

The update also bumps up the security patch to December 2018 (Google released the January 2019 patch for Pixel 3 phones only a couple of days ago). 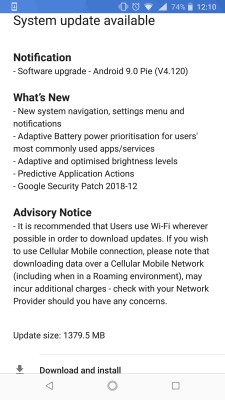 The Pie update for the Sirocco, HMD’s de facto flagship, was originally scheduled for November, but got delayed. Beta testing started in December.

Well all depends on country you live in.

Wdym? Samsung has the Pie update now for it's current gen flagships

HMD is a very typical Chinese investment where they take a (previously) well known brand and try to milk money off it (Alcatel, Motorola, being other examples).