The display on the Nokia Asha 501 is a 3" TFT unit of QVGA (240 x 320) resolution, which boils down to around 133ppi. That's not a lot by any standard, but in this class capacitive touchscreen with multi-touch support are still considered nice extras, so you shouldn't expect Retina-beaters.

Colors are nice and punchy and the screen is reasonably bright. Size may be an issue, as well as resolution, but the responsiveness has been notably improved from what we remember with the older Asha phones.

Browsing the web and watching videos isn't the most compelling experience on a screen of that screen size and resolution of course.

And here go the stats - contrast levels are pretty good thanks to the nicely deep blacks, but the brightness isn't particularly high.

The pixel arrangement is standard RGB - it's an LCD screen so you wouldn't expect anything less. 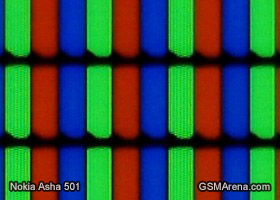 The Nokia Asha 501 features a power button on the right side, which will also lock and unlock the device, although you can do without it as the phone can be nudged out of standby with a double tap on the screen.

The volume rocker sits comfortably in the upper right corner of the phone. All three buttons (power and volume) are solid to press and easy to locate by touch.

The left side of the Nokia Asha 501 doesn't feature any controls. There's a dual-SIM version of the phone but it doesn't have a side-mounted SIM compartment, which was typical for Nokia dual-SIM handsets of old.

At the top there's the microUSB port, along with an old-gen Nokia charging port and a 3.5 mm headphones jack.

The bottom holds no controls whatsoever.

Undoing the back cover is easy - a light push on the nub at the bottom will do and the phone's bottom part will pop out of the shell.

You can then go on and take the phone out. Doing so reveals the 1200 mAh Li-Ion battery, with the primary SIM card slot under it in the very battery compartment. The hot-swappable microSD and secondary SIM card slot are on the side. This actually means they could've been accessible on the outside too but Nokia went for exchangeable covers instead.

Removing the back cover

The battery on the Asha 501 is quoted at 624 hours of stand-by and 17 hours of calls for the dual-SIM version and almost double the standby time for the single-SIM variant.