The OnePlus 8T is your typical glass-sandwich smartphone, and that's perfectly fine. A design breakthrough seems doubtful anytime soon, let alone such a thing happening on a mid-season update.

The new 8T does differ from the OnePlus 8, and the jury is still out whether it's for the better or worse. See, the display on the 8T is flat, just like it was on the Series 7 and earlier. Don't get this wrong - some of us are not fans of the curved screens at all - it's just that some fans may consider this as a downgrade. 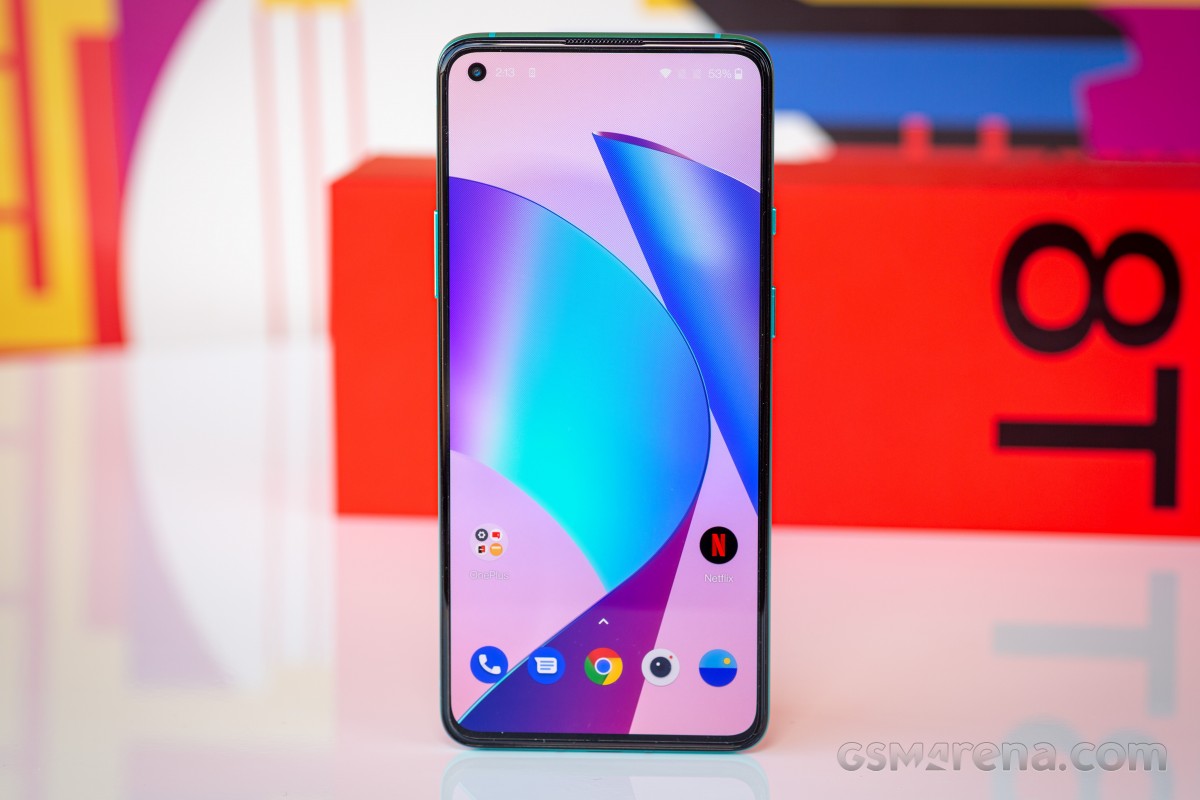 We've had our fair share of accidental touches and distorted edges, and we do welcome this move.

Then there is the aluminum frame - it feels wider now, even if this was done by merely changing the arc's radius. It's not iPhone 12 flat, no, but it does make for a noticeably better grip than what we experienced with the OnePlus 8. 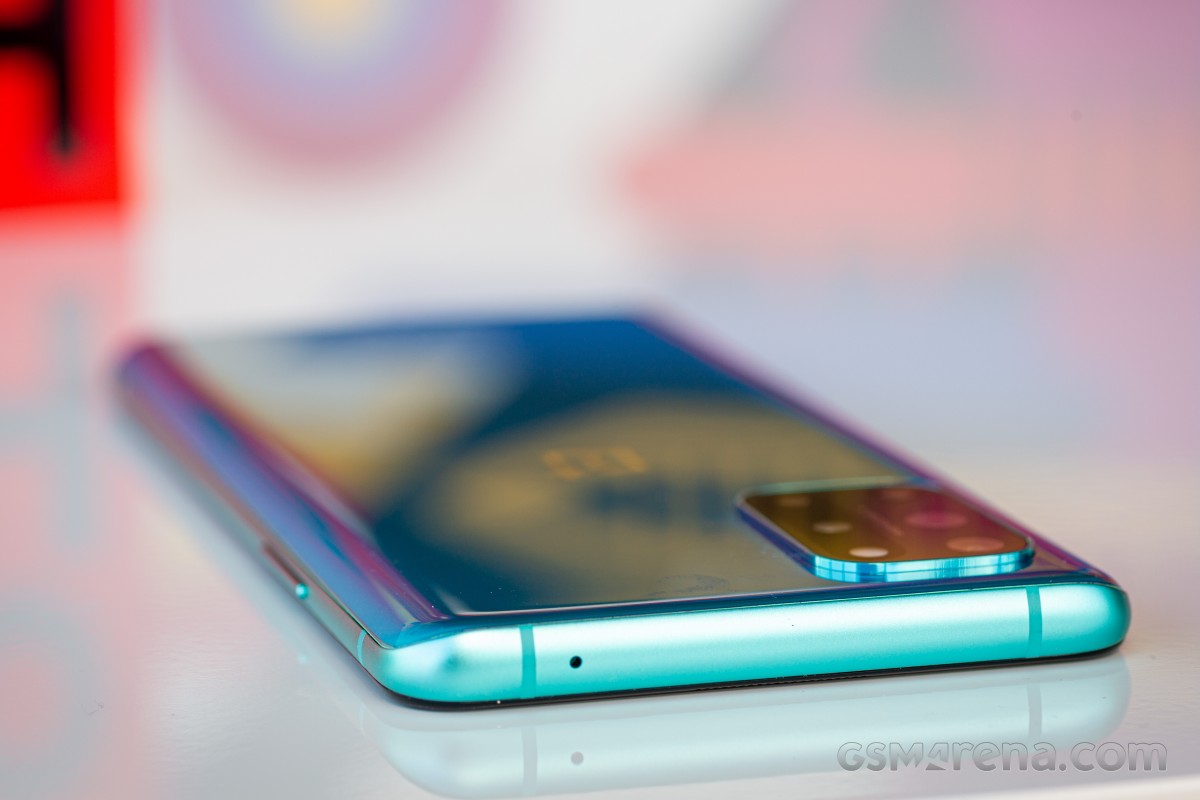 The OnePlus 8T is available in two new color options - Aquamarine Green and Lunar Silver. They affect the curved rear glass and the metal frame. And those two catchy names are not just for the nice ring they bring. They actually describe very well the paint job and the glass finish. 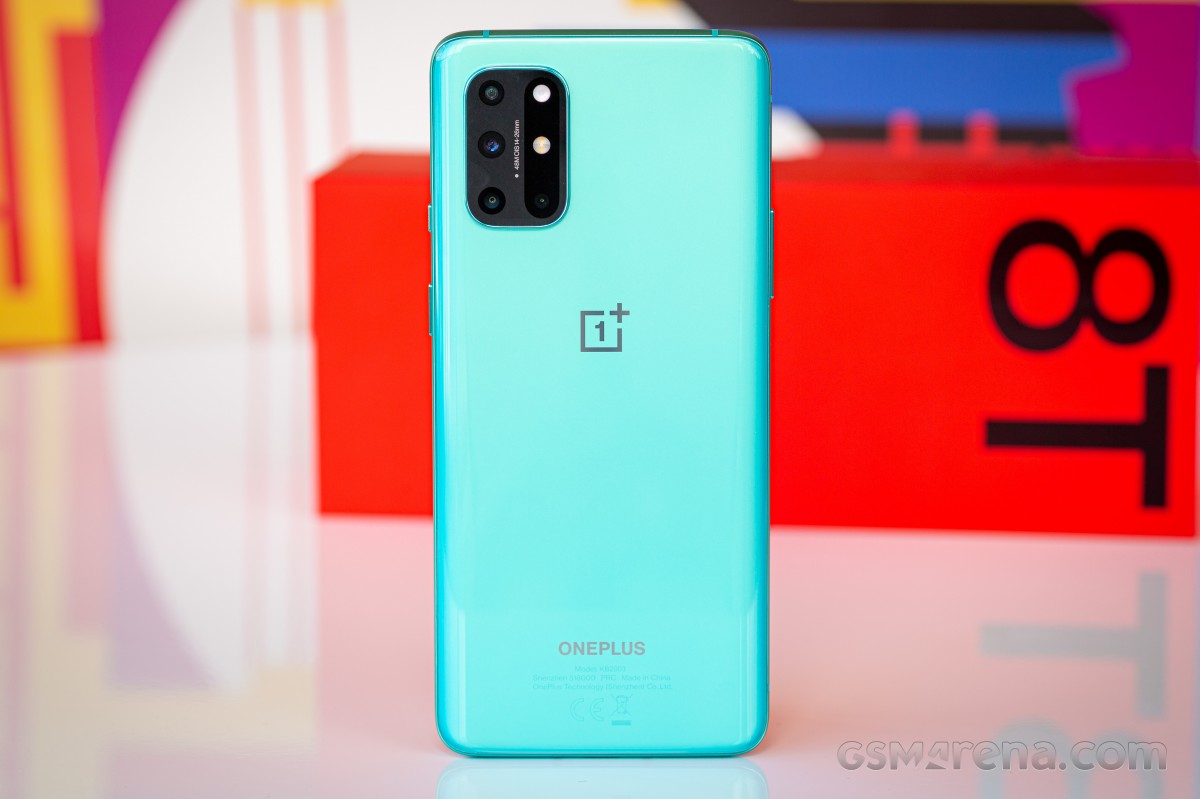 We have the Aquamarine Green, and well, our 8T is indeed looking like OnePlus has chopped a piece off the Indian Ocean around the Maldives. Or the Ionian Sea around the Greek Ionian islands. Or the Atlantic Ocean around the Bahamas. You get our drift. This mesmerizing bluish-green has a glossy finish, just like the ocean water's surface.

Then there is the Lunar Silver option, which looks pretty much like the calming silver you'd see on our Moon. Here, the glass finish is frosted, making for a cold look and feel, reminiscent of the distant Space. 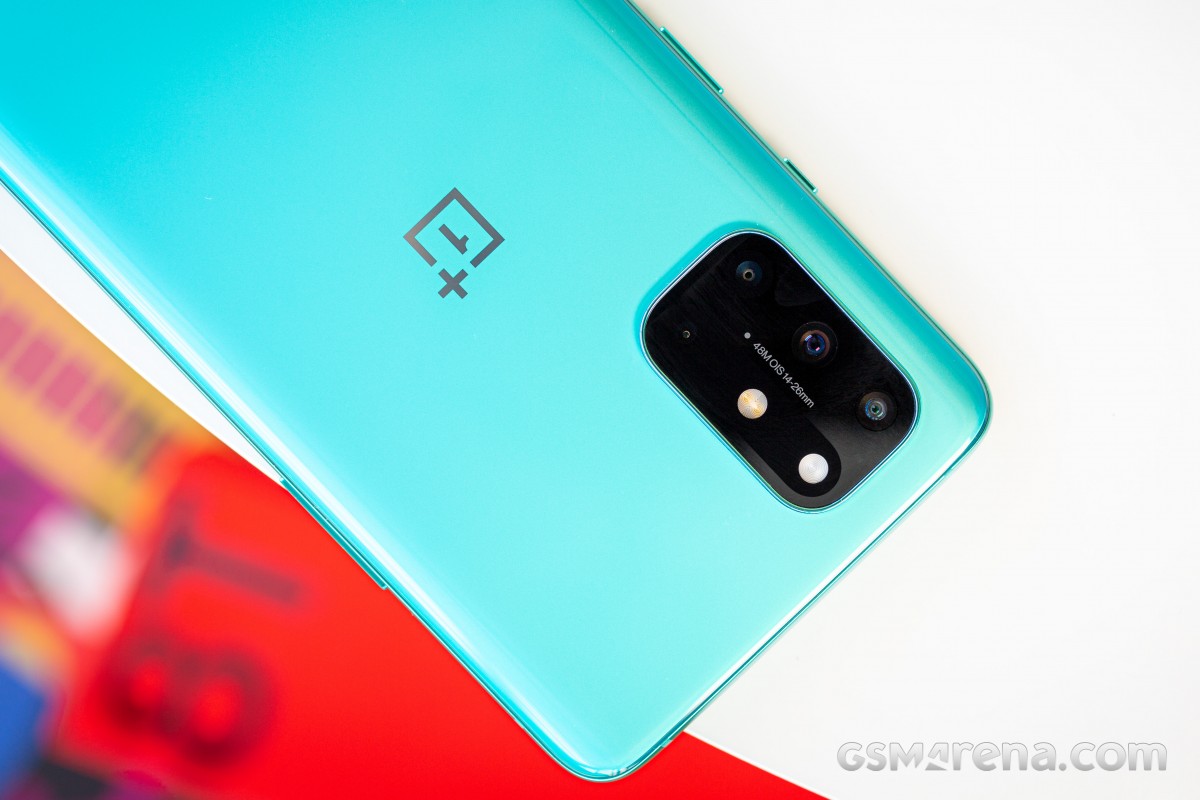 We do like when the fancy name of the color is a matching description to what you actually get in the box, and we applaud OnePlus for making the 8T exactly as described.

The font of the new 8T has the 6.55-inch Fluid AMOLED screen - same size and resolution as on the OnePlus 8. It has a small round cutout for the selfie camera around the top left corner. 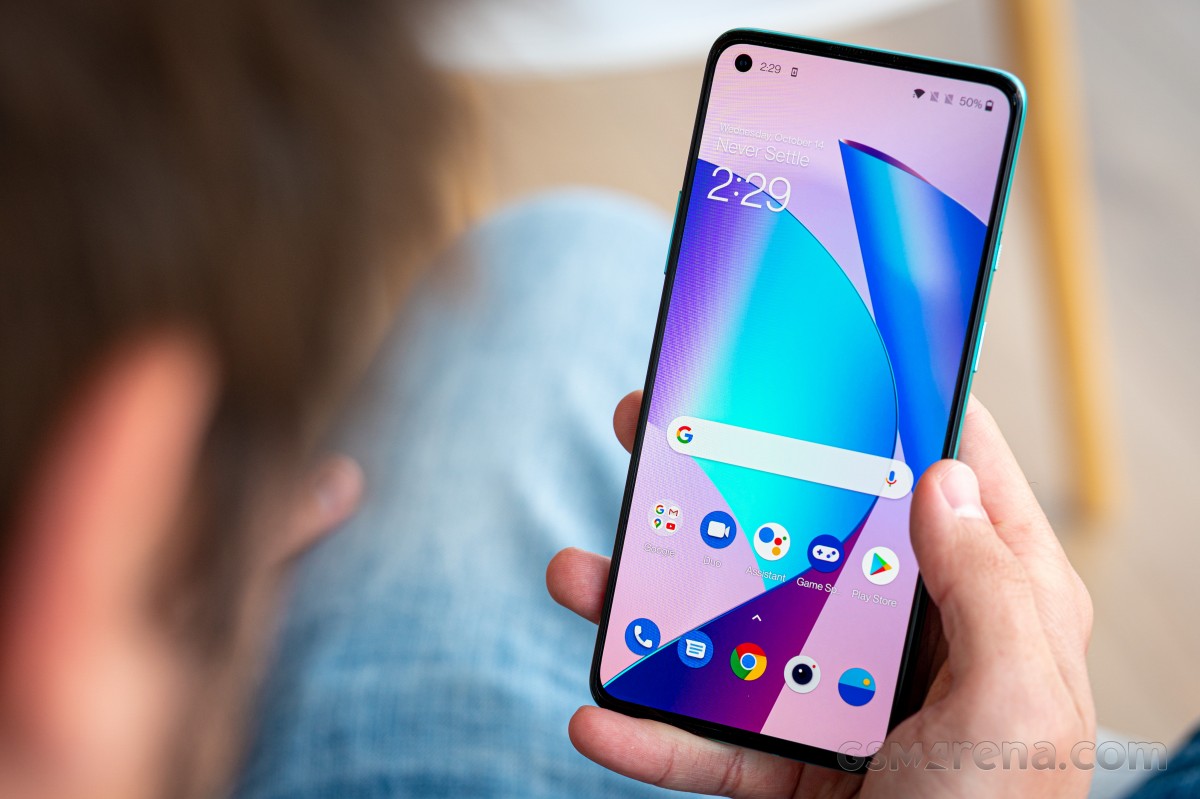 What's new with this Fluid OLED is the increased refresh rate - it's now 120Hz, up from 90Hz on the OnePlus 8. Touch sampling has also been enhanced. It's currently working at 240Hz for even lower-latency responses compared to the 180Hz on the 8.

Also new to the OnePlus 8T is the option for Always-on Display. OnePlus has made some cool designs to get you started, but there are a lot of options to make it really yours.

Above the screen is one super-thin grille hiding the earpiece, which also doubles as a stereo speaker. Meanwhile, OnePlus claims it has trimmed the chin even more compared to OnePlus 8, making for an improved edge-to-edge experience. 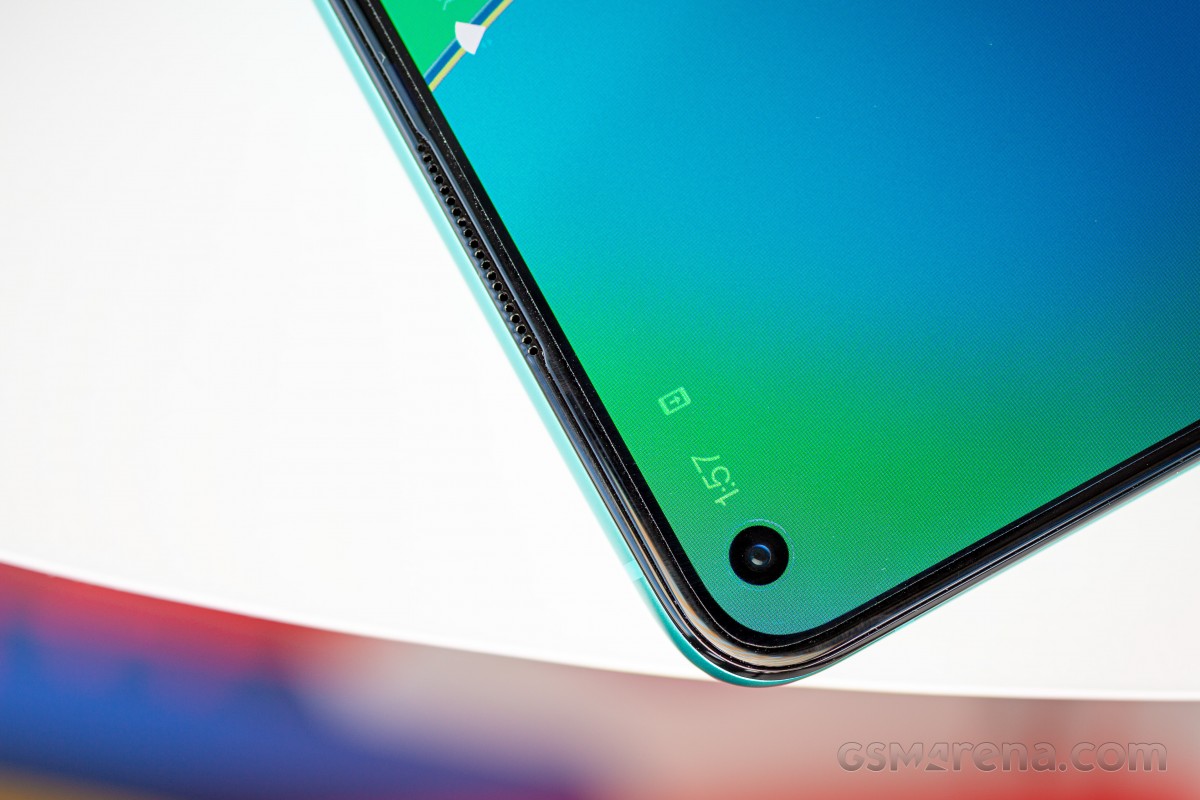 There is an under-display optical fingerprint scanner, and it is probably the same sensor as on the OnePlus 8 series. It's plenty fast, and we didn't have any issues with its accuracy. If you smudge the screen, you may be prompted to clean it up before scanning, though. 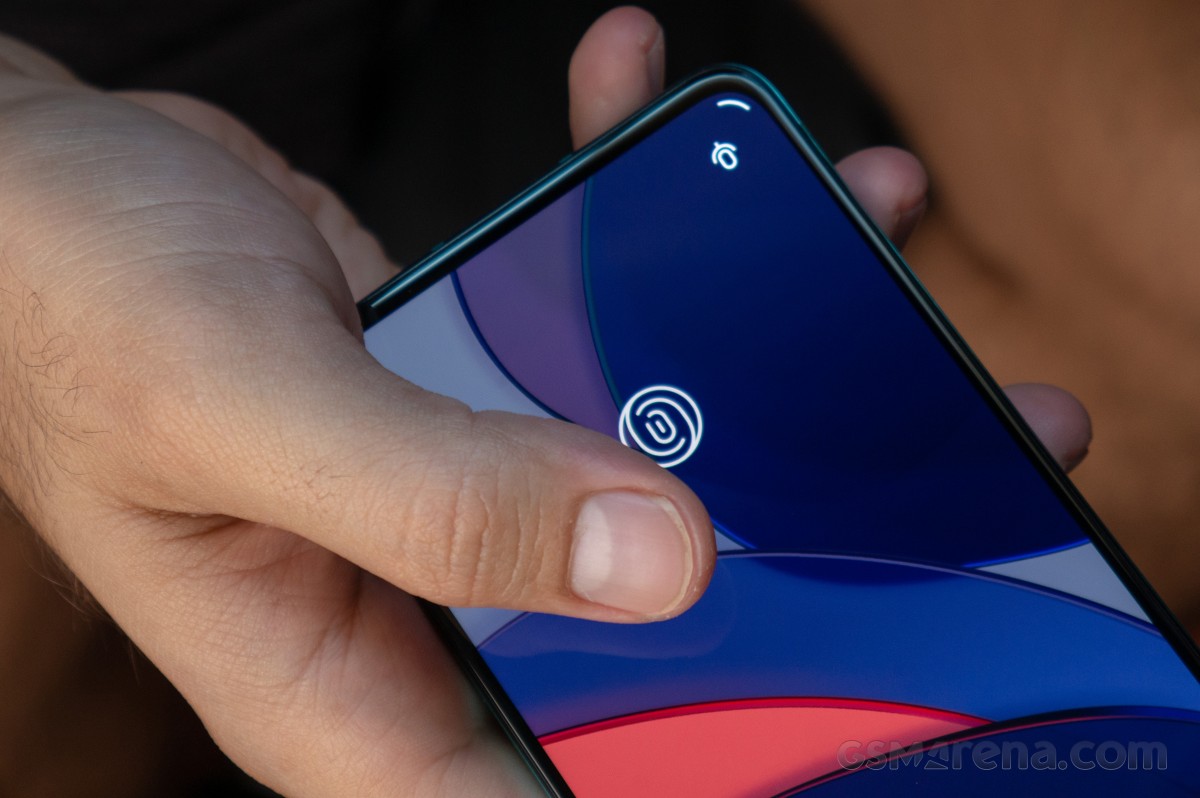 The display has Gorilla Glass 5 protection - it is a flat piece of glass, just like the new flat screen, though it has the so-called 2.5D finish around the edges, and the transition towards the metal frame won't feel sharp.

The rear Gorilla Glass 5 is properly curved around the longer sides, just like many recent phones. The only interesting thing to note here, other than the cool-looking paint, is the camera setup. It's protruding a bit, but not as much as many of the competitors'. Wobbling on a desk is minimal. 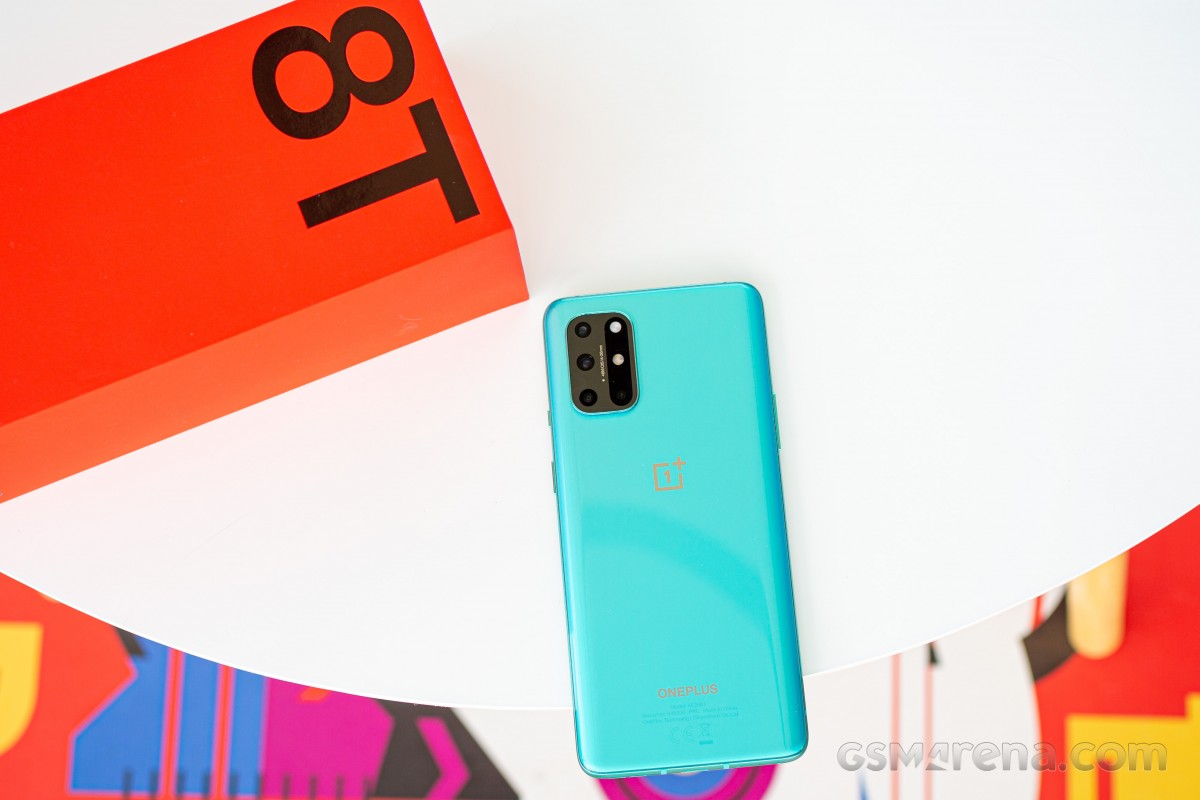 There are six symmetrical pieces on the camera glass. The first column has the three snappers - ultrawide, primary, macro. The second column contains what looks like a color temperature sensor, a dual-LED flash, and a depth camera. 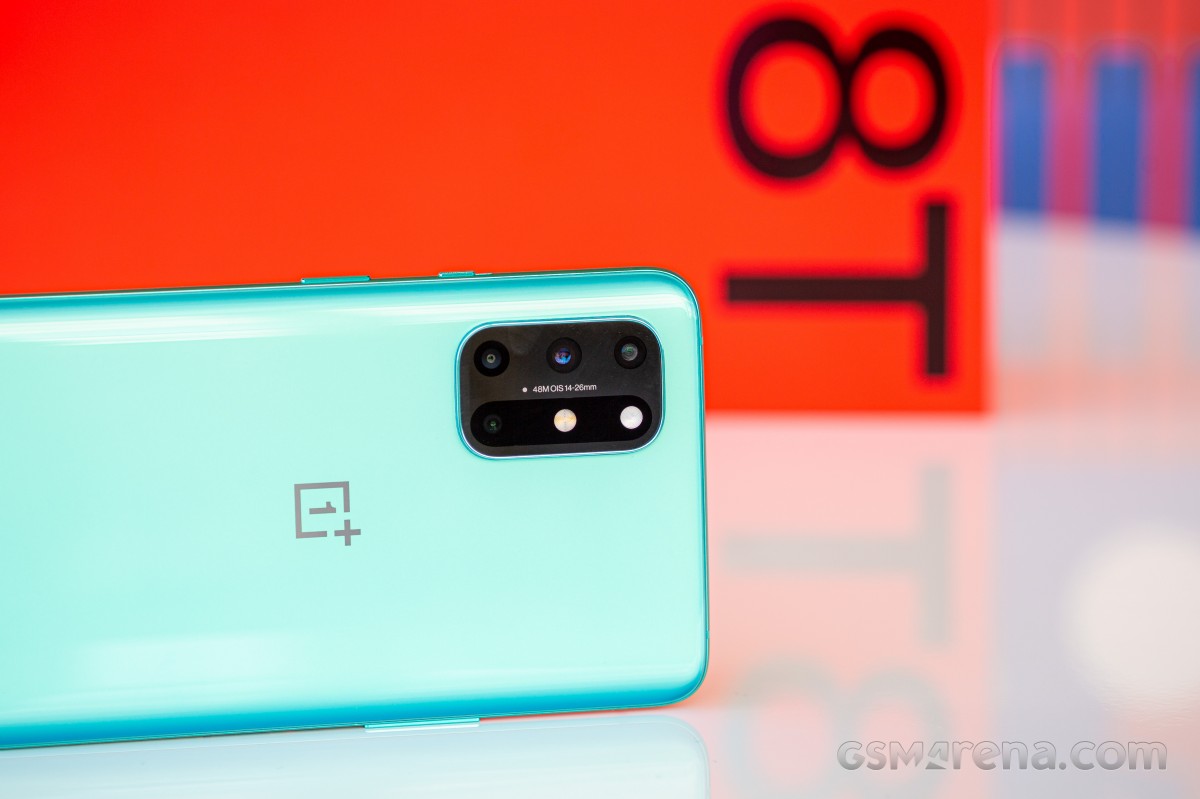 Let's look around the frame now. No matter which color of the 8T you get, the frame will always be matte. The finish doesn't improve the grip much - the shape does - but at least fingerprints and smudges are not sticky. 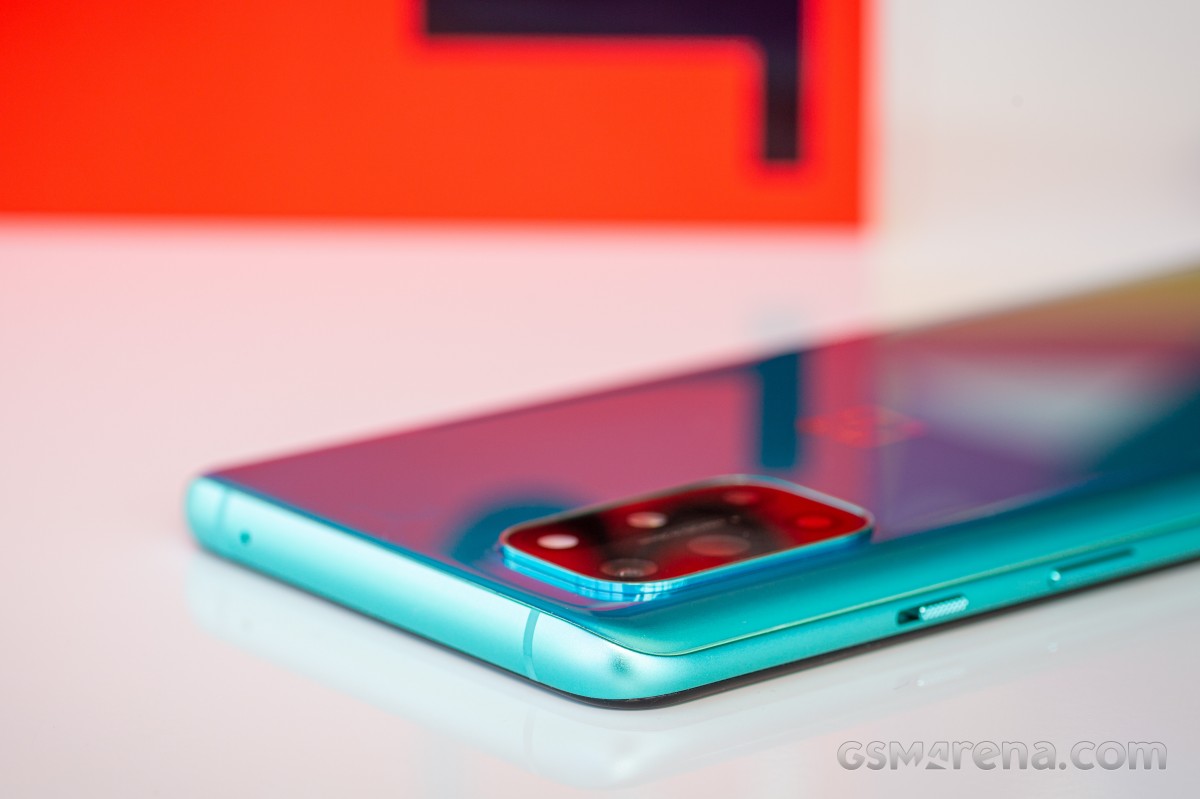 The left has a thin volume rocker with good tactile feedback. We would have liked it a bit larger, or maybe thicker, but it is what it is. The power key and the alert slider are on the left, and they are perfect in terms of shape and feedback. 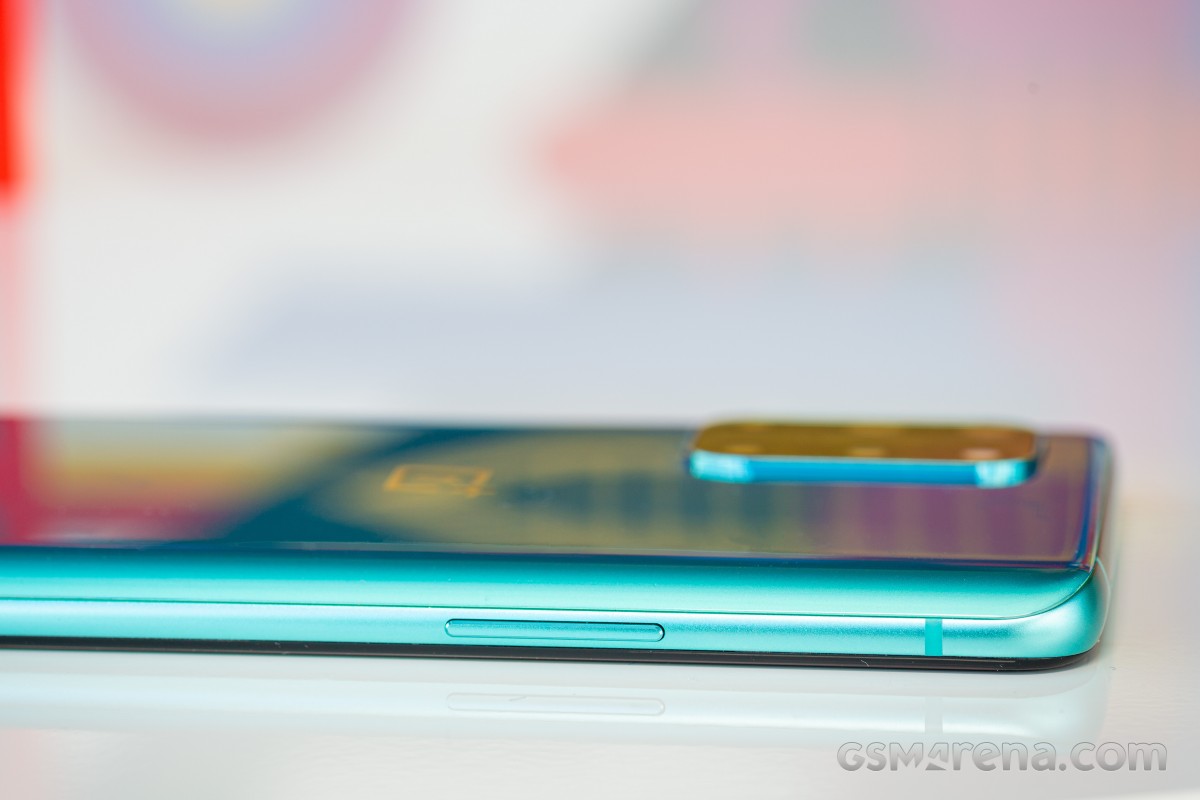 The top houses a lone mic, while the bottom is rather crowded with the dual-SIM tray, the bottom mic, the USB-C port, and the other stereo speaker. The OnePlus 8T is not officially water-resistant, not unless you get the T-Mobile's exclusive OnePlus 8T+ 5G - the only model that's IP68-rated for dust and water resistance. Still, the regular 8T seems to have similar, if not the same, rubber seals, and it should survive accidental drops in water. But neither of these 8T models is designed for underwater selfies, and water damage is not covered by the warranty. The purpose of the OnePlus 8T water protection is only against accidents and nothing else.

Handling the OnePlus 8T is a pleasant experience - it's not an oversized phone. It has a reasonable weight and not that slippery surface. Our Aquamarine Green unit has a glossy back, and yet we felt it secure enough in one hand even without the protective case. Fingerprints do stick on the back, and yet, even after three days without a single wiping, the rear panel was barely smudgy. 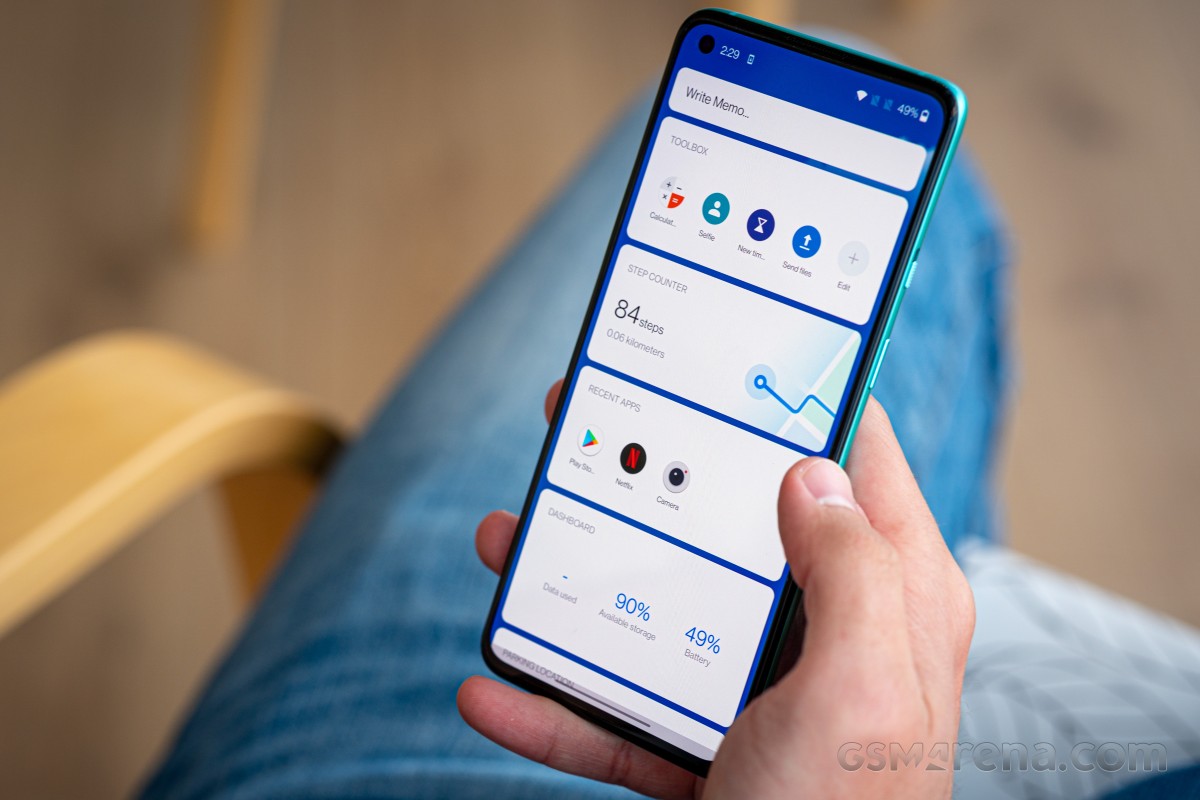 Long story short, the OnePlus 8T has a likable look, shape, and finish. It may not be officially rated as water-resistant, but it still gives you peace of mind with its sealed ports, and that's better than nothing.