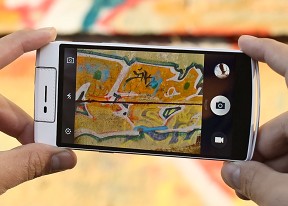 It's clear the Oppo N3 is more than just a robust cameraphone with a quirky motorized lens - it's Oppo's current flagship. The Oppo Find 7 may have something to say about that with its 5.5" QHD display, 3GB of RAM and stereo speakers but it can't compete on camera skills and doesn't feel half as premium.

The Oppo N3 isn't just another great deal from the East - it has flagship innards, premium looks and a matching price tag. At the moment the Oppo N3 will cost you a prettier penny than some true international droid flagships would. 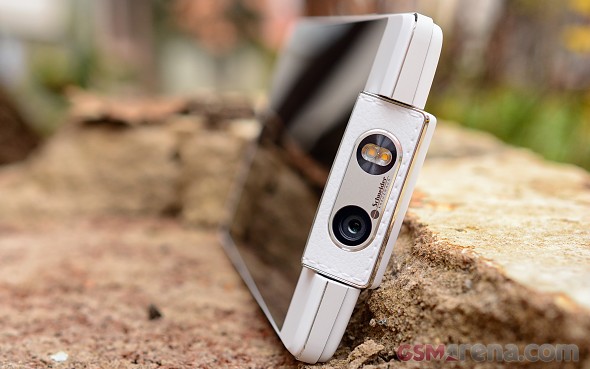 So what has the N3 done to deserve its hefty price tag? Well for one, it can stand up to most premium smartphones out there and not feel ashamed. Oppo has made one of the best-feeling smartphones ever - the soft, matte plastic and its perfect blend with the high-grade aluminum frame look and feel great, despite the fact that the Oppo N3 isn't the easiest 5.5" device to handle.

Here's the summary of all the things we've found during our run with it.

The software combines nicely with the hardware and you can move the motorized lens around for the right shot with either the touchscreen or the O-Click Bluetooth remote while panoramas seamlessly capture themselves and that's a first for the mobile world.

Video is not terrific but could get better if Oppo gets around to releasing an update that will enable 4K video. 1080p clips aren't too bad but don't strike us as anything special either.

If the camera is the piece de resistance, the trimmings aren't half bad either. The Snapdragon 801 doesn't command the same respect now that the Snapdragon 805 is around but it can still pack a formidable punch.

QHD screens may be on the rise but 1080p at around 400ppi is sharp enough in our eyes.

Currently the Oppo N3 is priced at $649. That's a relatively high price and puts the N3 at a disadvantage compared to its peers, especially the China-based ones.

The Meizu MX4 and MX4 Pro duo both cost less than the Oppo N3 and have a similar sized screens, 20.7MP Sony-made cameras and clever software with some neat gestures.

Oppo's own Find 7 is a cheaper than the N3 at the moment and ups the ante with the same display size but of a much higher 1440 x 2560px resolution, resulting in 534ppi of sharpness. The Find 7 also has 3GB of RAM but poorer battery performance. The Find 7a is almost the same beast but with a more conventional 1080p display resolution. It's cheaper and does 4K video out of the box.

A popular Chinese-made option is the OnePlus One. It's harder to purchase but it has most of the N3's hardware advancements, except the swivel camera, in a more compact, more customizable body. The OnePlus One offers a cleaner, stock Android CyanogenMod 11S software platform and costs almost twice as less compared to the Oppo N3.

Finally, we come to the LG G3, which also costs less at the moment. The G3 has the benefit of being available globally and it is featured in most walk-in stores with local warranties. You can also probably get the G3 for close to nothing on a carrier contract and it will offer you the same 5.5" screen diagonal but with a higher QHD resolution. It's camera doesn't rotate but can still capture nicely those all-important shots.

The Oppo N3 consistently performed very well throughout this review but it was not the best in any department. Still, it didn't let us down anywhere and we'll be happy to see it gain more market share than the N1, which hardly made it outside China.

There's little doubt a more competitive price will certainly help the N3 make the splash it deserves. As for Oppo, the company is trying to distance itself from the discounter image. They have been delivering quality and innovation consistently enough but users' expectations won't change overnight.