Retail box covers the basics, and then some

The Oppo R1x comes in rather plain packaging and the accessories are nothing out of the ordinary either. There's an AC adapter rated at 5V/2A with no support for VOOC charging though. There's a meter-long detachable USB cable for both charging and data connections. A headset with a single-button remote and a SIM ejector pin complete the list of essentials.

As far as extra items go, the phone has thin screen protectors pre-applied on both the front and rear, but there are no spares bundled. What you'll also find in the box is a frosted plastic bumper case to protect the back and the sides.

The Oppo R1x measures 140.6 x 70.1 x 6.8mm which means it's footprint is about average for a 5-incher. On the other hand, at 6.8mm it's pleasantly thin, on par with the Samsung Galaxy S6 and a fraction slimmer than the iPhone 6, both of which have protruding camera units, unlike the R1x. The R1x weighs 130g which puts in on the light side of the 5-inch crowd.

Style was obviously a top priority when Oppo went to the drawing board for the R1x. The designers did well and the device is certainly a looker. 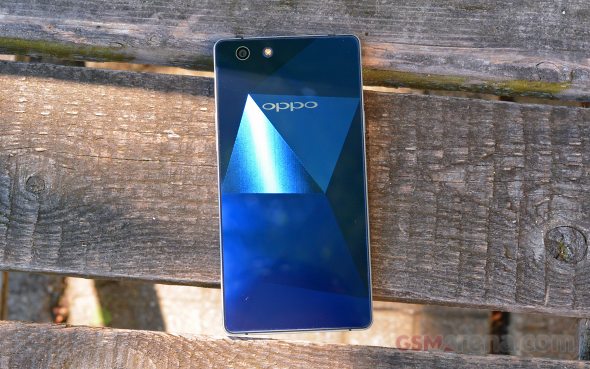 It's a sharp rectangular slab of a smartphone with the corners only slightly rounded. A matte metal frame lines the entire handset, with its own edges finely chamfered. The frame is interrupted in four places, one for the headphone jack, the other three dictated by either antenna or assembly considerations.

Nothing special on the front

The front is dominated by the 5-inch display, surrounded by adequately sized bezels. The lack of Gorilla Glass protection and the resulting pre-applied screen protector are somewhat questionable on a device which costs around $400.

It's the back that gets us all excited though, and that's because of its eye-catching triangular pattern. Oppo has employed some sort of UV treatment on the panel and has achieved a faceted sapphire-like appearance. The triangles reflect light differently depending on the angle. It's a very subtle effect indoors, but one you'll certainly appreciate outside.

The Oppo R1x has a straightforward set of controls, familiar from other company models. On the front you have dedicated Menu/Home/Back capacitive buttons in the bottom bezel. The top bezel houses the earpiece, flanked by the selfie camera and Proximity/Ambient light sensor assembly. The status LED is in the right corner.

The striking back is otherwise pretty bare. There's the 13MP camera module in the top left corner, joined by the single LED flash. The camera lens glass sits flush with the back panel, while the flash required a cutout, and an ever so slight ridge has resulted.

13MP camera on the back

The top of the device is home to a standard 3.5-inch headphone jack - at 6.8mm the R1x is thick enough to have one, unlike the 4.85mm R5, which came with a do-it-all micro-USB port. The secondary mic is on top too.

On the bottom you'll find the microUSB port in the middle with a speaker grille on each side. The left one is there for the sake of symmetry though, and there's an actual speaker only behind the right one.

3.5mm jack and second mic on top • microUSB and speaker grill on the bottom

There's nothing but a power button on the left side of the phone, while the volume rocker and card slot are on the right. The card tray is ejected with the supplied pin, and you can either load two SIM cards or a SIM and microSD. The tray goes in one-way only, but being symmetrical at first glance, you may not get it right every time. If it resists, don't force it, just flip it the other way around.

The R1x is pleasantly compact in your hand, largely due to the slim profile. However, the shiny surfaces of both the front and back aren't too grippy. That said, the sharp edges of the screen, together with the metal frame, still make up for a secure grasp of the phone.

Oppo R1x in the hand