The Oppo comes with a 13MP primary camera, which produces images with a 4:3 native ratio and resolution up to 4,160 x 3,120 pixels. The camera lens has a wide f2.0 aperture which would help when shooting with available light. 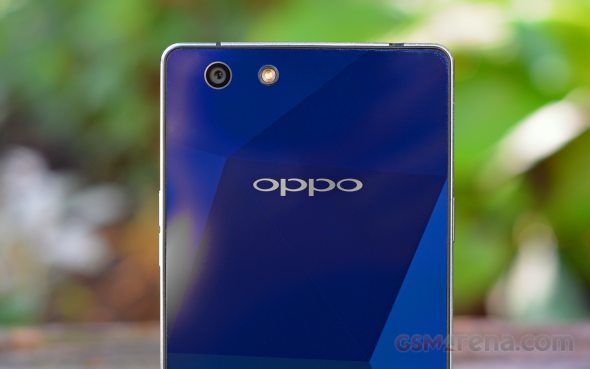 The interface is straightforward and combines stills shooting and video recording. The app is very rich in functionality too, with RAW shooting, slow shutter and after focus on top of the usual HDR and panorama modes. The modes can be disabled so that only those relevant to you are displayed in the shortcuts.

A so called UltraHD mode extrapolates the sensor data to output 25MP images. There's also an Expert mode, which allows for manual focusing, white balance preset selection as well as advanced control over exposure. There's manual shutter speed up to 16 seconds, ISO selection up to ISO1600 and -2/+2EV exposure compensation in third-stop increments.

The image output of the Oppo R1x is very good with a lot of detail in high-contrast areas across the frame with only the slightest softness in the extreme corners. Dynamic range is about average for a smartphone, and the fifth sample clearly shows it's limitations in the foliage, rendered almost a complete black.

Some may call the colors dull, but we'll use the word undersaturated. While that's not a bad thing all in itself, some users may prefer a more vivid reproduction. It's true that it could be achieved in post-production, and the mere existence of RAW mode suggests a more advanced target audience, a simple slider would have been nice for the less initiated.

Exposure is consistent, there is no difference between consecutive shots of the same scene shot several times over the course of a few seconds. The Oppo R1x is also quick to acquire focus and it does so accurately most of the time.

Overall the app is also very snappy, provided you stick to the regular modes and not shoot RAW or Ultra HD all the time, but even then it doesn't really get in the way of taking the next shot.

We grabbed a few shots in the Ultra HD mode which should come in handy when aiming for large prints. More mature processing will always be available on your computer, but for time-pressing situations it produces usable 25MP photos.

The HDR mode in not among the best we've seen. While it does bring out the shadows a bit, it also introduces a strong purplish tint on the images. Some fine detail is lost too, for example in the balcony railings and the foliage in the mountain. That said, it is a marked improvement over the Oppo R5, which applied very extreme processing to its HDR photos.

In normal mode the R1x can get very close to the subject and shoot some pretty nice macro shots. If that's not enough, there's the Super macro mode, which fills the frame with even more of the subject.

The Panorama mode does a decent job and generates images with even exposure, though there are the occasional stitching artefacts. The level of detail is also not on par with the regular photos, but satisfactory for the purpose. The software limits the sector, which can be captured, to less than 180°, though.

The front camera employs a 5MP sensor behind an f2.0 lens and images come out at 2,560 x 1,920 pixels. It has the mandatory beautification feature, which provides a ton of filters and irons out skin imperfections. It creates images with plenty of detail across the frame, all the way up to the extreme corners.

Be sure to check out how the Oppo R1x compares to its rivals in lab shots, using our photo compare tool.

The camcorder on the Oppo R1x is capped at 1080p/30fps. It does have a slow motion mode, but it's limited to 480p and is barely usable, so we left it out.

That's not to say that the regular output is any good, though. Gone is the detail from the still images and the output could pass for an OK 720p video, at best. The limitations in dynamic range are even more pronounced, and colors are similarly tuned down as in the photos.

On a more positive note, the focusing mechanism is calm and doesn't try to find changes where there are none. However, the initial scanning of the entire focusing range upon hitting the record button is very irritating.

Additionally, the video compare tool provides you with an option to see how the Oppo R1x fares in the controlled environment of our studio.