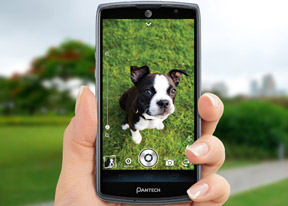 Launched during AT&T's developer conference at CES 2013, the Pantech Discover is the company's most capable Android smartphone to hit the United States yet. The LTE handset follows the same formula as its two predecessors, the Pantech Burst and the Pantech Flex championed over the last year. It consists of offering top shelf specs for entry-level money.

With Qualcomm Snapdragon S4 chipset featuring two 1.5GHz Krait CPU cores, 4.8" HD display and 16GB of built-in, further expandable memory on board, it is not difficult to mistake the Pantech Discover for the US version of the Samsung Galaxy S III. Heck, one can even argue that the Pantech is a more enticing offering as it one-ups the Samsung royalty with a 12.6MP camera and a pair of 3D surround sound speakers on board.

After taking a closer look at the list of features which the Pantech Discover has to offer, there's little doubt that the device has plenty to offer, especially considering its price range. The 12.6MP camera and stereo speakers are impressive even by today's flagship standards. As for the dual-core chipset and 720p screen - it was only a couple of months ago when they were still the best available combination on the US market.

As far as the device's negatives go, we were mostly puzzled by the lack Android 4.1 Jelly Bean out of the box, now that Jelly Bean has been out for more than six months. As for the slow camera performance, hopefully the image quality will make up for the extra wait between shots.

So, is the Pantech Discover a budget Android smartphone hero? Its specs certainly point this way, so we are curious to find out. As always, we are going to kick the review off with an unboxing, followed by a design and build quality inspection.

Editorial: You might notice that this review is shorter than usual and doesn't include some of our proprietary tests. The reason is it has been prepared and written far away from our office and test lab. Still, we think we've captured the essence of the phone in the same precise, informative and detailed way that's become our trademark. Enjoy the good read!

heyy! pliz can u post a review about the Pantech Flex please

I was a little skeptical about this phone. I had never had a Pantech. But, I am glad I got it. Great phone!