Above the display, you will find the earpiece, the front-facing camera, as well as the device's ambient light and the proximity sensors. A notification light and Verizon Wireless logo keep them company.

Below the display are the three Windows Phone navigation buttons. There are no surprises here.

The sides of the Samsung Ativ SE

The top of the devices accommodates the 3.5mm audio jack, a secondary microphone for active noise cancellation, and an IR blaster.

The top of the handset looks familiar

The microUSB port and the mouthpiece are located on the bottom of the handset. There is nothing else there.

The bottom of the Samsung Ativ SE

The back of the smartphone shows, once again, a familiar setup. The 13MP camera sits on the top with the single LED flash below it. The speaker sits on the bottom. A Samsung and Verizon 4G LTE logo complete the setup.

The back of the phone

Removing the thin battery cover reveals the 2,600mAh battery, the SIM slot, and the microSD card slot. The latter will be a welcome sight for all multimedia hoarders considering the phone.

The microSD card is hot-swappable too. You don't need to remove the battery to gain access to it.

The Samsung Ativ SE is powered by removable 2,600mAh battery. It propelled the Windows Phone device to the respectable endurance rating of 60 hours in our battery test. 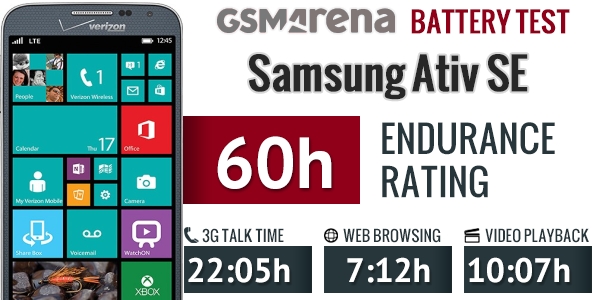 The smartphone posted a stellar standby result. Video playback and telephony endurance times came out impressive too. Web browsing on the other hand, didn't blow us away.

Dual-band Wi-Fi 802.11 a/b/g/n/ac, Bluetooth, NFC, and microUSB 2.0 port with mass storage mode are also on board. An IR blaster is present too, along with a dedicated app which we will cover a little later in the review.