The Galaxy Alpha marks a new beginning for Samsung, which HTC may view as trespassing on their premium territory. Samsung may have found a weakness - HTC have a proper full-size flagship but their compact offering feels like a midranger at times.

The Samsung Galaxy Alpha has more devices to worry about, the high-profile targets being the Apple iPhone 6 and the Sony Xperia Z3 Compact. The HTC One mini 2 is cheaper than all three and the iPhone is the only one matching its metal unibody. 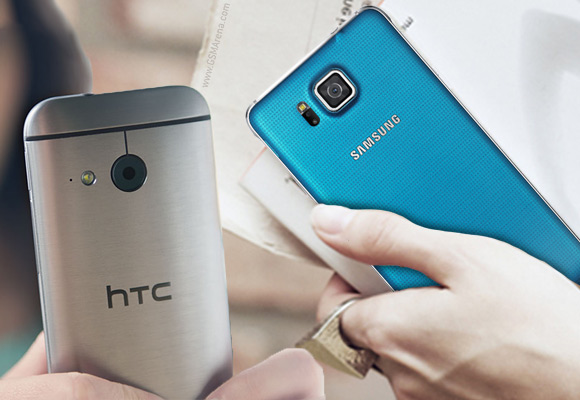 The HTC workmanship didn't go unnoticed, we gave the One mini 2 high praise despite being a bit too big for its screen size. That's partly down to the BoomSound speakers, of course, which are excellent, as is the audio quality in general. With a microSD card slot the HTC can also carry more music on board.

The Samsung Galaxy Alpha wins the performance competition by a country mile, which also allowed it to handle more demanding video - both in terms of resolution and framerate. The still camera also had an advantage in quality, though HTC recovered from the disappointment of the Duo Camera on the One (M8).

The Galaxy Alpha offers more screen real estate though HTC didn't skimp on the One mini 2 screen either. One area where the Super AMOLED display had a clear advantage was sunlight legibility.

Despite nearly equal screen brightness and a huge lead in performance, the Samsung phone actually offered better battery life. Not by much if you go by the Endurance rating alone but the small battery managed impressive feats in the individual tests.

In terms of software and additional features, the Galaxy Alpha matches its parent company's usual attitude of more is better. It has an almost complete copy of the Galaxy S5 software pack including the security features involving the fingerprint scanner, and the heart rate sensor.

HTC dropped some features from the One mini 2 compared to its big sibling which, along with the duly reduced processing speed, is more becoming of a midrange device than a flagship.

Again, the compact offering from HTC is cheaper than its Samsung opponent (funny, it's usually the opposite). Sure, it could have been closer to the One (M8) in certain respects but the premium feel isn't one of them.

The Samsung Galaxy Alpha couldn't pull off a metal unibody but the metal frame design is shared by Nokia and Sony so it's in good company. The compact device is a beast in performance and lasts longer than you'd guess going by its nominal battery capacity. It has an excellent camera too, our biggest complaint about the device overall is that it omitted the waterproofing.

As we said early on, techies are more forgiving of imperfect design while others value build quality above raw chipset performance. That - and budget - will be the dividing line between those who buy a Samsung Galaxy Alpha and those who go for the HTC One mini 2.