Samsung has so many devices that it's creating sub-brands for its brands. The "Core" line houses entry-level devices aimed at the mass markets in developing countries, slotting under the larger "Grand" devices. Now there's "Prime," which, based on deduction, should mean for now a 64-bit Snapdragon 410 chipset and a better camera.

The latter was very true for the Galaxy Grand Prime, the 5MP/1080p selfie camera impressed. The same can't be said about the Galaxy Core Prime as it misses the mark on the pricing - specs are suited for an entry-level device, but the price tag puts it in competition with more capable devices.

The screen was easily the biggest disappointment. Its low contrast ratio will stare back at you every single time you use the device. Not having an HD resolution is forgivable (especially with good viewing angles), but the image quality is below what cheaper devices offer. 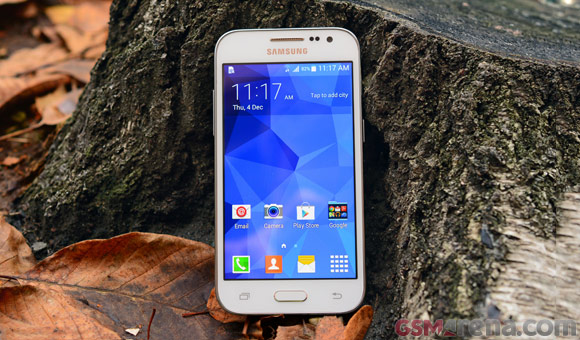 The Snapdragon 410 chipset does a good job of running the software and while we're glad Samsung trimmed the fat off TouchWiz (to leave more room in the 8GB of built-in storage), we do wish it had kept some of the positive changes - like the excellent proprietary music player or the performance tuned web browser.

The camera does a solid job of video recording (as long as you remember to disable the continuous autofocus), but it could have done a better job for stills. It lacks HDR and there isn't even a fun mode like animated GIFs as a consolation prize.

The optional LTE might pull the Samsung Galaxy Core Prime ahead of some of its competition, but if you're looking at a budget device you're probably not paying for a solid enough data plan to make tethering worthwhile. And we're not 100% sure why we'd want LTE on an 800 x 480px screen with a slow(ish) web browser. The optional dual-SIM sounds much more useful.

An HTC Desire 310 can be had in a dual-SIM configuration if needed and it shoots 1080p video with its 5MP camera. It's running an older version of Android (4.2 Jelly Bean) and its update fate is uncertain.

If that's a bit too big for you, the Samsung Galaxy Ace Style LTE is fairly compact with its 4.3" screen. It's a Super AMOLED screen to boot. The phone uses the same chipset as the Core Prime and has a 5MP/720p camera. The only real downside is the measly internal storage of 4 gigs.

Xiaomi has quickly become China's largest smartphone maker and its highly popular Redmi 1S (aka Hongmi 1S) is a steal for what it offers. It has a 4.7" 720p IPS display and an 8MP/1080p main camera. Even the selfie camera is good at 1.6MP/720p.

It's powered Cortex-A7 chipset at a higher clock speed so performance is better in certain tasks (like browsing), but you're getting a highly customized Android 4.3 with MIUI 5.0 on top, which may not be your thing.

The Samsung Galaxy Core Prime gets some things right, but pricing is not one of them. We're sure that the price is bound to drop under the pressure from similarly-priced or even cheaper devices that offer a solid experience. Once the price has evened out with the competition though, the Core Prime will make a fine daily driver (even if it doesn't have the best screen of the bunch).