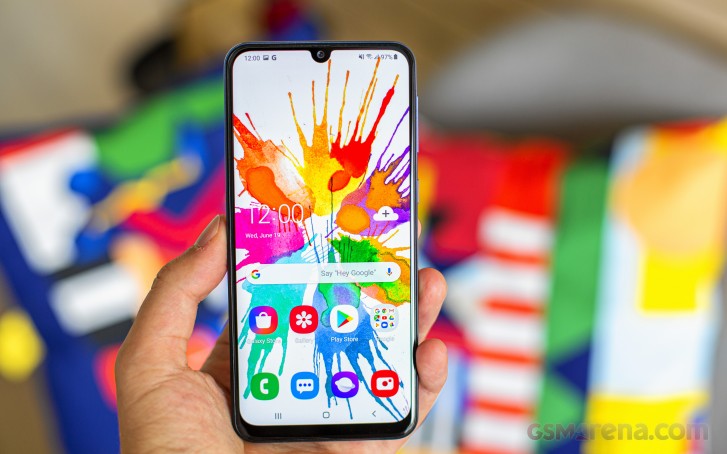 In our brightness testing, the M30 posted fairly typical Super AMOLED numbers. Operating the slider manually, we got 437nits which got a healthy boost to 641nits in auto under bright light. Since there's no ambient light sensor per se, we gather the M30 uses its front facing camera for the purposes of judging ambient light conditions. Sunlight legibility is very good, but only if you make sure to wipe the smudges off the screen, which otherwise get in the way.

Unlike Samsung's latest flagships, which adopt a Vivid/Neutral selection of display color modes, the M40 still has the previous implementation with Adaptive, AMOLED Cinema, AMOLED Photo, and Basic modes. The out-of-the-box Adaptive mode returned an average deltaE of 2.8 and a maximum of 8.9 when examining color swatches against DCI-P3 targets. It's the Cinema preset that's meant to cater to P3 content and we got the same respectable average deltaE of 2.8, but a lower maximum of 5.2. The Photo mode is tuned for AdobeRGB reproduction (average deltaE 2.9, max 4.9), while the Basic preset gets you accurate sRGB representation (average deltaE 1.7, max 2.8).

It's worth noting than in all the dedicated modes the whites remain very accurate with a deltaE below 2, which is quite remarkable. Even Adaptive had a more than decent white reproduction with a deltaE of around 3.

The Galaxy M30 relies on the same 5,000mAh battery as the M20 and that's a lot of battery. The M20 was quite the marathon runner and with the generally more efficient Super AMOLED display of the M30, we expected even better results. Which is what we got.

The Galaxy M30 lasted 15 full hours on our web browsing script vs. the M20's already pretty good 13:20h. More impressive was the nearly 19-hour result of the M30 when looping our test video - OLEDs do tend to ace that test. We clocked about the same 32 hours of voice calls and the standby draw was largely similar too.

Feeding these numbers into our formula we got an Endurance rating of 119 hours for the Galaxy M30. 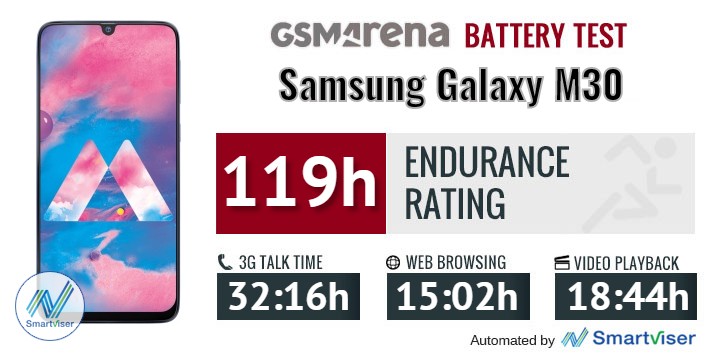 Our battery tests were automated thanks to SmartViser, using its viSerDevice app. The endurance rating above denotes how long a single battery charge will last you if you use the Samsung Galaxy A80 for an hour each of telephony, web browsing, and video playback daily. We've established this usage pattern so that our battery results are comparable across devices in the most common day-to-day tasks. The battery testing procedure is described in detail in case you're interested in the nitty-gritty. You can check out our complete battery test table, where you can see how all of the smartphones we've tested will compare under your own typical use.

The Galaxy M30 gets fully charged in 2:24h from flat, with some 24% at the half-hour mark. Oddly, the M20 required just 2 hours when we tested it with the same adaptor. Looking at the M30's charts, we saw that the charging speed tapers off past the 90% mark, while there was no such thing on the M20. Oh well, 2:24 for a 5,000mAh battery is still pretty decent.

The Galaxy M30 has a single down-firing loudspeaker on the bottom, just like the M20. These Ms are a relatively quiet bunch, with both the M30 and M20 placing in the 'Average' category in our three-pronged test. Sound quality is decent, as in there is no distortion at full volume, but then it's not very high volume, and there's little boom in the low register.

The Samsung Galaxy M30 did well in the active external amplifier part of our test, posting scores as good as we've come to expect from smartphones these days and maintaining above average loudness.

The volume remained good for the class with headphones, but the output lost some of its accuracy. A bit of intermodulation distortion and a slight nervousness to the frequency response appeared along with an average sized hike in stereo crosstalk. A competent performance by all means, but not one to earn the Galaxy M30 a lot of extra points.