The Samsung Galaxy Note8 runs on Android 7.1.1 Nougat - that's 0.1.1 more than your regular S8s and S8 Pluses. The version of the Samsung User Experience UI, which is running on top of Android is also a couple of notches up - 8.5 vs. 8.1. That, however, you'll hardly notice, but the S-Pen you will, so let's start with it.

You can use it without waking the phone up - click the top end of the S-Pen to pull it out of its silo, and you're straight into Screen-off memo - as in you can write on the otherwise off display, white on black. That feature was introduced on the Note5 and back on the Note7 it came with a twist - you could pin a note on the AOD. 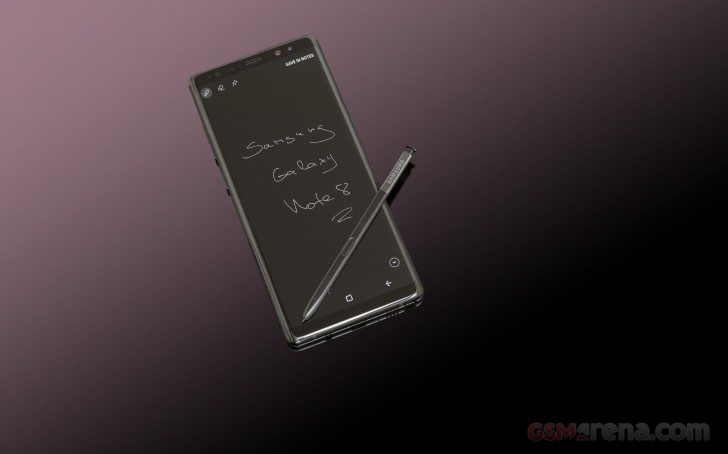 Same here, though Samsung advertised you could pin up to 100 pages of notes on the display. Challenge accepted.

We made it to 120, and it pinned just fine, though it could be down to the fact that it was merely 120 pages of writing the count in the lower right corner - heavier notes could hit the cap sooner, for all we know. The point is, you can pin a long, long grocery list with no issues (or your next rap lyrics or whatever). You can also just save it to Samsung Notes, where the pinned one will eventually go to once you pin a new one.

Samsung Notes is your go-to place for scribbling stuff. Your notes are listed chronologically, or arranged in collections (there's one by default for the screen-off memos), and you can see an expanded preview if you hover over a note with the S-Pen. Each note can contain typed text, written text, doodles, images and voice recordings.

Samsung Notes: All  Collections  Preview  Brush settings  Everything in a note (okay, minus an image)

It's one of many ways to use the S-Pen, though. When you pull out the stylus with the phone unlocked, the Air command menu appears (though that's a setting that can be turned off, or set to create a note straight away). You can have up to 10 shortcuts there, and those can be either S-Pen features or shortcuts to apps. You can't just put a contact there, that's for the Edge panels, though it's hardly practical to pull out the S-Pen to call someone.

Advanced screenshot capture is made infinitely easier by the pen. Smart select allows you to take differently shaped screenshots, extract text from them, or pin them on the screen.

Alternatively, you can create short GIF animations. Then there's Screen write that takes a fullscreen snap that you can write on with the full set of different pens and brushes (and then crop, if you will).

Live message is one of the key additions this year, though. Since still sketches are too mainstream, you can record a GIF animation of your act of drawing, so that the other party can feel extra special by watching the message unravel before their eyes. There's even a coloring book with a ton of drawing outlines for you to fill in and share (or not). If you're a better artist than that, you can go ahead and draw your artwork and share it on the Penup network.

There's a magnifier too with a number of different magnification ratios. Meanwhile, Glance lets you have a tiny thumb of an app on the bottom of the screen, which you hover to evoke the full-size app. Translate does just that - it uses Google translate to give you quick translations when you point at a word. There's a toggle that switches between single-word translations and translating a block of text.

There's also Bixby vision for the S-Pen. You point at an object on the screen, and Bixby does its magic of selecting what it thinks you're trying to select and then gives you the option to either look for similar images or do actions with the text if there is any. As you've probably gathered already, a lot of the features are doubled here and there.

There are numerous other smaller use cases for the S-Pen. For, example, you can hover over an image in the gallery for an enlarged preview, or over a calendar entry for more details. You can also scroll up and down by hovering the S-Pen over the edge of the screen.

Also, if you prefer writing input for form filling, you can set up a tooltip to appear when you hover above a field. Tap on that, and you'll go into writing mode.

Since we're doing the feature presentation in this review in an unusual sequence anyway, let's get the Edge panels out the way too. They've been a staple of Samsung flagships since there have been curved-screen Galaxies, and years later we're still not entirely sure of their usability.

As you're probably well aware, the Edge panels are panes of tools and shortcuts that you bring up from the side of the phone by pulling on a handle. The handle (and consequently the panels) can be on either side of the display, and you can set up its size, vertical position and opacity.

The available panels include Apps edge (pre-configured app shortcuts), People edge (pre-configured contact shortcuts), Tasks edge (various shortcuts, e.g., Take a selfie or Create event), while Device maintenance is your one-stop shop for checking storage, memory and battery modes. Smart select allows you to take screenshots of a crop of the screen, doing text recognition or keeping an image pinned to the top. You can deactivate Edge panels if you don't want and enable others (including downloading additional panels).

The third and final Edge screen feature is Edge lighting. It's a prettier, easier to notice variety of a notification light. It works when the Note8 is face down and uses the sides of the screen to create a colorful aura around the phone. We'll admit that leaving an expensive phone like this one face down feels cringe inducing, hence we never gave that feature much use.

App pair is one of the newly introduced productivity features. For apps you usually use together you can create shortcuts that launch them both in a pre-set arrangement. Think watching a YouTube video while shopping for the stuff in it (#consumerism), or dragging and dropping files between two separate instances of the file manager.