So there you go - time to draw the line and see how the hot favorite for the phablet throne this season did. It was a wild ride, but as it turns out, summing it up is far easier than we expected. Let's start with the key findings from our review.

The Galaxy Note 4 impressed us with its look and feel, and flexed some hardware muscle while at it. The 16MP OIS camera didn't disappoint either - to say the least. The battery life was pretty awesome too, while the user interface has been nicely polished and stripped off of a lot of clutter. 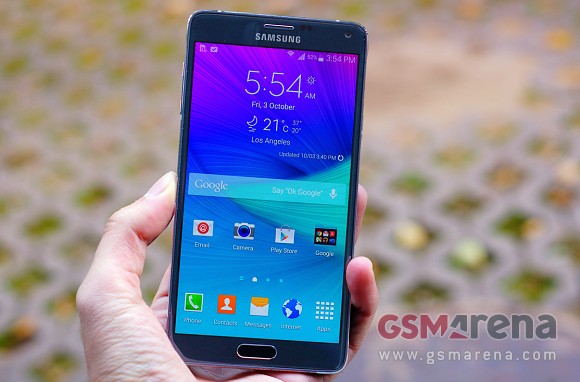 The heart-rate and blood oxygen sensors will always have limited use but, as the S Health app improves, they'll be getting closer to realizing their full potential. The fingerprint sensor is also a welcome addition over the Galaxy Note 3 for those who would want a little extra security without having to type long passwords.

We particularly like the new S Pen features and the improved multi-tasking, which extend the Galaxy Note 4's advantage in terms of productivity. Indeed, there's no other smartphone in the market that can quite match the latest Samsung phablet as a productivity tool.

But, as we said in the beginning, a flagship risks being remembered for its failings rather than its achievements. We didn't quite find any of the Galaxy Note 4 shortcomings bad enough to potentially go viral in the wrong way.

We would have appreciated water resistance, we don't really like the step back from microUSB 3.0 to 2.0 and the user interface, while certainly headed in the right direction, still requires an update or two to become completely consistent, but we don't think any of this is a deal-breaker.

Stereo speakers are another item on our wish list, but maybe that would have pushed the dimensions beyond the point of reasonable. Finally, we really hope, as production catches up to the demand, that Samsung takes care of the gap around the screen and give the stellar design the flawless build quality it deserves.

What matters at the end though is how the Galaxy Note 4 compares to its peers - the ones it will be fighting for the affection of the customers.

The Apple iPhone 6 Plus is naturally the first name that springs to mind, although Cupertino's long overdue move to phablets is probably the bigger story than the device itself. Anyway, Apple's first phablet has an excellent screen, a properly powerful chipset and cool design with an impressively slim 7.1mm profile.

However it can't quite match the QHD AMOLED panel's brilliance and its camera, while also featuring OIS, lags behind in both stills and video resolution. The bezels of the iPhone 6 Plus are also way too big, making it larger than the Galaxy Note 4 and it has no microSD card slot, basically forcing you to get the €900 64GB version. Even in the realm of premium gadgets that's a lot of money - a splash that's really hard to justify unless you are already very deeply invested in the iOS ecosystem.

Back to Android where, somewhat surprisingly, the closest rival comes from Huawei. The fresh Ascend Mate7 fits a 6" screen in the same footprint as the 5.7" Galaxy Note 4, but sticks to the 1080p resolution. The fingerprint implementation on the Huawei flagship is better than anything else on the market right now and its launch price is €100 lower making it pretty good value for money.

If the best is what you are after though, the Galaxy Note 4 clearly comes out the favorite with its superior camera, more feature-rich UI and more impressive screen.

Another name you probably wouldn't expect to hear next to the Galaxy Note 4 is Lenovo and yet the Vibe Z2 Pro is ready to match the Samsung flagship on resolution and 16MP OIS camera. The offering by the Chinese giant comes short in terms of processing power though and has no fingerprint sensor or microSD card, not to mention that it's hard to find in most markets.

Again, the Vibe Z2 Pro might offer superior value depending on where you are, but can't quite match the complete package that is the Galaxy Note 4.

LG doesn't have a direct rival to the Galaxy Note 4, but the G3 flagship comes with a 0.2" smaller screen, while still offering all the QHD resolution and an optically stabilized 13MP camera with laser-assisted auto focus.

The key strengths of the LG smartphone over the Note 4 are its impossibly slim bezels and its very attractive price (at €399 it's €200 cheaper than the Samsung phablet). The G3 can't hold a candle to Galaxy Note 4's battery life and comes short in a few other departments, but is certainly an interesting option for those that can't reach as high as the latest Samsung phablet.

Finally, an exotic alternative was provided by Samsung itself - the Galaxy Note Edge that debuted alongside the Note 4 at the IFA floor. The signature curved screen on one of its edges means this one had to extend its footprint further, but it enables some pretty cool features. The problem here (outside of the slightly harder handling) is in the premium price Samsung is charging for what it calls a "Limited Edition Concept" - which by the way comes with a duly limited availability .

We can't in good conscience say that the premium is worth it before we have given the Note Edge a proper test, but even if it is, you'll have to wait for at least a few more weeks before you are able to get it.

The Samsung Galaxy Note 4 looks like a favorite in all those battles without even having to reach for one of its key weapons. The S Pen, which the competition has yet to find an answer to, may be seen as a needless add-on by some Galaxy Note 4 owners, but in certain scenarios it can make a huge difference and seal the deal on its own. Just like the Galaxy Note lineup itself, the S Pen rose from a ridiculed object to a raging success and now provides some much need comfort for Samsung - it's not enough to match the Galaxy Note 4, you have to comprehensively beat it.

That's that then - the heir to the phablet throne is here and it looks like there's no stopping it from taking its rightful place. Samsung really needs a strong flagship lineup for the upcoming holiday season if it is to recover from the slight dip over the past few months and we can't think of a better device than the Galaxy Note 4 to rally the troops.