Comparing photos of different resolution can be hard, so we turned to our Photo Compare Tool. We chose to look at both photos at 8MP resolution (so, the Galaxy R photo was upscaled and the Optimus 2X photo was left untouched). This way the resolution superiority of a higher megapixel camera would be easier to spot and measure.

You can use the tool too, via those links. Also, we've prepared custom crops that focus on the key areas of the chart.

Let's start with synthetic resolution, the first chart we have. It will set the ceiling of the resolution we can expect.

Looking at the horizontal resolution, the two come surprisingly close. In vertical resolution, however, the Optimus 2X has a clear advantage. It's not big - if you look at the third phone, which we used as a yardstick (the iPhone 4S), you can see there are 8MP cameras that perform much better.

Still, it's a win for the Optimus 2X, though not by a large margin. The downscaled images of both photos reveal a slight pink spot in the Galaxy R photo. 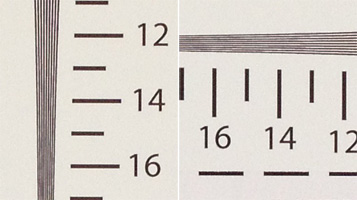 The second chart shows a difference in processing. The LG Optimus 2X photos are a lot grainier (but no color noise), and that's because the Samsung Galaxy R sacrifices more fine detail.

The color patches show more saturated colors in the Optimus 2X, but they are actually closer (if a little oversaturated) to the colors on the chart than the duller colors of the Galaxy R photo. 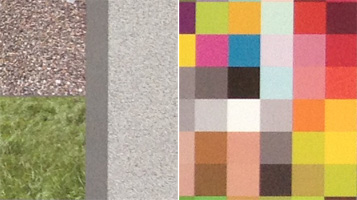 The third chart shows natural objects and while the Galaxy R offers a respectable quality, the Optimus 2X packs more fine detail in its photos. This chart is shot under artificial lighting and it's a good tell of faulty white balance - the R is spot on, but the 2X has a very strong blue tint. 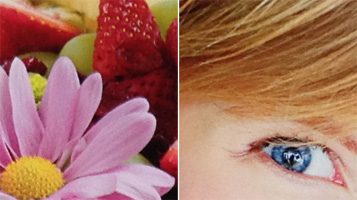 Summing it up, the Optimus 2X has the upper hand in still imaging in almost all scenarios except under artifical lighting where the white balance is a hit and miss.

Because of the big difference in resolution, we'll be using our Video Compare Tool setup. The LG Optimus 2X and its FullHD videos offer double the resolution that the Samsung Galaxy R manages. For the yardstick, we'll use the Nokia Lumia 800 this time - an excellent 720p shooter - to show that resolution and captured detail aren't always the same thing.

Let's start with the synthetic resolution chart again (it's the third image in the Tool). The Optimus 2X has a very clear advantage when it comes to horizontal resolution, but the advantage in vertical resolution isn't as clear cut. The 720p footage of the Lumia 800, however, shows a sharper image than either of those, despite the upscaling to 1080p. 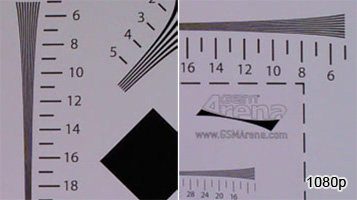 Let's go to the more realistic setup. Under good light, the LG Optimus 2X has a clear advantage in detail (notice the grass and the flooring, as well as the small type). Color rendering is also more accurate, but there's the familiar bluish tint from artificial lighting.

The Galaxy R keeps almost none of the fine detail due to heavy compression. Even the relatively large "RIDE THE" label is nearly illegible. The Lumia 800 again shows that lower resolution doesn't necessarily mean lower quality. 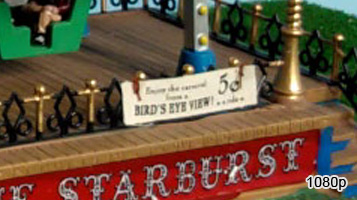 In poor lighting, the LG Optimus 2X maintains its advantage over the Galaxy R in resolved detail and color accuracy. 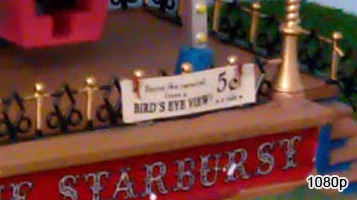 We decided to put the Optimus 2X in 720p mode and see if there's any change in the performance. The viewing angle is wider in this mode (a nice option to have since you can, say, fit more people in the shot), the 2X still had an advantage in resolution. 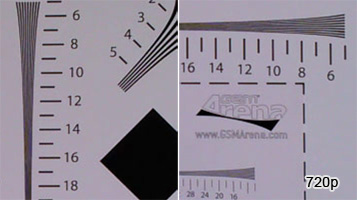 The difference in viewing angles is pretty obvious in our ferris wheel setup. Even though it was on equal footing in terms of resolution and having a narrower viewing angle (which makes it easier to capture fine detail), the Galaxy R still lost (check the "RIDE THE" sign again). 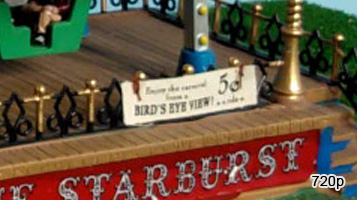 Dropping the resolution to 720p didn't improve the low-light performance of the LG Optimus 2X, but it managed to keep a marginal lead on the Galaxy R. 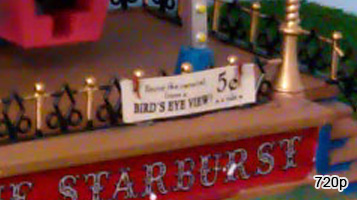 You can look at the full frames that were used to make the crops too:

The Samsung Galaxy R has an annoying issue - there's no autofocus in video recording - you can't focus on your subject prior to recording and continuous auto-focus is not availble during recording. It also records mono sound, but at least it hits a smooth 30fps framerate.

The framerate of the LG Optimus 2X videos hovers a little under 24fps in 1080p mode and there's slight choppiness noticeable. It does do 30fps 720p mode though. It records stereo sound with the videos and autofocus works correctly.

To sum the video recording section, the Opimus 2X is a clear winner between the two, however the comparison to the Nokia Lumia 800 clearly shows 1080p is not always better than 720p in terms of resolved detail.