The fingerprint sensor had to go somewhere, so it's been relocated to the back. And boy is it an odd location. It's not placed along the central axis, so it favors right-handed operation - it's more natural to reach out with your finger diagonally across the back than on the same side. Of course, there are vastly more righties than lefties in the world, but here's one righty that uses his phone mostly with the left hand. 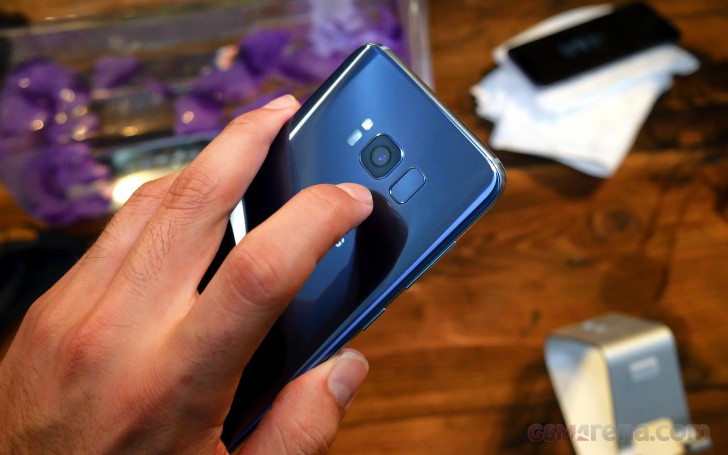 Then there's the matter of smudging your camera, when feeling your way to that sensor. The camera is even less raised now (otherwise a good thing), which makes the hunt for the sensor that one bit more likely to result in tapping on the lens.

You won't necessarily need to do it all that often, as the S8 and S8+ come with the Note7's iris recognition tech. Once you get used to it, it could make the fingerprint sensor redundant for the mundane task of unlocking, and only remain to be used for Samsung Pay or other app-related security features. Not that you couldn't use your eyes for the former, as well.

To read your irises Samsung has fitted a dedicated camera, making the cameras on the front officially two (the 8MP selfie camera being the other one). That makes for a pretty crammed top bezel, which also needs to house the earpiece, the ambient light and proximity sensors, a notification LED, and the IR illuminator that enables the iris scanning to work in the dark. Good thing then that all S8s regardless of back color will sport black faceplates - imagine the Swiss cheese that bezel would have been if it matched the body paint job, all dotted with sensor cutouts. 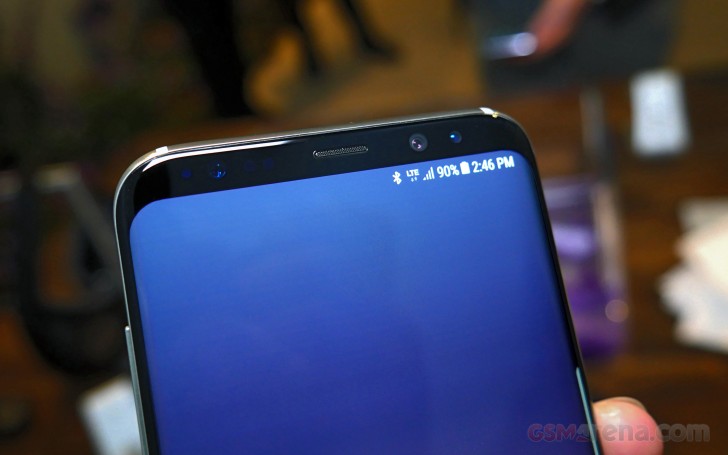 There's nothing below the display, not even a logo - some folks hate the Samsung badge on the front, so they should be happy. The others won't bat an eyelid, we gather.

Believe it or not, a lot of what's different about the S8 compared to last generation is on the frame. And the frame itself, for that matter. Where the S7's was matte, this generation gets a shiny polished treatment. While the impact on aesthetics is debatable (we're not ones for too much bling), what should be pretty universal is the dings and scratches this new finish will inevitably accumulate over time. We'd be happy to be proven wrong, but...

So a shiny finish, that's it? No. The Bixby virtual assistant gets a dedicated button on the left side of the phone, right underneath the volume rocker.

On the bottom of both phones you'll find a 3.5mm headphone jack - thank you, common sense. Early rumors had it removed from the Galaxy S8, but there - it turns out they could find the space. There's a USB-C port in here too - Samsung took the plunge into the already widely adopted standard with the Note7, and we figure it's going to stick with it from now on.

The loudspeaker is down below, still a single one, which would inevitably force those of us with a YouTube binge-watching habit to reach for the headphones more often than not.

The Galaxy S8 and S8+ still carry the same IP68 rating for dust and water resistance as the S7 duo. We're happy that ingress protection is becoming the norm in the high-end segment - when you're paying top dollar, it's good to know that your phone can survive the occasional (of course, accidental) skinny dipping. Samsung doesn't say anything about salt water, though - LG insists the G6 is seawater safe.

The weather sealing hasn't resulted in unnecessary thickness either. On the contrary, the phones feel spectacularly thin. The curved display and rear panel certainly help in this respect - the sides of the frame are only a fraction of what the calipers show when measuring the phone in the center.

It's also not the easiest to pick up off a table. That's been a key complaint about the S7 edge's design, though admittedly the Note7 was better in this respect and so are the new S8s, so that's partially resolved. That said, the meatier sides of the G6 are hard to beat.