Gallery on an amazing screen

The Pictures hub is the photo gallery of Windows Phone 7. When you start it, it shows the most recent photos (including those from the camera), What’s new (which shows photos from online services) and a menu, which lets you view all photos, photos sorted by date and the favorite photos.

Viewing an individual photo supports pinch zooming and you can easily upload the photo to Facebook or share it on some other service. And as with the Samsung Galaxy S, the SuperAMOLED screen makes photos really pop.

The music and video players are simple and have straightforward interfaces. You won’t have any difficulties using them. However there are some things missing – like equalizers. Another missing feature is the ability to scrub through a song with your finger – you have to press and hold on the FF/rewind buttons to simply jump back and forth.

It’s interesting that you can pin individual items to the homescreen – like a song or video, even an FM radio frequency.

The players can of course work in the background with a nice shortcut – when you press a volume key, the name of the currently playing track also appears along with play/pause, next and previous buttons (they can also scrub through the song).

The video player doesn’t recognize .AVI files – in other words, don’t expect DivX or XviD support. However, the Zune software on your computer will automatically convert such files to .MP4 – so, you can watch those formats on the Omnia 7, it’s just that the transfer to the device can take quite a while (depending on your computer configuration).

Here's a video demo of the Pictures and the Music&Videos hubs:

The Samsung Omnia 7 also has a built in FM radio with a dead simple interface. You have the current frequency in very large digits – swiping left and right changes the frequency and a swipe and release automatically searches for the next available station in that direction.

You can mark some stations as favorites, which will allow you to pin them to the homescreen. There are some limitations though – we didn’t see RDS or an option to play the sound through the headphones (their cord serves as an antenna) – the sound always comes out of the loudspeaker.

Audio output is quiet but clear

Samsung I8700 Omnia 7 did well in our traditional audio quality test. It's among the quietest handsets we have seen but it makes up for that with nicely clean output with audio tracks sounding just the way they were meant to. When attached to an active external amplifier (i.e. your car stereo or your home audio system) the device is doing an impressive job with the cut-off extreme bass frequencies the only thing to frown at.

When headphones come into play, the Omnia 7 remained a pretty solid performer and the worsened stereo crosstalk and intermodulation distortions are the only things that changed. 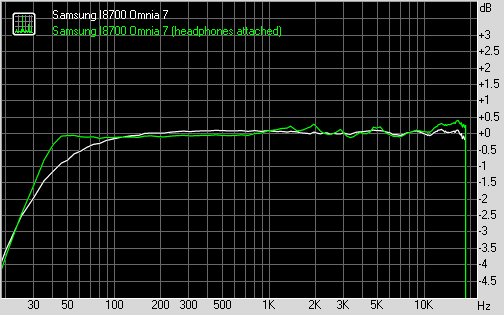