HD gets a Pro flavor

The Sony Ericsson Vivaz pro packs a 5-megapixel camera and is capable of taking photos of up to 2592 x 1944 pixels. There’s also a LED flash, but it’s better suited as a video light.

The Vivaz pro camera interface is quite comfortable. The viewfinder usually occupies the center of the screen with two black bars around it. The camera UI buttons are over the bars, so it’s not big deal. You could switch to 16:9 mode but that drops the photo resolution down to 3MP.

On the left side of the viewfinder there are five shortcuts. Those cover Scenes, Shoot mode, Focus settings, Exposure compensation and Auto mode.

The settings menu gives you another set of customizable options. Those include self-timer, white balance, flash on/off, effects, image stabilizer and picture size. You can also choose whether you'll see a preview of every taken snapshot and if the image orientation should be recorded in the EXIF info. The camcorder part of the camera supports a very similar set of customizable settings except the image stabilization.

The Sony Ericsson Vivaz pro camera caries over the cool features from the 8MP camera of the first Vivaz. For the autofocus settings, there’s face detection and touch focus, and there are other features too, like smile detection, geotagging and panorama mode.

As the name suggests, Touch capture allows you to focus on any particular subject in the frame by simply tapping on it in the viewfinder. The Vivaz pro will automatically focus on it and take the shot.

There are handy help buttons for most features, but you could just tap the Auto button and let the phone worry about picking the right settings – you just point and click.

Speaking of clicking, just like the other Vivaz, the Vivaz pro has two shutter keys – one for the still camera and the other for the camcorder. The still camera shutter can be half pressed to lock focus.

The Sony Ericsson Vivaz pro may have a 5MP camera rather than a 8MP one, but the images it produces are very pleasant.

The amount of captured detail is great – there’s a great balance between noise-reduction and sharpening and there’s no sign of the typical side effects of both. The resolved detail is great, even foliage - which usually gets an oil-painting look after the noise reduction - comes out quite well.

There’s one problem with the photos though – the contrast in all photos is low. The colors are accurate though.

We also snapped our resolution chart with the Vivaz pro. You can check out what that test is all about here. 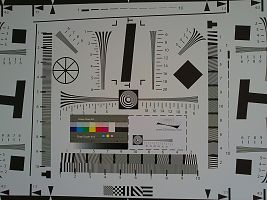 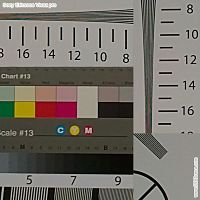 Probably the best feature of the Vivaz pro is the continuous auto focus during video recording - it allows it to act just like a dedicated video camera. We have a video demo below that shows the feature in action.

The frame rate hovers around and just below 24fps – depending on the scene, and under close inspection that might become visible.

As far as the 24 vs. 30 frames per second – this is one of those rare cases where more isn’t better. All of us are used to seeing 24fps as “movie quality” and faster frame rates have a certain look that many rec recognize as “that cheap camcorder look”.

Despite having different image sensors, the videos from the Vivaz and Vivaz pro are almost a match in video quality.

The quality of the Sony Ericsson Vivaz videos is nice with reasonably well-resolved detail and accurate colors. The contrast is low here too, like the still camera, but the sharpening is excessive, which sometimes leads to visible artifacts

We’re also pleased to report that the rolling shutter effect that the first Vivaz suffered from has been greatly reduced.

The Sony Ericsson Vivaz pro videos use an AAC codec with 48kHz sampling rate, which produces a much better audio quality.

And a demo of the continuous auto-focus feature in action: